Jerry Soles, a sheriff’s deputy, was home in Thomasville, North Carolina, getting ready to work a nightshift when he heard a strange noise in the next room. He immediately realized something was wrong with his wife, Heather Soles.

“I remember hearing him come over, but my eyes just stayed closed,” Heather said. “I didn’t have any control of myself. He went in and got my son and said, get 911 on the phone, I can’t get her to talk to me.”

It was a terrifying moment for the mother of two and her family. She was taken by ambulance to a local hospital where a TPA clot-busting drug was administered, and then Heather was airlifted for surgery to Novant Health Forsyth Medical Center in Winston-Salem, North Carolina, home to a comprehensive stroke center (one of two in the Novant Health system, along with Novant Health Presbyterian Medical Center in Charlotte).

Heather felt fortunate to survive the stroke and said she was particularly impressed that there had been a highly organized team waiting at the helipad. “I felt like I had the paparazzi,” Heather said. “There were a whole bunch of people there who were ready.”

That team got her to her surgeon, Dr. Don Heck, an interventional neuroradiologist and the director of neuroradiology and endovascular surgery at the hospital.

In those hands, Heather survived the stroke. But there still remained much work to do to get her life back on track.

Almost three-quarters of strokes occur in people over 65, but they can also happen to younger patients like Heather, just 42.

“Most people who have that type of stroke are older and have atrial fibrillation (also called AFib or AF). In her case, a younger person having a stroke, you have to look for other causes,” Heck said. She turned out to have a blood clotting disorder caused by a protein deficiency, Heck said.

Heck performed a procedure called a mechanical embolectomy, a relatively quick surgery where the clot is pulled from the brain mechanically by the surgeon rather than treating it with medication. Heck said Heather’s’ case wasn’t a typical one because there wasn’t a large clot, which meant it was more difficult to reach during surgery. Still, the procedure went smoothly.

The stroke changed everything for Heather. She’d been living a busy life working in an orthodontist’s office and taking care of two boys who play baseball. This would all be complicated by a post-stroke battle with anomic aphasia, a common side effect for strokes on the left side of the brain.

“For most people who are right-handed, all of their language function is in the left side of the brain,” Heck said. “With the language type of problem she was facing, you could think of it like all of a sudden you were dropped off in a country where you don’t speak the language. It’s not a mechanical problem. It’s that you don’t know what the words are for anything.”

Heather said that she can remember trying to speak to a nurse when she first woke up from surgery in the hospital and that none of the words she was trying to say would come out. The next day, however, when Heck came into her room to ask how she was doing, she greeted him back, saying “Hey.”

While that was an encouraging sign, returning to her old “talk-the-ears-off-a-billy-goat” self, as Heather put it, would take time.

She met with her speech therapist Stephanie Vestal three times a week for nine months. There were still many scary and frustrating moments for Heather. “I remember at home I was wanting a bucket on my back porch and I’d say get that orange thing, get that orange thing. My kids would say ‘bucket.’ And I’d have to say “bucket” three times,” Heather said.

Doing routine things were difficult – like going to the grocery store. When she got the total at check-out she didn’t understand the amount. Filling the car with gas or going to the bank – anything with numbers -- was also frustrating.

Learning how to think differently

To help, Vestal made Heather a card that explained she had aphasia in case she had difficulty in public and needed to simply show someone the card to explain. 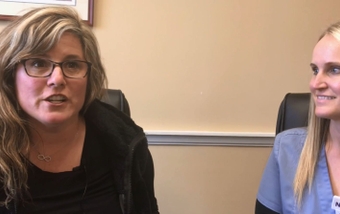 “When I first met Heather, she knew what she wanted to say but couldn’t think of the word. She was able to remember some names of close family members but couldn’t remember the names of other people and friends. She was unable to read or write anything over just a sentence or her name. She was also unable to do math,” Vestal said. “We targeted the aphasia first, the talking, and trying to help her come up with strategies.”

If Heather couldn’t think of a word, Vestal taught her techniques to think of an alternative word. Vestal would show Heather pictures and have her attempt describing different things. They progressed to reading and writing and math and all of the things she would have done for her job.

It became a challenge, and Heather, ever-motivated, began to thrive. “I loved coming in,” Heather said. “I would say, Stephanie, give me homework so I can do it on my days off. I wanted to be one of those people who my kids would say ‘My momma couldn’t talk, she could get around, couldn’t talk on the phone but here she is now doing all of those things.’

“Sometimes something would bother me and I’d just cry,” Heather said. “(Vestal) would just sit and listen and say this is what we need to work on.”

After nine months of three sessions a week, they gradually started meeting twice a week and then just once. Heather recently has gone back to work with a new job in the student employment office at High Point University, where she works directly with students and colleagues in a highly social environment. She’s back to watching her kids’ baseball games, which she loves.

All her friends and loved ones have the Heather that they remember back and are proud of her courage. And somewhere in Thomasville, as Heather might joke, a billy goat is missing his ears.

Are you at risk of stroke? Take our online stroke assessment now.

How physical therapy helped her beat vertigo at 82