School teacher Erica Pruett gave birth to her son, Walker Pruett, at just 26 weeks. He came into the world at a mere 1 pound, 3 ounces. He was so fragile that it would be five days before she could even hold him.

For the next three months, the team at Forsyth Medical Center Neonatal Intensive Care Unit in Winston-Salem, North Carolina cared for Walker. And for Erica, too. She was at her son’s side, day after day, week after week.

She didn’t know it at the time, but she and her husband, Jared, would forge bonds with the NICU that are still thriving today. She would have a second son spend several days in the unit as well and today Erica volunteers on a parent advisory panel. “When you’re here for so long,” Erica said, “they really do become like a part of your family.”

When Pruett discovered she had preeclampsia, her Eden, North Carolina ob-gyn sent her to a high-risk specialist in Greensboro, who told her the best NICU in the area was at Novant Health Forsyth Medical – a long two hours from the family’s home in Martinsville, Virginia.

Preeclampsia (formerly called toxemia) is a potentially serious pregnancy complication. The condition may be suspected when a pregnant woman has high blood pressure combined with another symptom, such as impaired liver function, kidney problems or new-onset headaches or visual disturbances. In this case, doctors recommended early delivery.

After Walker’s birth, Erica was with him each day and at the Ronald McDonald House every night. Jared and her mom tag-teamed so she was never without family.

“You don’t know what’s going to happen from one day to the next,” she said. “A preemie’s progress isn’t a straight line going upward; there are peaks and valleys. 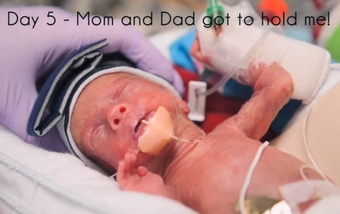 “We’d take one step forward and two steps back,” Pruett said of Walker’s early days in the NICU. “We were finally able to hold him on Day Five. Also that day, he came off the ventilator, but he had to go right back on. We’d make progress, and then we’d backslide. It was an emotional roller coaster.”

He would spend 80 days total in the NICU. A YouTube video capturing his progress has been viewed more than 2 million times.

‘Have you taken a break?’

Beyond caring for Pruett’s preemies, the staff took care of her, too. “The nurses were great about advocating self-care. They’d often ask: Have you had lunch today? Have you taken a break?”  Pruett recalled.

“The families are almost like a second family to us after we’ve taken care of them for a long time,” said Novant health nurse Becky Ritter, who helped care for Walker. “I’ve loved keeping up with Walker over the years and watched him grow. He’s one of those kids that, this is why we do what we do.”

Every team member was invested in her family, including Ann Smith, the director of Women’s and Children’s Health. “Ann isn’t stuck in her office,” Pruett said. “She gets to know the families in the NICU.”

It’s a mission for Smith, who leads the Maya Angelou Women’s Health & Wellness Center at Novant Health Forsyth Medical Center. Women and children’s health have been her twin passions during her 35-year career. During 25 of those years, she’s been a neonatal nurse practitioner in addition to an administrator. She still works as a nurse practitioner on weekends.

“My newborn was in the NICU 26 years ago,” she said. “I can never forget that. It’s part of the reason I want to be present for our families here. I can’t make decisions that impact our entire center without getting to know the families who are here.

As a member of the NICU’s Parent Advisory Board, Pruett now helps other parents of preemies. “When you have a child in the NICU for an extended time, you literally become lifelong friends with other parents around you,” she said. “As happy as we were to be home, it was weird not to be around my NICU friends anymore. I wanted a way to stay in touch and give something back.”

The Parent Advisory Board offers emotional support and raises funds for the NICU. Pruett and her cohorts helped raise more than $100,000 for crib cams at each bedside. These allow parents 24/7 remote visual access to their babies. Even before they’re able to hold them, parents can see them constantly via the bedside camera.

After a tough first pregnancy, the Pruetts worried a second one could be equally risky. Doctors said there’s no way to predict a recurrence. Preeclampsia was a factor during Pruett’s second pregnancy with son Barrett, but this time, she knew the signs and got diagnosed earlier – and put on bed rest earlier. 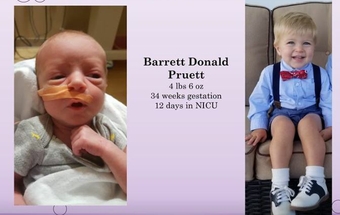 Today, you’d never know either Pruett boy was once in the NICU. “Walker had some speech and occupational therapy issues early on, but we’re past those,” the proud mom said. “Walker may be a little on the small side, but he has enough personality for three people. He was around so many different people as a newborn; he’s very social. Barrett has no issues at all.”

After those tumultuous months in the NICU, the best news is just how ordinary the Pruetts’ lives are now. Erica concluded, “Walker and Barrett are just normal little boys.”

Your newest family member may need urgent and advanced medical care at birth or soon after. Novant Health neonatal intensive care units have medical experts and advanced technology to help children who are born prematurely, have dangerously low birth weights or need treatment because of serious illness.