The exact scene plays out dozens of times a day in Novant Health hospitals from the North Carolina coast, to small towns, to Charlotte and the teeming suburbs of Washington, D.C.

A baby has been born. The sweet music signifies and celebrates the beginning of a new life.

The soft melody – titled “Brahms’ Lullaby” - sparks joy for those in the building who know what it means. The tune has stopped visitors in mid-bustle.

German composer Johannes Brahms wrote it 150 years ago. Pat Campbell adopted it for Novant Health in 1997. It’s been a staple at Presbyterian ever since, easing through hallways and lobbies from five to 25 times a day.

“It never gets old. I look forward to it every day because I know I’m going to hear it,” said Campbell, Novant Health’s vice president of OB-GYN services. “It definitely is something we’re very proud of because we know that the community feels that it’s important. It still, till this day, gives me goosebumps.” 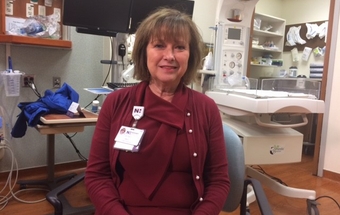 Robin Lipe knows the lullaby well. Two months ago, she gave birth to her third child (daughter Elizabeth). A nurse had activated the wall key – tucked away in the eighth-floor hallway – when Lipe’s sons Hunter (age 5) and Jack (4) were born.

“It is a simple thing, but so beautiful,” said Lipe, 36, of Charlotte. “It is just a sweet moment because you know some parents’ lives have changed for the better. When you’re in the (birth) process and you hear the lullaby, it’s soothing. It makes you think `OK, I’m going to get through this. We can do this.'”

After Elizabeth’s birth, the Lipes were being transferred from labor and delivery to a postpartum room. That route, typically taken 1 to 3 hours after birth, passes by the lullaby key. The traffic stopped and a nurse turned toward daddy Scott Lipe.

“You want to turn the key?”

“He was all excited,” Robin Lipe said, laughing.

Campbell borrowed the Brahms’ lullaby idea when she learned other hospitals used it. She thought the music sounded “amazing.” Figured it was low-cost and (correctly) would have a very positive outcome.

The rules are simple, and flexible because nobody complains when babies are born. No music between 9 p.m. and 7 a.m. (rest time). Each family decides who turns the key to trigger the song, and when. Sometimes it’s delayed until older siblings arrive. Or maybe when out-of-town relatives bounce in. But is there a second key turn if someone’s plane is delayed, or friends show up in waves?

“Of course,” said labor and delivery nurse Lisa Webster, who has been with Novant Health since 1987.

“It’s neat to hear the lullaby because a new birth has occurred, a new child has come into the world.”

Webster and fellow nurse Toni Piercy, who also has been at Novant Health since 1987, have heard the lullaby thousands of times. It remains special for them because not long after it was established, newborn nursery nurse Lisa Davis Allen died unexpectedly. 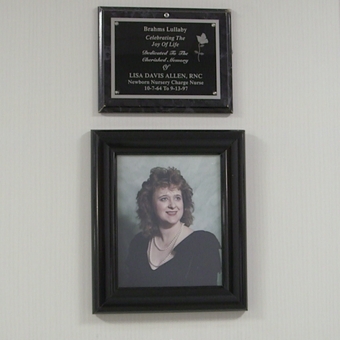 Allen’s colleagues approached Campbell about dedicating the lullaby tradition to her memory. There’s a plaque honoring Allen on the wall outside the nursery.

“Lisa was a vivacious nurse,” Piercy said. “She was very caring. She loved her work and taking care of babies. Out of her sadness grew an expression of life.”

The lullaby in Novant Health hospitals

Brahms’ Lullaby is played in all but one Novant Health facility where babies are born, with slight variations:

Novant Health Brunswick Medical Center: A nurse activates the tune, which is heard throughout the facility. In September, the lullaby played for the baby who was born here while the facility was on lockdown during Hurricane Florence.

Novant Health Huntersville Medical Center: The lullaby plays when the patient is being discharged. It is heard throughout the hospital, but not in patients’ rooms. The family decides who gets to turn the key to begin the music.

Novant Health Matthews Medical Center: A hugs (infant security) tag is placed on the child immediately after birth. Then, the medical unit receptionist initiates the lullaby to play throughout the building. The parents or anyone in the family can ask for it also to be played later, for example, like when a sibling visits for the first time.

Novant Health Mint Hill Medical Center: The family chooses who gets to push the button to play the lullaby. It is heard throughout the new hospital, which delivered its first baby Oct. 4.

Novant Health Rowan Medical Center: One of the new parents presses the button to activate the lullaby on their way to the hospital’s postpartum unit.

Novant Health Thomasville Medical Center: No lullabies are played after 9 p.m., as to not interrupt patients’ rest. The song is activated by the mother – or someone she designates – by pushing a button as she’s leaving labor and delivery, headed to her postpartum room.

The maternity specialists at Novant Health are here to ensure you and your baby get the personalized care you need from prenatal care to delivery — and beyond. Your journey starts here with our birth preparation guide.

'Look at what she does every day'