How artificial intelligence can narrow disparities
By Cliff Mehrtens

The stroke patient had been rushed to the rural hospital emergency room, unable to move his entire right side, speak or understand what was said to him.

Soon afterward, because of fast treatment and the technology that makes it possible, nurse Debbie Moser noticed the patient had raised his right arm. Then he clenched and unclenched his hand. He was well on the way to recovery.

At the center of his quick recovery was a video-based platform that provides remote access to a neurologist, the expert in stroke care. This technology helps to synchronize stroke care and reduce delays that can stand between patients and life-saving treatments.

“I've been a nurse for 41 years, and in times gone by that gentleman would have ended up in a nursing home for the rest of his life at the age of 61,” Moser said. “That treatment and this wonderful tele-neuro technology gave that person his life back.”

Moser is the stroke care coordinator at Northern Regional Hospital in Mount Airy, North Carolina (population 10,000). It is among the areas where Novant Health’s enhancement of existing tele-stroke (also known as tele-neuro) services is narrowing the rural disparities in stroke care. People in rural areas face challenges including higher poverty rates and less access to health care that can lead to poor health. In general, rural residents in the U.S. tend to be older and sicker than their urban counterparts.

The program is called Viz.ai, and is designed to reduce the delays by alerting stroke team members to large vessel occlusion (LVO) strokes and providing a patient’s scan results in real time.

In a rural hospital setting, it often takes at least an hour to receive the results from some of the more critical scans. Viz.ai sends the scan immediately to the “cloud” to be read by artificial intelligence. If Viz.ai sees a large blood clot (at least 85% of strokes are due to blood clots), it sends an alert to the rural emergency physician as well as the interventional neurologist at Novant Health. The 60-minute wait time has been reduced to under 10 minutes in most cases. For patients experiencing a large stroke, this is a tremendous addition to their care. 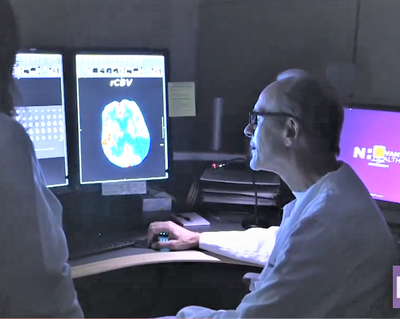 A patient's scan images can be examined in real time.

The further a patient lives from a large hospital, the greater chance that time could be lost before treatment. Every minute a stroke is left untreated can mean the difference between a permanent disability and full recovery. Up to 2 million brain cells die every 60 seconds when oxygen and nutrients are cut off.

But now, the on-site care team at a rural hospital can connect via video with a neurologist, who can consult with the care team at the patient’s bedside, view and discuss the results of diagnostic tests and perform other necessary exams.

“Merely having the experts on-site, even though they're remoting in on a camera, but having their expertise available to the patient and the family, immediately changed stroke care,” said Dr. Jason Edsall, chief medical officer and the director of the stroke program at Northern Regional Hospital.

After a neurology team examines a stroke patient’s brain scans, the medication tPA often is recommended to break up the blood clot and restore blood flow to the brain. To be effective, tPA has to be administered within four and a half hours of the first sign of stroke. That time can be reduced when there’s a neurology team available via video, rather than a patient being transported miles away to a stroke center.

The number of strokes has remained about the same in Mount Airy, but the administering of tPA has grown from about once per year to about two or three times a month, Edsall said.

“What excites me is that the program has become bigger than a neurologist on a screen,” Edsall said. “It's become a lifestyle, it's become embedded in the fabric of care we provide. We no longer rely on it as an adjunct. The care of the stroke patient has become part of what we do.”

Dr. Mark Ippolito, Novant Health’s lead teleneurology physician, is on the other end of the virtual video care of a stroke patient. Through Viz.ai, the tele-providers are able to quickly see the advanced CT images (CTA or CT angiography of the head and neck), which allows for identification of large vessel occlusions or large strokes. This enhancement of the service allows the tele-providers to determine what level of care is needed.

“The ability for us to lay eyes on the patient, get their history and make sure they get the right care at the right time is the huge plus for this program,” Ippolito said. “We're bringing stroke center level care to facilities that are smaller and otherwise would not have access to it.”

More than 795,000 people in the United States have a stroke each year, according to the Centers for Disease Control and Prevention. In 2018, strokes accounted for 5,072 deaths in North Carolina.

Find the stroke care you need

Many of the stroke patients live in rural areas, where a hospital or doctor’s office may be far away. That, for example, can force a decision about taking time off from work for a doctor’s appointment. For a city resident, that might be a 10-minute drive. For rural residents, that could be an hour in each direction, which could add up to a half-day off from work. Rural patients in lower-paying jobs often don’t have the time or financial flexibility to do that.

That puts them at higher risk for serious health issues. Ippolito said people in rural areas should maintain regular checkups with their primary care physician, and try to live a lifestyle that prevents hypertension (high blood pressure), diabetes and high cholesterol, and doesn’t include smoking.

In addition, managing a healthy weight, exercising, drinking alcohol in moderation and following a diet rich in fruits and vegetables can reduce your risk of stroke.

Stroke survivor is `living the life he wants’

Do not delay stroke treatment for fear of COVID-19