“I was like, ‘Mammogram?’ That’s just for women.”
By Page Leggett

Reggie Hogans describes himself as macho, and he’s not exaggerating.

The retired New York City police detective was among the first responders to assist at ground zero on 9/11. He retired from the NYPD in 2004 after working his way up from patrol officer to detective squad. 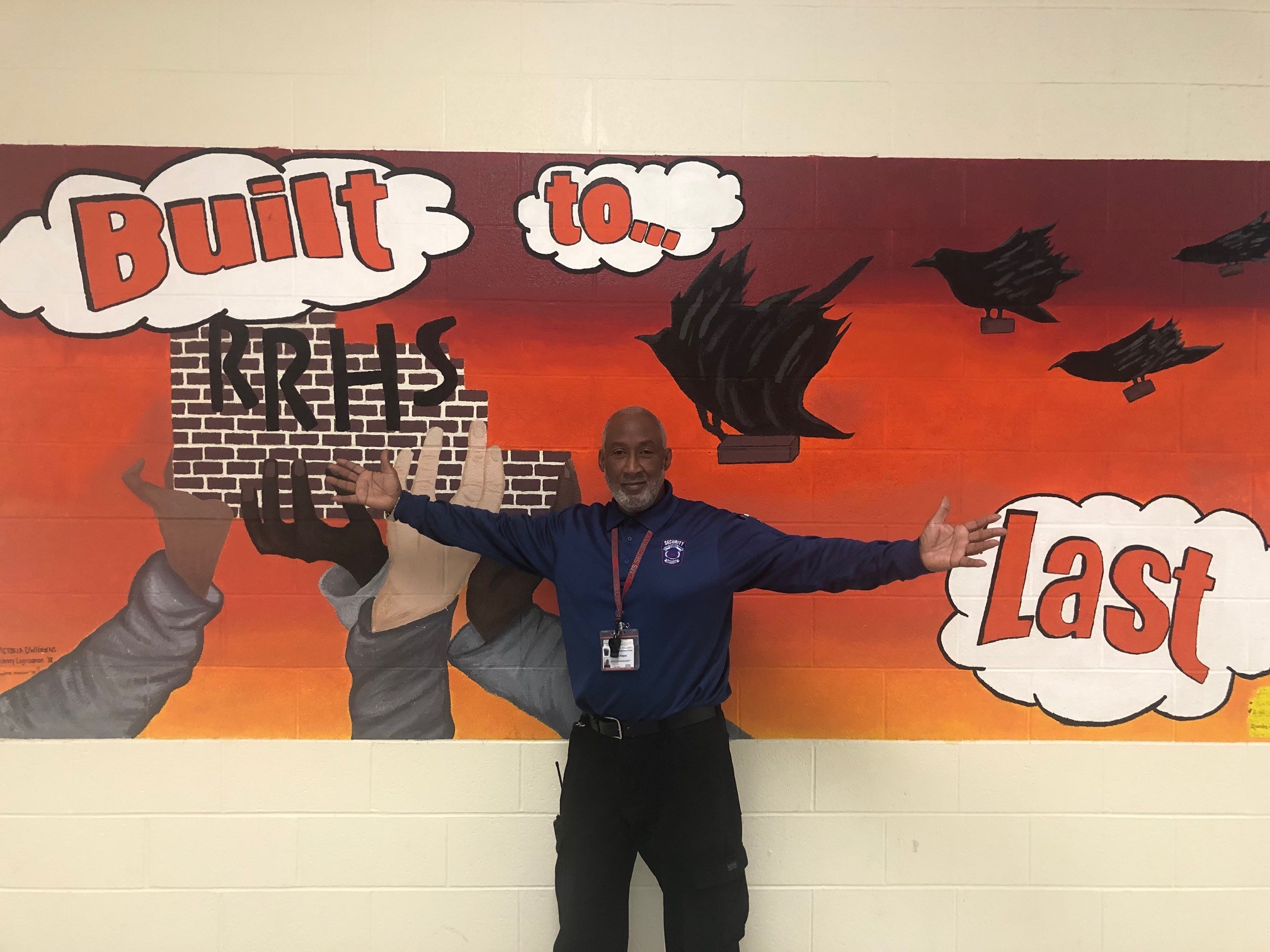 Reggie Hogans stands in front of one of the murals at Rocky River High School.

The retired cop didn’t retire completely. He moved to Charlotte, North Carolina, in 2004 and became a school security officer at Rocky River High School in Mint Hill. His title doesn’t convey all he does for his students. “I’m sort of a guidance counselor and a social worker,” he said. “They know I’m gonna make sure they get across that stage and get their diploma.”

The student body is 57% African American and 28% Hispanic. A little more than 60% of students are economically disadvantaged, and only 26% of those entering ninth grade are considered proficient. Hogans loves his kids and wants to be there for them in hopes they can get ahead in life. And they feel the same way about him. “These are the kids who need me,” he said. “I’m a father and mother figure to some of them.”

When he found out he had cancer, he was determined to keep it from his students. He didn’t want them to worry.

He was watching TV in July 2018 when he touched his left chest and felt something odd under his skin. “I felt a lump above my nipple, and it just didn’t feel right,” he said. “My doctor said it might be a cyst, but he still wanted me to get a mammogram.”

But after the mammogram, the doctor recommended a biopsy. It revealed he had breast cancer. “I thought the diagnosis was a mistake,” Hogans said. “I mean, dude, breast cancer? I had only heard of one man – the actor Richard Roundtree who played Shaft – who’d had breast cancer.”

Matthew Knowles, a music industry executive and father of Beyoncé and Solange, had a mastectomy and three lymph nodes removed after he learned he had breast cancer.

Dr. Lori Gentile of Novant Health Carolina Surgical in Huntersville, North Carolina, told Hogans breast cancer has increased among men. The breast surgeon and surgical oncology specialist said, “Since men have so little breast tissue, often times the nipple is involved, and most men are treated with a simple mastectomy.”

Hogans wondered how he got cancer, but there are no definitive answers. He had no significant family history. “As in women, family history is a risk factor for some men,” Gentile said. “About 30% of males have a family history of breast cancer. But a lot of times, it’s spontaneous and can’t be attributed to one thing.”

A 2019 study found that "among men, overall breast cancer incidence rates were 52% higher in black than in white men ... whereas among women, rates were 2% lower in blacks than in whites." It isn't yet known why the disparity exists; more research is needed. But the important takeaway is: If you're a man who notices changes to your chest (nipple pain or discharge, enlarged lymph nodes under the arm), you should see your doctor right away. If you're a Black man, getting to the doctor is even more important.

Treatment options for men with breast cancer are the same as those for women. For Hogans, doctors recommended several months of chemotherapy to shrink the tumor, outpatient surgery (lumpectomy) to remove it and radiation to reduce the risk of a recurrence.

Men with breast cancer typically have mastectomies, Gentile said. It’s difficult for surgeons to preserve the nipple because men have such little breast tissue to operate with, so she offers male patients the opportunity to meet with a plastic surgeon to discuss nipple reconstruction. In Hogans’ case, Gentile was able to preserve the nipple.

The first couple of days of chemo made him sluggish. Side effects included temporarily losing his appetite and sense of taste and having a dry mouth. But they weren’t enough to keep him from the gym. He went twice a week during treatment.

“I wanted to stay active,” he said. “When my family suggested I slow down, I said, ‘I can’t just lay in the house. I’ll rest when I’m in the grave.’ That’s my motto. I’m busy. I’m always doing something, fulfilling my purpose in life.”

Thinking of his students, he arranged his treatments and doctors’ appointments for before or after school. “I would go to my radiation treatment and go right to work,” he said. “And sometimes even to basketball games. People, including my principal, couldn’t believe it.”

There was another, more noticeable side effect: hair loss. He joked with his students that he was trying out a new look – a bald look – so they wouldn’t suspect cancer.

Treatment is behind him now. He takes hormone therapy (an anti-estrogen pill) as a safeguard against a recurrence. (Around 75% of women with breast cancer have an estrogen-sensitive form of the disease. That figure is more than 90% in men.) And annual screening mammograms are recommended for men who’ve had breast cancer for two to five years post-treatment.

A lot of men don’t realize they can even get breast cancer. “Consequently, men typically present with a later stage,” Gentile said. The incidence of breast cancer in men, while increasing slightly, is still too low to warrant widespread screening mammography.

Faith, family – including his wife and kids – and supportive colleagues helped Hogans get through cancer. “God has full control over everything,” he said. At first, he was reluctant to share the news. But he wants to educate men that it can happen to them. “I’ve been telling my male friends: Don’t be afraid to explore your body,” he said. “If you feel something abnormal, get it checked. Don’t sit back and wait.”

You don’t have to face your breast cancer diagnosis alone.