The problem with PCOS

You may be unfamiliar with polycystic ovary syndrome, or PCOS, unless you or a loved one is affected. Yet, as the most common endocrine disorder among premenopausal women and the leading cause of infertility among women, PCOS is a syndrome you should know about.

Far-reaching symptoms, no clear cause

“There’s not a unifying, single cause for PCOS,” said Dr. Pooja Raghavan at Novant Health Forsyth Endocrine Consultants in Winston-Salem. “The ovaries were blamed for a long time, but there’s more to it than that. Clearly genetics have something to do with it. Lifestyle has something to do with it. Insulin is affected. The adrenal glands are affected. It’s far-reaching.”

PCOS conservatively affects 5-10 percent of women. Most women are diagnosed in their 20s and 30s, but the syndrome can affect girls as young as 11 years old.

Charlotte resident Regan White didn’t get her official PCOS diagnosis until her 30s, though she suspected the imbalance for a long time. “I always suffered from irregular, heavy periods and dark, excess hair growth,” White said. “I was repeatedly told my male hormone levels were within normal range. I was prescribed birth control and was told that would help level things out a bit.” 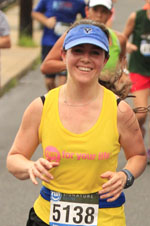 Regan White runs a half marathon.

By her late 20s, she’d quit more than a decade of birth control due to negative side effects. “I figured I’d just deal with the heavy, cramping periods,” White said. “By my late 20s, I was carrying 10-15 extra pounds thanks to an inactive job, and no matter how many half marathons I ran, the scale wasn’t moving.” She didn’t think anything was wrong until she started experiencing blood sugar issues.

“I was dizzy all the time,” White said. “The room would spin. I’d get shaky before, during and after meals. I worried that I was diabetic.”

Her primary care physician referred her to an endocrinologist who confirmed the problem was PCOS and resulting insulin resistance.

“The standards for diagnosing PCOS are constantly changing; my testosterone had always been high but not high enough for early standards to classify me as someone with PCOS,” White said. “At first I was really angry I hadn’t been appropriately diagnosed for so long. Then I was mostly afraid because I felt so horrible.”

As White discovered, there isn’t one single test that can diagnose PCOS.

“It’s a constellation of several factors that comprise a person with PCOS,” Raghavan said.

Testing can include a full family history, a physical exam, blood samples and a pelvic exam or ultrasound to check the ovaries. A woman who satisfies two of the following three conditions may be diagnosed with PCOS:

Treatment that hinges on diet and lifestyle

Like PCOS itself, treatment isn’t cut and dry, either.

“There’s no magic bullet for PCOS, unfortunately,” Raghavan said. “This isn’t like hypothyroidism where we can put you on a thyroid pill and expect tremendous degrees of improvement. In the case of PCOS, medication and lifestyle changes work hand in hand and neither one really works well without the other.

“Studies show that PCOS patients who lose 7-10 percent of their body weight and maintain it for three years or longer have a greatly reduced risk of diabetes,” Raghavan added. “Lifestyle changes work better than drugs alone to reduce PCOS symptoms and your risk for more dangerous, related conditions down the line.”

It’s harder for women with PCOS to lose weight because of how they process glucose. Their bodies tend to be resistant to insulin. Women with PCOS are advised to limit processed, sugary foods, cut carbohydrates and add more whole grains, fruits, vegetables and lean meats to their diets. For women who don’t want to get pregnant, birth control pills can control menstrual cycles, reduce male hormone levels and help clear acne.

“If someone has PCOS and weight issues or impaired blood sugar control (especially with a fasting blood glucose over 100 mg/dL or an A1C over 6 percent), we’d put them on Metformin – an old diabetes drug that’s used to aid insulin sensitivity – or Metformin in combination with birth control,” Raghavan said.

If increased hair growth and acne are a concern, anti-androgen medications such as Spironolactone and Finasteride are available but should be combined with birth control pills due to their high risk for birth defects.

Women with PCOS have more difficulty getting pregnant and miscarry more often than women without PCOS, Raghavan said. Women with PCOS who are trying to conceive are recommended to try for a year without any fertility assistance, Raghavan said, as many patients are able to conceive unaided. After that time, the fertility drugs Clomid or Serophene are usually used as the first line of defense before more extensive fertility measures are tried.

A marathon, not a sprint

White opted to try diet and lifestyle changes before resorting to medication. She told us back in 2015, “I’m still running half marathons, but I hardly eat any carbs anymore,” she said. “It’s been a process, but I’ve managed to keep 10 pounds off since my diagnosis in 2011. It’s been enough to keep my levels in check.”

“PCOS is definitely a marathon, not a sprint,” White said. “It’s a complete lifestyle change. But I feel so much better. It’s comforting to know I’m doing all I can to better manage this condition.”

For Raghavan, that’s all that can be asked. “Patients can override the best that medicine can offer by doing their worst in their food and exercise choices,” she said. “No one is perfect. But people with PCOS can do the best they can.”