She has battled back from a cancer diagnosis – twice

‘It always happened to someone else’

The first time Tammy Coulter was diagnosed with cancer, she had no signs or symptoms. A routine mammogram had turned up stage 0 ductal carcinoma — a cancer she couldn’t see or touch.

“I think I was just in shock because it always happened to someone else,” Tammy says. “When they told me it was best-case scenario — stage 0 — I just remember, my nurse navigator handed me this huge book, and she said: ‘This is all about breast cancer. You can take this home.’ I said, ‘Absolutely not.’ I just wanted it all to go away.”

Eventually it did, after a mastectomy on her left breast with clean margins and no sign of cancer infiltrating the lymph nodes.

Then, it came back.

In 2018 — just two years after her initial diagnosis — Tammy found a lump under her left arm. For about six months, she thought it was scar tissue, left over from her mastectomy and reconstruction. But when she went in for her mammogram in October of that year, she had it checked. The lump wasn’t scar tissue; it was triple negative breast cancer.

“I had a less than 2 percent chance of my cancer coming back. There was nothing in my lymph nodes. The surgeon felt very, very confident,” Tammy recalls.

And yet there it was. Tammy was 48 years old. 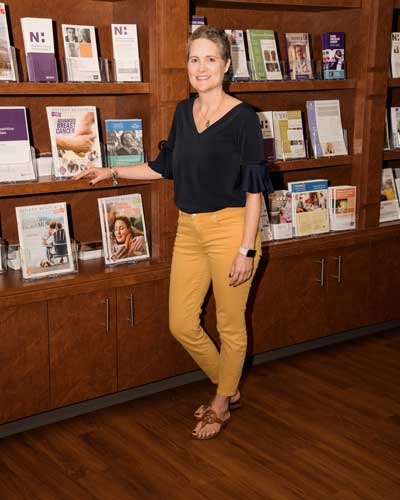 The treatment for Tammy’s first bout with cancer was fairly straightforward. She had a mastectomy with reconstruction — no radiation, no chemo. She was back at work several weeks later.

“It was pretty much picture perfect — the way it should have gone,” she recalls.

When she was diagnosed with triple negative breast cancer, the treatment plan was far more rigorous. She had surgery at Duke Cancer Institute, where her medical team found the cancer had invaded one lymph node, and then began a treatment regimen at Novant Health Forsyth Medical Center that included 12 rounds of chemo and 30 rounds of radiation.

At the time, Tammy’s daughter was 17 and her son was 8. And as her treatment began, she had sequestered herself away from the entire family.

“It was the middle of winter, so I went for eight weeks without my kids getting too close to me. Everybody was trying to make sure I didn’t get sick. I know it was hard for them. It was very hard for me because we’re a very affectionate family.”

She did lose her hair, but she embraced it, walking the runway during the Magnolias and Mimosas fashion show put on by the Kernersville Chamber of Commerce.

“I decided, why not? I was bald, but this would be a really good chance to show other women that it’s OK to be bald. This happens. This is life. This shouldn’t define you as a person,” she explains.

By chance, the emcee for the event was Judith Hopkins, MD, Tammy’s oncologist.

“That was really kind of special,” she recalls. “That whole day, I was in my own little zone.”

When she was first diagnosed with cancer, Tammy was focused solely on getting through it, being done with it, fixing it.

“I didn’t want anything pink. I didn’t want to be part of that club,” she says. “Just tell me what I need to do, and that’s what we’re going to do.”

The second bout has been very different. She battled a different, more dangerous cancer, with a more aggressive treatment plan. The chances of it coming back are higher. And she’s no longer a reluctant member of the club.

Tammy and her husband own a brewery in Kernersville, and during those early days of treatment when she felt a pressing need just to get out of the house, she’d head there.

“I hardly had any hair, and I would go in and talk to people,” Tammy recalls. “I can’t tell you how many people approached me to say, ‘I’m a 10-year survivor.’ ‘I had this type of cancer.’ I think it just gave people a chance to tell their story.”

Cancer is serious, but not all day, every day. There are moments of levity that show up, mostly when you least expect it.

For Tammy, one of the most memorable came on the very last day of her radiation treatment.

She was getting ready, going about her day, and she heard an “obnoxiously loud car, truck, something” driving through her neighborhood. She had no idea what was making all the noise. Then, her husband came in and told her it was her ride.

“I went to the front door, and a friend of ours had driven this pink fire truck to my house to drive me to the hospital for my last treatment,” Tammy recalls with a laugh. “We took lots of funny pictures.”

These days, Tammy sees Dr. Hopkins every three months for blood work and a physical, and she’ll continue that schedule for at least a year.

“Right now, my goal is to get to two years with no return of cancer. Then, my chances of a return go down greatly. After five years, it goes down even more,” she says.

It’s still a struggle to live with the uncertainty.

“You don’t get sick and not think about it anymore,” she says. “But as hard as it is sometimes, you can’t live in fear. It may come back, and it may not. And something else may happen in between. You just have to kind of shake it off and live your life as best you can and pray that it doesn’t come back. You can’t control it, even though you’d like to.”

Tammy’s right. Life is full of unexpected joys and challenges. What we can control is what we do to help others. That’s why we’re looking to broaden access to mammograms for under-served and uninsured women across our region. Early detection saves lives, and every gift to our Think Pink Fund goes directly to a life-saving 3D mammogram to someone in our community. Help us today by giving whatever you can to support the cause. No more excuses. Just more mammograms.