A smile spread across Nancy Keshian’s face as she approached the starting line. With laces tightened and hair still too short to tie into a pony tail, Keshian was ready to go. This half-marathon symbolized a new beginning for the breast cancer survivor. After chemotherapy, surgery and radiation treatment, Keshian said that completing the race was her “I’m back” moment.

Anxiety, fear and emotional distress are common barriers for many women as they try to fully return to life after cancer. They often mourn the physical changes to their bodies. They also worry about the possibility of recurrence.

Today, 10 years after Keshian’s milestone race, she shares the lessons learned in life after cancer. Rather than being defined by the disease, she now views her diagnosis as a blip on the radar and an opportunity to have witnessed the grace of God and others.

Keshian spent the first nine years of her life in a small coal mining town in Cabin Creek, West Virginia. It was there that she and her four siblings would camp in the woods and flatten pennies on the railroad track.

“It was a great place to grow up,” she said. “My parents made sure that we were grounded in family, faith, community service and the simplicity of life.”

Keshian went on to study biology at the University of Virginia before enrolling in the physician assistant program at Wake Forest University in 1981. While in PA school, she met her future husband, Rich. The couple got to know each other by serving together as Young Life leaders in Winston-Salem.

“We were both externally focused,” she said. “So it didn’t surprise him when I shared that I wanted to go on a medical mission trip to India as one of my clinical rotations.”

After she returned, Rich proposed and the couple married in 1985. They went on to have three boys and Keshian transitioned to stay-at-home mom – which she said was the best job she has ever had.

‘It came out of nowhere’

“I was shocked,” she said. “I had no family history and it just came out of nowhere.” She hated breaking the news to her kids, who were in high school then. Richard would shave her head.

She had eight rounds of chemotherapy, followed by multiple surgeries including a bilateral mastectomy at Novant Health Medical Park Hospital, and finally radiation therapy.

“It was sad. But also a deepening time for my faith,” she said. “I was surprised by the kindness of my friends. The people that rallied around me and told me that I looked pretty when in fact I looked like death warmed over.”

‘I felt better when I continued on’ 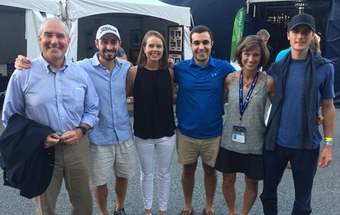 The Keshian family at the Winston-Salem Open.

Keshian’s cancer was in complete remission by December 2009. She went on to have her reconstruction surgery in April 2010 and then shifted her focus to the half-marathon.

“I truly began to feel better when I continued on with life,” she said. “When I pushed myself even when I didn’t feel like it. I’ll never forget crossing the finish line and thinking, ‘I’m back.’”

For Keshian, being back also meant finding new ways to serve the community. The Winston-Salem Open proved to be a natural fit.

“My entire family loves to play tennis,” she said. “So, when I learned that the community was going to start hosting a new tennis tournament, right after I finished my last treatment, I was all in.”

Since 2010, the family has faithfully served as volunteers. “It doesn’t matter if it is a tennis tournament or a cancer diagnosis, we are at our strongest when we link our arms together and serve one another.”

Keshian learned this lesson from a dear friend who lost her own battle with cancer. Despite a much more severe prognosis, her friend delivered tulips to Keshian after her very first chemotherapy treatment.

“I have grown to see trials as opportunities rather than inconveniences,” she said. “Opportunities for kindness.”

Today, Keshian, 59, views her cancer diagnosis as a time she experienced grace and as an opportunity to encourage other women to keep the faith and to finish the race.

About 1.7 million new cancer cases are diagnosed each year in the U.S. Here at Novant Health, our focus is on one — yours.