How two moms became friends at the NICU

Crystal Perkins was alone, far from home and scared. A pregnancy complication caused the 40-year-old single mother from Danville, Virginia, to deliver her first child prematurely at 24 weeks.

It was at Novant Health Forsyth Medical Center in Winston-Salem that she learned that her 1 pound, 9 ounce “miracle baby” would need to stay in the neonatal intensive care unit (NICU), long after her own discharge from the hospital. Through tears, she said a prayer, packed her bag, kissed her baby girl goodbye and mentally prepared herself for the one-and-a-half hour drive back home.

Her prayers were answered a few weeks later in the form of a friend made in the NICU. Another mother, with a similar story, introduced herself. And so it was that two women from different backgrounds in life formed a friendship in the midst of heartache, faith and motherly love.

Perkins always wanted to be a nurse. For 16 years, she worked as a certified nursing assistant, before switching careers to work in mental health.

“I love people,” she said. “I’ve learned that all of us have different issues in life, but you have to have compassion and faith to survive.”

Faith was needed when she was informed at 22 weeks, just over halfway through her pregnancy, that she had a weakened cervix (sometimes called an incompetent cervix) caused by pressure from the baby. This condition occurs in about 1 out of 100 pregnancies, and it may result in a miscarriage or a premature delivery.

Perkins was admitted to the hospital on Oct. 2 and two weeks later, she gave birth to a relatively healthy Isabella “Birdie” Perkins on Oct. 13, 2018.

Perkins named her daughter Isabella, which means dedicated to God in Hebrew. But, it was her fun-loving nickname “Birdie” that stuck at the hospital. 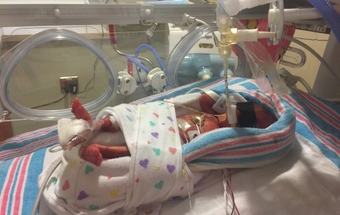 Birdie stayed in the NICU for more than three months

“Everything was going fine until I realized I would have to leave my baby behind in the NICU,” she said. “They discharged me on Oct. 15, but because Birdie was so small and needed constant monitoring, she stayed more than three months in the hospital. As you can imagine, I freaked out.”

Meanwhile, Perkins had to return to life as “normal” which meant going back to work. “I had a really hard time concentrating with my heart and baby somewhere else,” she said. “Fortunately, the hospital has a streaming service, so I could check on Birdie with my phone.”

A place to stay

Perhaps the hardest part of the whole ordeal was the distance between her home and the hospital. It meant Perkins could only visit on the weekends.

That’s when one of the NICU nurses recommended that Perkins seek help at the Ronald McDonald House in Winston-Salem. Since 1984, it’s served as a “home away from home” for families of children who are receiving medical care.

“The Ronald McDonald House was great,” she said. “They gave me a place to stay during my weekend visits. They also helped me with meals to eat and transportation to and from the hospital.”

Meanwhile, Birdie was in good hands at Forsyth Medical Center. The NICU is an advanced-care 56-bed unit run by a team of highly-trained and experienced providers. On average, the NICU cares for 1,100 premature babies every year.

It was at the hospital that Perkins celebrated her 40th birthday. “I’ll never forget how the NICU staff surprised me with a party,” she said. “They brought me lunch, a cupcake, a bunch of gifts and they sang to me.”

When her pregnancy was at 28 weeks, Gwyn, a stay-at-home mom from Thomasville, learned she had placenta previa, a dangerous condition in which the placenta lies low in the uterus and partially covers the cervix. As a result, Gwyn was admitted to Forsyth Medical Center where she delivered her son, Nathaniel, on Dec. 13.

At 3 pounds, 3 ounces, Nathaniel was transported to the NICU where he stayed for 47 days. Nathaniel was placed in the incubator beside Birdie and the two moms quickly became friends.

“Outside of my own mother, who was absolutely wonderful, I really needed a friend,” Perkins said. “Nathaniel was Breana’s third child, so in a lot of ways, Bre was able to give me advice and tips about things like breastfeeding.”

Gwyn added, “Our friendship means more to me than words can express. To have someone essentially walking in the same shoes as you, encouraging you and backing you up, it’s an awesome feeling.”

After celebrating Thanksgiving and Christmas in the hospital, Birdie went home on Jan. 6, 2019. Nathaniel was discharged a few weeks later. Since then, Perkins and Gwyn have remained in constant touch via daily phone calls, text messages and social media. But work, life and the sheer distance between them has prevented the friends from reconnecting in person. 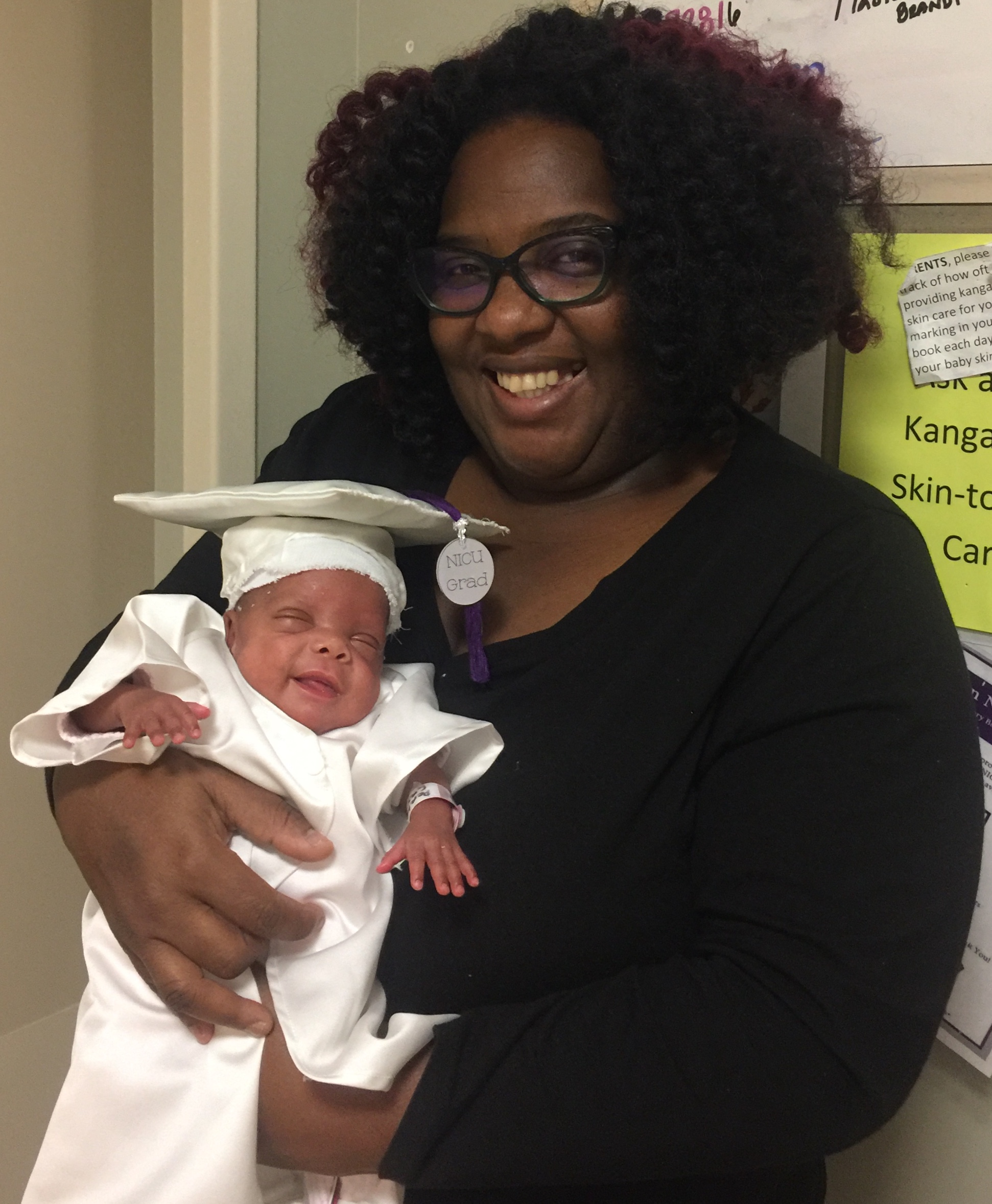 A nurse made Birdie a graduation outfit which she wore on her last day in the NICU.

“That’s why we have both had the annual NICU reunion circled on our calendars,” said Perkins. “Birdie and I could not wait to return to thank all of the staff and to of course, catch up with Bre and Nathaniel.”

For more than 25 years, the annual neonatal intensive care unit (NICU) reunion at Forsyth Medical Center has brought hundreds of families back to the hospital to celebrate with staff and to reconnect with friends. This year’s theme was Dr. Seuss and took place on Sept. 21.

One caregiver Perkins reconnected with was Amanda Watson Fuller, a respiratory therapist that helped Birdie transition off the ventilator. “Making that transition is always touch-and-go for NICU babies because you are hopeful that they will be strong enough to breathe on their own,” said Watson Fuller. “And let me tell you, Birdie did great, she flew!”

Watson Fuller was later invited to attend Perkins’ tea party, designed by friends as a post-baby shower celebration since she did not get to have one before Birdie arrived. “It was an honor for me to be invited,” she said. “We have remained close friends and it is always nice to see that we are making a difference.”

Ann Smith, the director of Women’s and Children’s Health at Novant Health Forsyth Medical Center, has taken part in the reunion since the beginning. “This event allows families to reconnect and to share with us how well their children are doing,” Smith said. “To be honest, I think it is even more rewarding for our team members.”

Looking forward, Perkins said that her experience at the hospital has inspired her to go back to school to become a nurse. “I want Birdie to see that nothing is impossible with faith, family and friends backing you up.”

If you are expecting the newest member of your family to arrive a little bit early, you can trust that the neonatal intensive care unit (NICU), will do everything possible to take care of you and your baby. The maternity services offered at Novant Health Forsyth Medical Center include high-quality care before, during and after your delivery.

Learn more about the NICU

When baby comes early? A NICU provider has been there