Doctors weren’t sure Josie Boswell was alive shortly before she entered the world 15 weeks early, weighing less than 1 pound.

Complications had put her young life in a risky position. Her mother, Sara Boswell, had a form of high blood pressure known as preeclampsia and the placenta holding Josie had a hole in it.

But an army of specially trained nurses and doctors, along with Josie’s fight to live, got her through one obstacle after another.

The neonatal and pediatric intensive care unit teams weren’t just there for Josie. They were also there for Sara and her husband, Whit, the entire time.

“I have stood and cried with the Hemby staff,” Sara said. “I have screamed and yelled with them. They’ve held us. They’ve laughed with us. They have literally been there for the good and bad and supported us no matter what we needed.” 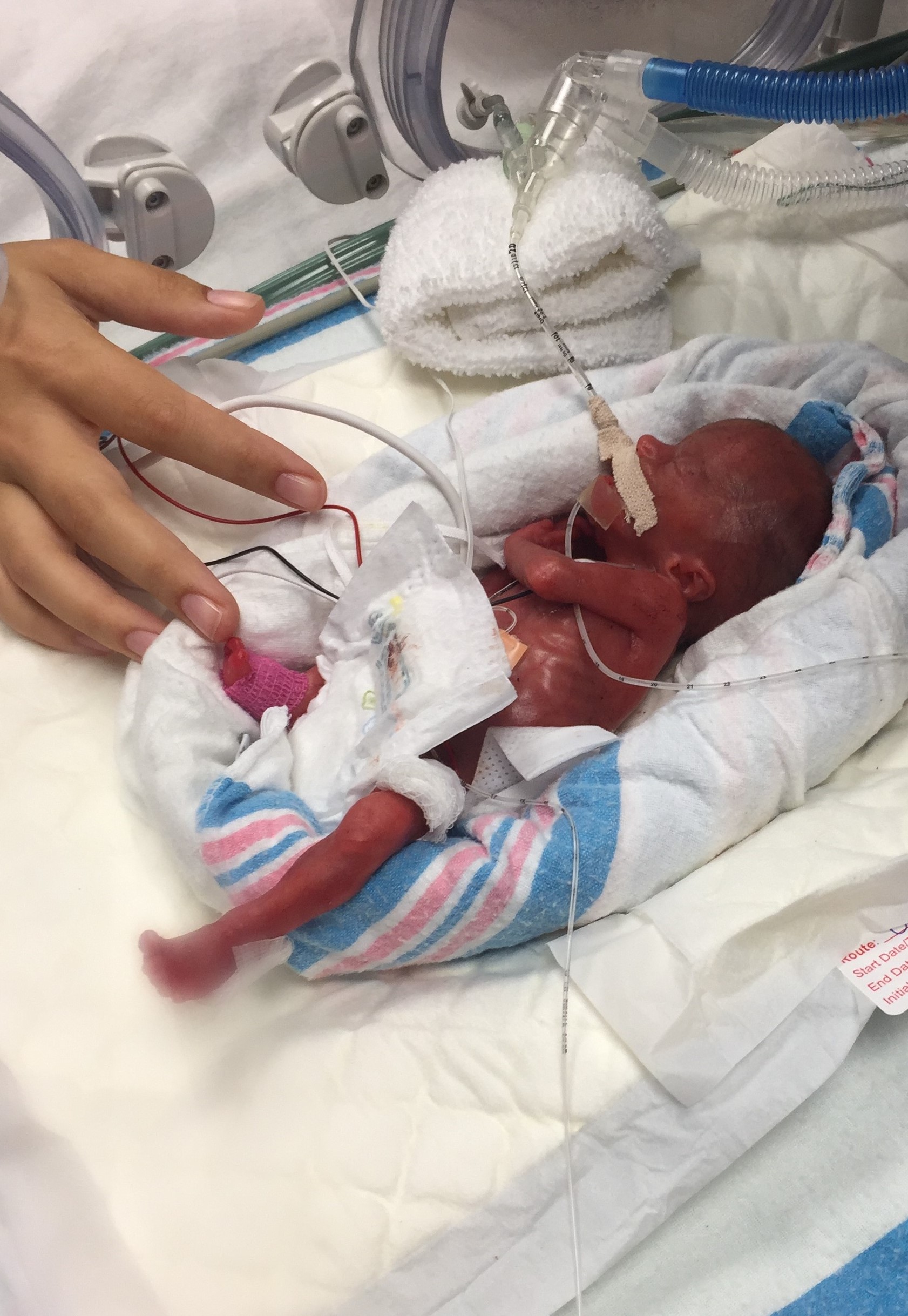 Photo courtesy of the Boswells
Josie after being delivered

Before Josie’s arrival, her parents, who live in Monroe, North Carolina, first had to make tough decisions.

Because of Sara’s preeclampsia and the placenta supplying blood to Josie was damaged, doctors told Sara and Whit they had two options: vaginal birth or a C-section. Doctors said a C-section carried more risks for Sara because of her preeclampsia. Her parents decided to have a natural birth.

While in the hospital, Sara and Whit, decided to read the book, “Hello Ninja,” she read to Josie throughout her pregnancy as a way of saying goodbye to their unborn daughter. Worried that their daughter would not survive, they began to prepare themselves for the loss.

But Josie chose that moment to announce her presence by kicking Sara. Sara and Whit decided to give Josie the best chance at living and scheduled the C-section.

Although those statistics were ringing in their ears throughout delivery, the dark clouds evaporated at the sounds of Josie’s first cries.

At 25 weeks, Josie was considered a micro-preemie. Most of her organs were underdeveloped and unable to function on their own. Josie went straight to the neonatal intensive care unit (NICU) at Hemby.

Because of her medical complications, the NICU became Josie’s home for the next seven months.

Josie had pulmonary hypertension, a type of high blood pressure that affects the arteries in the lungs and right side of the heart, and a heart murmur.

“Typically, babies born four months premature may have difficulty breathing on their own and may require some medical support,” said Dr. Emily Nazarian, a pediatric intensivist at Hemby who helped care for Josie. While ventilators keep the infants alive, “it’s just not a natural way of breathing. Over time, the lung disease can progress and doctors hope the lungs improve to where they can be weaned off the ventilator.”

But Josie hit a roadblock to development when she caught pneumonia and sepsis at three months. She wasn’t able to come off the ventilator and ultimately developed bronchopulmonary dysplasia (BPD), a chronic lung disease resulting from significantly premature lungs and lack of development.

“Josie had some of the worst BPD the team had ever seen,” said Dr. Eugene Daugherty, a pediatric intensivist at Hemby. “It was pretty remarkable for her to survive.”

In January 2018, Josie needed a tracheostomy, a procedure where surgeons make an incision in the neck to create a direct airway for a breathing tube. At 5 months old, Josie became completely vent dependent.

Becoming vent dependent also caused Josie to have a feeding tube directly into her intestines to make sure she got enough calories and to prevent further complications with her lungs.

After seven months in the NICU, team members felt Josie was stable enough to go home.

Back to the hospital

Josie had to return to Hemby after three weeks. This time at the pediatric intensive care unit (PICU).

“She improved initially enough to go home and be on the ventilator,” Daugherty said. “But then her team of doctors realized she wasn’t thriving or growing and couldn’t effectively breathe on her own.”

The PICU became Josie’s home for the next 10 months.

While intensivists tried to get her lungs functioning, cardiologists noticed Josie’s underdeveloped heart had a blood vessel that should have closed but remained open, which further complicated her lung disease.

“Once she came back to Hemby, everything slowly started to improve,” Nazarian said.

Through the wires and beeps of the heart monitors, everyone at the NICU and PICU still made every effort to make it feel like home for Josie.

“Hemby has made this ICU feel as much like home as an ICU can be,” Sara said. “I’d come in and I have no idea where the clothes, toys or books come from. Josie’s always dressed with pigtails or whatever else they can find, even when she has a bad night. They put a bow in her hair just so I know they love her and they’re taking care of her.”

“The doctors here at Hemby have just been phenomenal,” Whit said. “They’re good people and I mean they made it as easy for us as they possibly can. Because one thing about Josie is she’s not easy. She hasn’t been and she won’t be for a long time.”

After spending 17 months of her life in the NICU and PICU, Josie went home. This joyous step in Josie’s life was met with bittersweet emotions by anyone who came across Josie.

“She has touched every single person that walked into her room,” Nazarian said. “You’d always want to be in Josie’s room to see that smile. It’s a smile that goes from ear to ear.”

As for what’s next, Josie still has a long road ahead of her.

“She will need occupational, physical and speech therapy,” Daugherty said. “But our hope is that she grows, gets good nutrition, she gets taller, her lung units grow over the next couple of years and we can start to wean her off of the ventilator and feeding tube.”

Her home treatment consists of ventilator treatments every six hours, managing her feeding and watching her oxygen levels.

Although Josie’s journey will have bumps along the way, her doctors not only credit her will to live but her parents’ dedication to this next step in her life.

“Josie is a rare child with an extreme lung disease and the Boswells are a rare family,” Daugherty said. “Josie is alive today because she comes from an incredible family. Her strength, as well as her parents, is what really kept her going.”

Sara and Whit are confident Josie will continue to do what she does best—fight to live.

“She’s a fighter,” Sara said. “She has been through more in the last 18 months than anybody should ever have to go through. She’s just always smiling and she continues to fight. Her Hemby family has said multiple times that her will to live is the strongest they’ve ever seen.”

Today, if you asked, “Josie, how big are you?” you’d be met with Josie’s arms swinging open and a smile stretched across her face. While she wasn’t big in size just 18 months ago, there was something big in her that everyone saw—her fight and will to live.