How epilepsy surgery ended a teen’s long battle with seizures

Benjamin Keenan’s first seizure happened the day after Christmas when he was just 18 months old. It was the start of a journey that lasted longer than a decade, taking his family through thousands of seizures, hospitalizations and a diagnosis that left them wondering whether their young son would ever get a shot at a normal life.

The agony of never knowing when the next epileptic seizure would occur, and then having to endure the repetitive movements, abnormal body posturing, difficulty speaking and partial unresponsiveness wore on everyone. Some days, Benjamin would have dozens of seizures.

“It's very emotional to me,” said Andrea Keenan, Benjamin’s mother. “You're constantly, as a parent, asking yourself ‘Am I doing the right thing? Are you making the right decision? What is one more medication going to do to his body? What are the side effects? The long-term effects?’

Medicines would control seizures for a while, then gradually become less effective. Hospital stays occurred more frequently, wrapping the family in anxiety. Benjamin’s quality of life was suffering. Then, surgery by Novant Health pediatric neurosurgeon Dr. Erin Kiehna changed all that.

“We're very, very blessed and lucky,” said Keenan. “It has been an awesome experience.”

Benjamin’s first seizure at 18 months old landed him in an emergency room in Ohio, where the family lived. It was suggested to Andrea and her husband, Kevin, that Benjamin’s seizures were caused by viral encephalitis, an inflammation of the brain caused by a virus. He recovered and was OK until just before his 3rd birthday, when another seizure occurred.

The family, which had moved to North Carolina, landed at Novant Health Hemby Children’s Hospital in Charlotte. Testing revealed that Benjamin had epilepsy. Novant Health pediatric neurologist Dr. Shana Wallace began treating Benjamin, who took medications to control his seizures He also received a vagus nerve stimulator (VNS), which is implanted under your chest skin. The device prevents seizures by sending regular, mild pulses of electrical energy to the brain via your vagus nerve. VNS is sometimes called a "pacemaker for the brain." 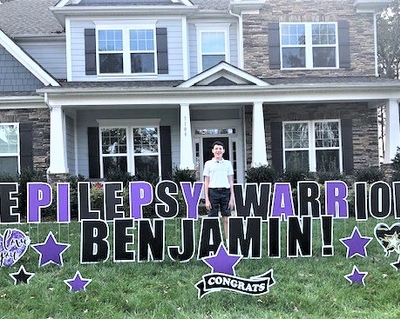 The VNS and medications worked for a time, but gradually Benjamin’s seizures increased.

“Seventy percent of people with seizures respond to the first medication,” Kiehna said. “But, those patients who don’t respond to one or two medications have only a 5% chance of responding to a third, these patients have drug resistant epilepsy.”

Eventually, Benjamin was up to four medications. His seizures were happening more frequently and he’d been hospitalized several times.

“We're really starting to promote surgery as an effective treatment for the right children with epilepsy,” Kiehna said. “If you have already failed your second drug, and you're on to your third, we need to figure out what else we have to offer. We know that you have better outcomes the earlier we get control of your seizures.”

Novant Health’s Dr. Christopher Beatty, a pediatric epileptologist, did additional testing and studied Benjamin’s case. His diagnosis was cortical dysplasia, which happens when developing brain cells don’t reach the parts of the brain they’re supposed to. You’re born with the condition, and as a result, some areas of the brain lack the electrical connections to function correctly.

It’s OK to get a second opinion, the Keenans were told. But, they knew that Kiehna, who had recently joined Novant Health, could surgically treat Benjamin’s issue. The Keenans found another potential surgical option in Pennsylvania, and weighed their choices. Andrea Keenan had a closer view than most parents in this situation, with her job as a Novant Health Dimensions application manager and former critical care nurse. 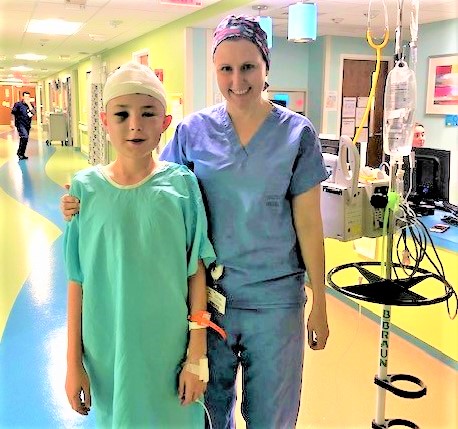 Benjamin and Dr. Kiehna during recovery

“My gut is telling me to stay home, do this at Novant Health,” she said. “You work here, you trust these people, the medical team knows your son.”

The decision for brain surgery on a child is always difficult for parents, including the Keenans. In the end, they put their trust in Kiehna, who in November 2019 surgically removed Benjamin’s damaged brain tissue that was causing his seizures.

Andrea Keenan knew her son was launching into recovery when relatives showed up at the hospital with pad thai, a flavorful stir-fried noodle dish. Benjamin, 12 at the time, scarfed it down. His scheduled 5-day hospital stay was reduced to 3.

Benjamin has since been cleared for all activities, and hasn’t had a seizure since the surgery. He is a 7th grader and is active in Boy Scouts, where his dad is a Scout leader.

“We've seen a significant improvement,” Andrea Keenan said. “Benjamin is very caring and compassionate. I'm hoping that he does something in the medical field. He doesn't want to see anyone hurting. He has a huge heart.” 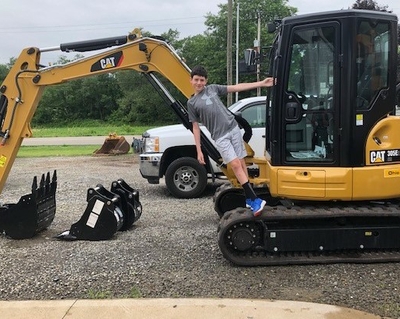 Six months after surgery, Benjamin (he’s since turned 13) weaned off his remaining two medications, which was a milestone for the Keenans. They celebrated by crushing empty medicine containers during a family trip to Ohio, where an uncle had access to a large tractor that did the trick. The family wanted to celebrate Benjamin’s 1-year mark following surgery with a trip to Walt Disney World last November, but COVID-19 restrictions changed that to a fishing trip at Hilton Head Island, South Carolina.

Kiehna, as always with young patients, was concerned about the scar that Benjamin would have on his skull. She asked Keenan about balding in her family, impressing the Keenans with empathy and sensitivity to think long-range about a scar on a 13-year-old with a full head of hair.

What does a pediatric neurosurgeon do?