`They saved our son’
By Cliff Mehrtens

Ellis Frey’s first three years were a battle against seizures that came without warning and sent him into uncontrollable laughter or rage. The cause was a lesion deep inside his young brain.

“Managing his care 24 hours a day was beginning to break myself down, and our family,” said Nicole Frey, Ellis’ mother. “His quality of life and the relationships within our family were suffering, and it just wasn't manageable anymore.”

The cure required surgery. A few years ago, that would have meant opening his skull. But in July, Novant Health pediatric neurosurgeon Dr. Erin Kiehna removed the lesion through a small incision in Ellis’ head (it took one stitch to close) via a form of laser surgery that is fairly rare.

Before surgery, Ellis suffered multiple seizures daily. In three weeks since surgery, he hasn’t had any, and energetically bounces around his Charlotte, North Carolina home.

“We'd never met the son we have now,” Nicole Frey said, wiping a tear. “They saved our son.”

Kyle Frey, Ellis’ father, said that before the operation, the family would see glimpses of their son’s personality.

“We knew there was a sweet boy in there,” he said. “Ellis was great 30 to 40% of the time, but seeing it progressively get worse and then to completely solve that issue was just unbelievable.”

Novant Health is one of the few medical centers in the U.S. equipped to perform the procedure that turned around Ellis’ life. Kiehna’s surgical skills, augmented by the precision of a robotic arm during the laser surgery, enabled her to pinpoint the lesion and guide the laser to within a millimeter of it. She avoided damage to nearby portions of Ellis’ brain that could have hampered his vision, hormone production and memory.

“The quality of life he will have now is just exponentially better than what he was living before,” Nicole Frey said. “He will have a normal life now, a normal childhood and school-aged career that he wouldn't have had before. So, we will forever be grateful.”

Ellis was six months old and sitting in his high chair for breakfast when Nicole Frey noticed he turned to the side “and completely zoned out.” Nothing seemed to break his gaze, which lasted about 10 seconds. Then it happened a couple more times. 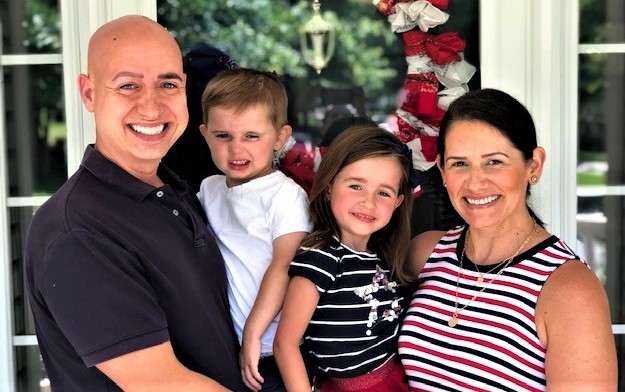 The Frey family (from left): Kyle, Ellis, Cora and Nicole.

An MRI exam revealed a hypothalamic hamartoma, a rare, benign tumor of the hypothalamus, a region deep in the brain that regulates many of the body’s systems. Gelastic epilepsy is often the result, which sent Ellis into inappropriate smiling, giggling, or laughter that wasn’t related to anything. He had eight to 10 seizures each day.

“It was hard not knowing what was going on inside his head during those seizures,” Kyle Frey said. “Was he in pain? Was he in discomfort? They would really wipe him out afterward too, which was hard to see.”

The Freys were referred to an Ohio clinic, which monitored Ellis (a year old at the time) for three days. The surgeon called. Sorry, the family was told. Ellis’ tumor is in too risky of a position, near his optic nerve. There’s nothing we can do for you.

Finding a road to a solution

The Freys were frustrated, but not deterred. They dove into research and gathered medical second opinions. Meanwhile, Ellis was taking anti-seizure medications, which worked for a while. But, his condition began worsening as he was growing. 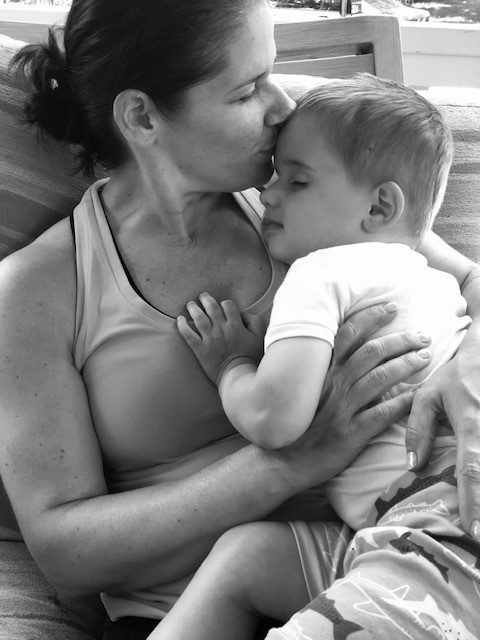 Not many places offer the intricate surgery Ellis needed, but the Freys found options in Texas and Arizona. Then, the COVID-19 pandemic hit. Air travel was risky. A cross-country car trip wouldn’t be great for an ailing child, either.

“It was a no-brainer,” Nicole Frey said. “We felt completely comfortable with her and letting her operate on our son.”

Surgery with a minimal invasion

A common surgical option for patients in Ellis’ situation is a craniotomy, which involves removing part of the skull to expose the brain.

“That surgery has a lot of risks that would have put a lot of pressure on his frontal lobes,” Kiehna said. “We would have been operating adjacent to his eye nerves. We could disrupt a hormone production of the brain. We could have injured memory structures. But, fortunately for Ellis, we have a more minimally-invasive option called MRI-guided laser interstitial thermal therapy.”

Ellis Frey was home one day after brain surgery.

Kiehna made a 2-millimeter incision on the top of Ellis’ head. She drilled a small hole, through which she passed a glass cathode that contained the laser.

“This was all guided by our robotics and our imaging navigation system,” Kiehna said. “That allows us to get accuracy to less than a millimeter.

“Technology is rapidly evolving in pediatric neurosurgery,” she said. “It's that evolving technology that allowed us to do Ellis’ surgery just shy of his third birthday. We used a new robotic arm so that we didn't have to put Ellis into a big, bulky headframe to do the surgery. We used our imaging navigation system, and all these things have made it possible to treat the absolute youngest children.”

Patients like Ellis now have a chance that they never had before. They avoid risky surgery and instead face real potential at a normal life.

Kiehn recruited world-renowned Dr. David Adelson, chief of pediatric neurosurgery at Phoenix Children’s Hospital, to assist in the surgery. He’s treated more than 70 of these cases, but Ellis was the youngest.

A hopeful return to normalcy 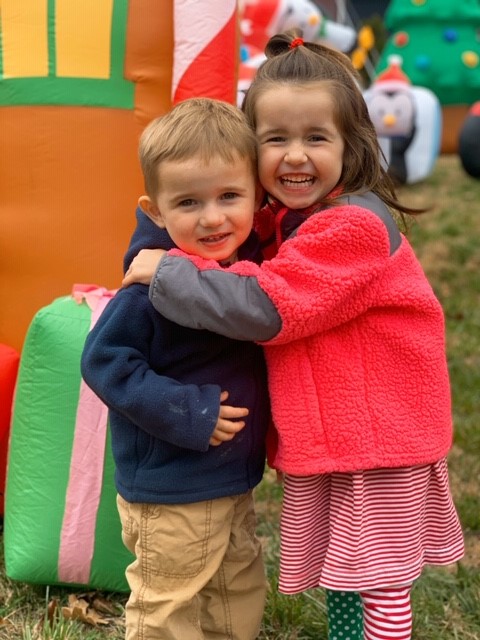 Ellis Frey (left) gets a hug from sister Cora.

Instead of a couple of weeks in the hospital after surgery, Ellis was home the next day. He didn’t have a large scar. His seizures ended. He celebrated his third birthday and is easing back into a little-boy routine. The Freys marvel at their chance of stability.

Ellis casually leans against the porch railing at home, waves to passing neighbors, and laughs and plays with sister Cora (she’s five) and pet dog Schatzie. Because of the seizures, Ellis has never been able to ride a bike or a scooter. That’s all about to change.

“Ellis is very outgoing and social,” Nicole Frey said. “He is a happy boy. He only wants to spread love.”

Medical team takes on a rare tumor with ‘heroic’ surgery