Her follow-up mammogram was key to surviving breast cancer

'I went in for that mammogram, and I knew right away that something was up’

Susan was no stranger to breast cancer. She’d lost a college friend to the disease back in the 1980s, and her mother had been diagnosed post-menopause. As a result, Susan had always been proactive. She had a baseline exam in her 30s, and when she turned 50, she began going back every year.

But the routine mammogram she got in July 2011 was different. Her exam turned up an area of concern, and Susan was called back for a diagnostic mammogram.

“I went in for that mammogram, and I just knew something was up,” Susan recalls. “There was something about the way the nurse rubbed my back. I just knew.”

A few days later, Susan got her diagnosis: She had breast cancer.

The cancer had been caught early. That was the good news.

But it wasn’t going to be an easy road. She knew she would need surgery. She knew she needed radiation. So, she made an appointment with a surgeon.

Then, she canceled it.

“I put it off, not because I was afraid but because I decided to do something for me that was outside the box,” Susan recalls. “I bought a BMW X5 and picked it up in Spartanburg, South Carolina, so I could take it out on the road course at the BMW facility there. It gave me an outlet to completely take my mind off everything for a couple of weeks.” 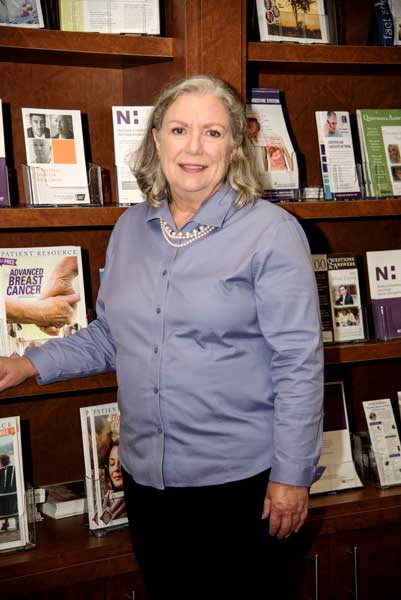 When she came back to reality, she rescheduled the meeting with her surgeon, who explained the plan of attack: Susan would undergo a lumpectomy, and during the procedure, the surgical team would remove at least one lymph node to make sure the cancer hadn’t spread. Five to six weeks after that, they would begin a series of 16 daily radiation treatments.

“It was just the unknown. Anytime you hear the word cancer, it’s like ‘Oh God.’ There are so many people who’ve been through so many types of cancer, and it’s not always the same. So, you don’t know where you’re going to fall in, whether it’s going to be something very simple or something that’s a lot worse,” Susan says.

When she came out of surgery, she learned she was going to be one of the lucky ones. Her margins were clean; her cancer hadn’t spread.

Susan isn’t married and doesn’t have children. At the time of her diagnosis, she was the primary caretaker for both her aging parents. Within six weeks of finishing radiation, her mother fell in her home, kicking off a slew of other responsibilities and putting Susan’s focus on someone else’s health, rather than her own.

So, without family to lean on, Susan turned to friends and fellow survivors for support.

A friend took her to the hospital to have the surgery. A fellow survivor in her investment club became a confidant. Another handful of friends in the medical profession were with her on days she needed a sounding board or extra help.

Now, she pays that forward, for the women she already knows and those she doesn’t. Before her final diagnostic mammogram at Novant Health Forsyth Medical Center, she sat in the waiting room across from a woman who was visibly distraught. The woman told Susan she had come in for a second mammogram, after an area of concern was spotted in her first, and she was scared to death.

“I had been there, too. I knew where she was in her head,” Susan recalls. “So, I turned to her, and I said, ‘I don’t know what the results are going to be, but you’re going to be in a very loving and comfortable place. And as scared as you are right now, you’re going to have a support system here like you wouldn’t believe.’”

When she completed her round of radiation, Susan began taking tamoxifen every day for the next five years. It was one small pill a day, but it was also a constant reminder of a time in her life she was eager to leave behind.

“I’ll never forget going to see the oncologist in October three years ago, five years after my diagnosis. He told me we could stop the tamoxifen, and tears welled up in my eyes,” Susan recalls. “To be told that you don’t have to take it anymore because you’ve come through the five years and everything is looking good, I felt like a weight had been taken off my shoulders. I felt, at that point, like I was through.”

Cancer made Susan take stock of her life, of where she had been and where she wanted to go. And she made a decision to only focus on the things that mattered most.

“It’s like tossing things out of your closet that don’t bring you joy. Now, I’m only going to do the things that I want to do when I want to do them and too bad if you don’t like it,” she says with a laugh.

So, she’s traveled, to India and Sicily, with more trips planned soon. She gardens, taking a particular and therapeutic pleasure in pulling weeds. And she joined the Women’s Council of Novant Health Forsyth Medical Center Foundation to help more women get access to life-saving mammograms.

“In my case, there was no lump. There was just a pinhead speck on the mammogram that indicated a tissue change,” Susan explains. “And yet so many women don’t get mammograms. That has got to change.”

Stories like Susan’s are our successes. Her diagnosis came early, and she’s now living life to the fullest, cancer-free. Help us create more stories like hers, by giving whatever you can to support our efforts to provide mammograms to under-served and uninsured women across our region.

Every contribution matters and every gift to our Think Pink Fund goes directly to a life-saving 3D mammogram to someone in or community. No more excuses. Just more mammograms.