Luther "Larry" Hicks’ hands shook so badly that small routines like holding a glass or brushing his teeth became frustrating.

“Eating out or even drinking water was just impossible,” said Hicks, 79, who lives in the mountain town of Old Fort, North Carolina. “I went through this for about 30 years. It gradually was getting worse.”

But, a breakthrough in brain surgery at Novant Health has changed Hicks’ life for the better. Novant Health is the only hospital system in the Southeast to treat essential and Parkinson’s tremors without making an incision. 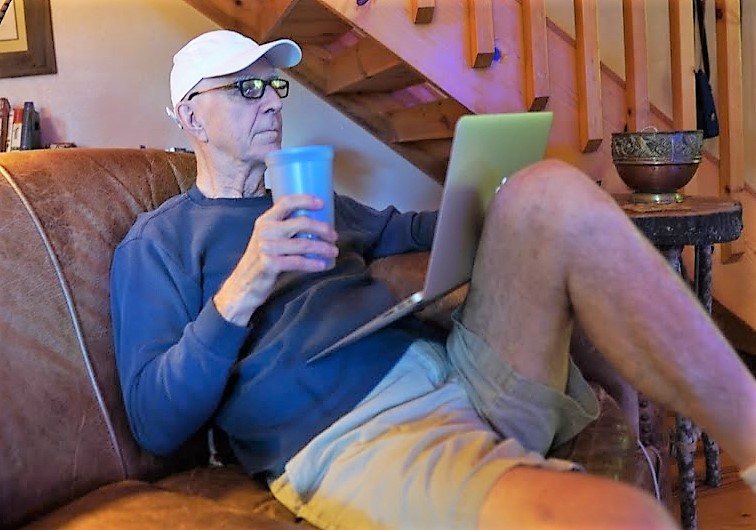 Larry Hicks regained use of his right hand after incisionless brain surgery.

Hicks, the first patient to undergo the procedure, arrived at Novant Health Mint Hill Medical Center at 7 a.m. on Sept. 28 and was home the same afternoon. His right hand was no longer shaking.

The new surgery – called MR-guided focused ultrasound – uses sound wave energy to eliminate brain tissue at the source of the tremor. No surgical incision or anesthesia is necessary, and many patients experience immediate and significant reduction in hand tremors.

Dr. Charles Munyon, Novant Health head of functional and restorative neurosurgery, combined two technologies in the procedure. Magnetic resonance imaging (MRI) pinpointed the exact location in the brain responsible for the tremor, and ultrasound precisely delivered more than 1,000 highly focused beams of acoustic energy to that location in Hicks’ brain without damaging any surrounding tissue.

"Our team is very excited to bring this technology to the region and to open up access to potentially life-changing treatment that until now has required long wait times and significant travel for patients in the Carolinas," Munyon said. "Many tremor patients have suffered for years or even decades with this debilitating and progressive condition and helping them regain the ability to dress and feed themselves, or just live a more active and independent lifestyle, is extremely rewarding."

Essential tremor is a neurological disorder that most often causes rhythmic shaking in the hands. It may also affect the head, voice, arms or legs. Essential tremor is not related to Parkinson's disease, and the two are often confused with each other. An estimated 7 million Americans have essestial tremor.

Parkinson's disease affects more than 1 million people in North America. In the United States, about 60,000 new cases are identified each year. Not every person with Parkinson's has tremors. The disease also commonly causes stiffness or slowness of movement. 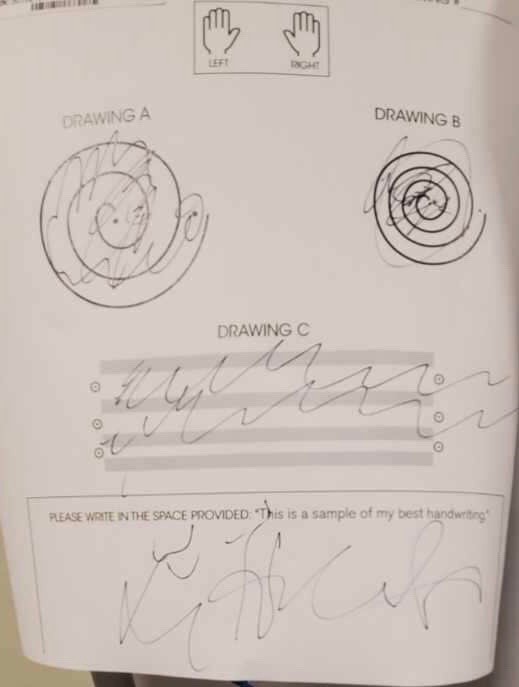 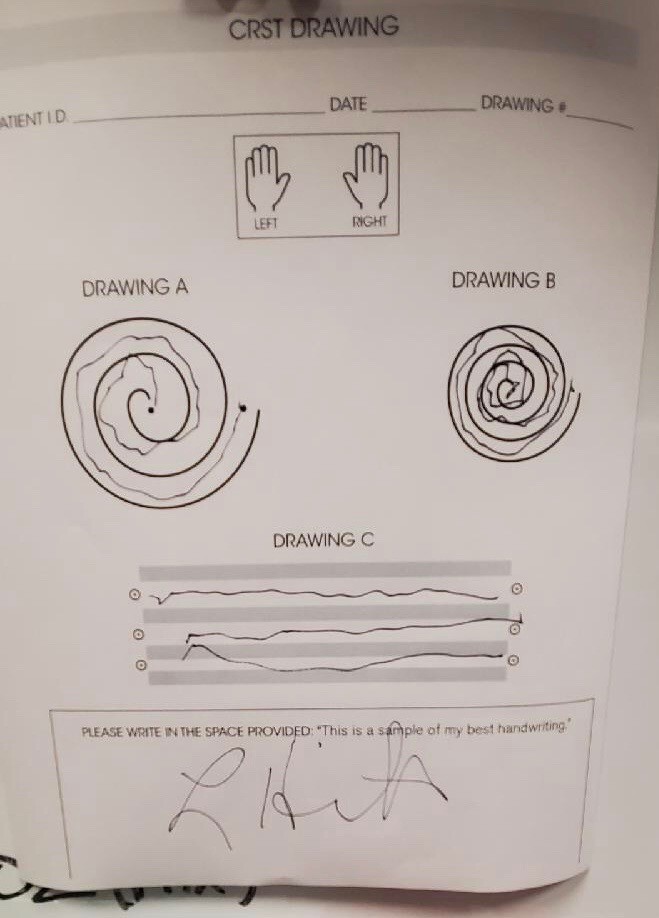 Hicks took a pre-surgery writing test that demonstrated his inability to legibly sign his name or trace within lines. During the procedure, and afterward, surgeons handed Hicks a pen to take the test again. His stayed within the lines and his `L Hicks’ signature was clear.

“Being able to do things now with my right side is just unbelievable,” Hicks said. “If people know this is possible, it'd be great for them to be able to go through this procedure. The past five years, I couldn't hide it anymore, so that kept me home. I didn't go out to eat much, didn't go to friends’ houses much. Even when I ate by myself, it would get so frustrating because I couldn't do things. I had to eat with two hands.” 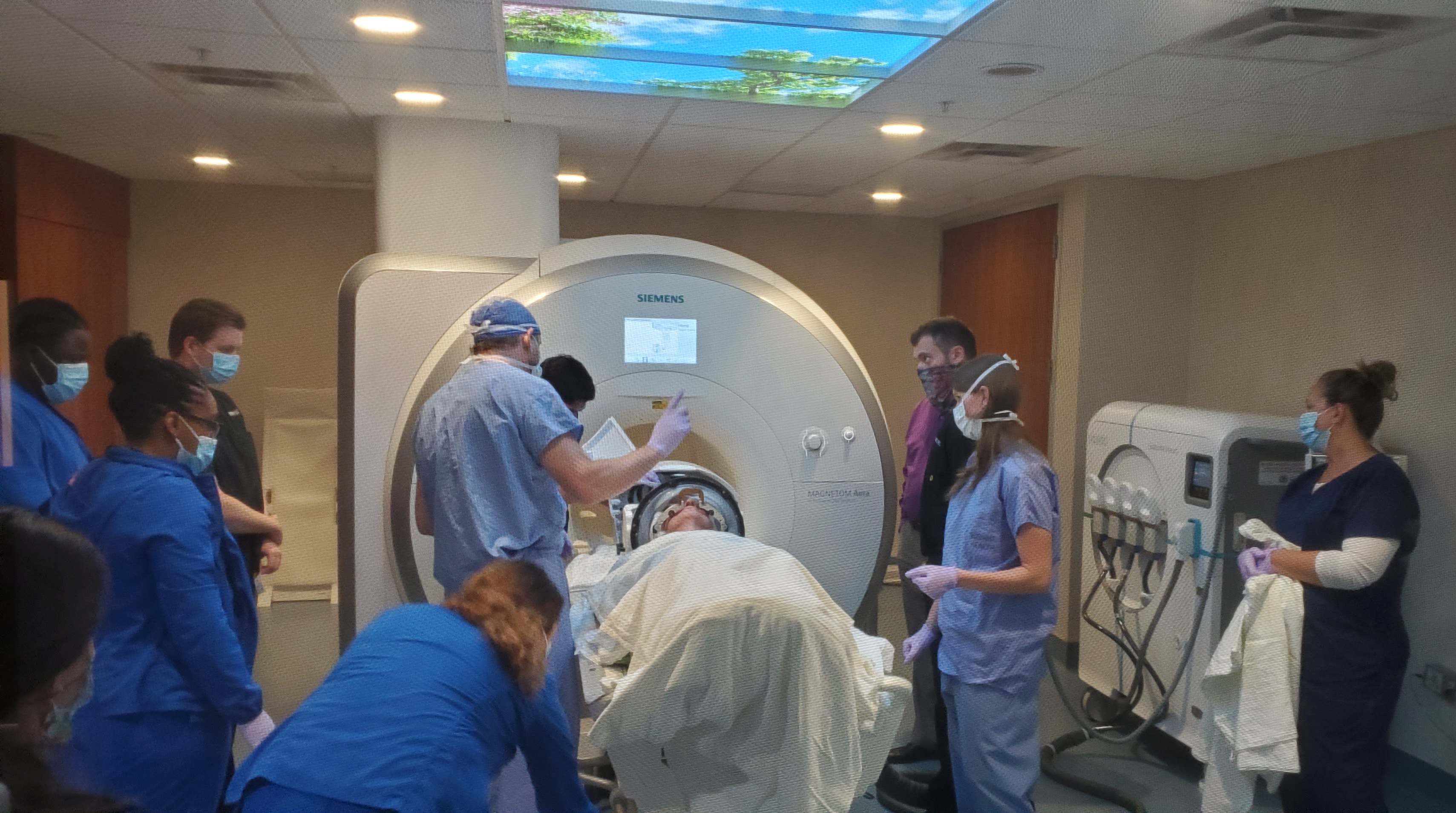 Larry Hicks was awake throughout his brain surgery by Dr. Charles Munyon.

Hicks said he’d tried medication for his symptoms and considered deep-brain surgery, but that would entail traveling to Virginia, where the wait list is also 18 months.

Novant Health’s incisionless procedure solved the tremors in Hicks’ right hand (he’s right-handed), and he said he’s considering a procedure to improve his left side, but is undecided so far.

Hicks’ recovery means he can now brush his teeth without `jabbing his gums out’,” or struggling with a screwdriver that made a simple task five times longer than normal. He’s eager to return to hiking and tackling chores around his mountain home.

Rob Hicks, Larry’s son, drove 120 miles to the surgery in Mint Hill. On the way home, they stopped for a soft drink at a drive-through and Rob tested his father by handing the drink to his right hand. No spills.

Rob said his father is an outgoing person who enjoys being around other people, but that slowly diminished over the years as his tremors became more debilitating.

“It had a really big impact in his life, to the point where Mom would have to butter his toast,” Rob Hicks said.

That changed dramatically soon after Hicks returned home. A new weed eater, still in the box, was on the porch.

“Next thing I knew, he had pretty much put it all together,” Rob Hicks said. “It’s a huge difference.”

Find a neurologist near you