After 40 years of suffering, no more tremors

'It was like I had my own set of cheerleaders that day.'
By Josh Jarman
George Barnes knew something was wrong when he squeezed the trigger on his service weapon. His right hand, which never betrayed him in Vietnam or in his previous job with homeland security, jerked causing his bullet to nearly miss the target on the shooting range. At the time, Barnes was 35, and new in his role as a U.S. postal police officer in Atlanta.

At first, the trained marksman tried to ignore the gradual onset of tremors in his hand. After all, his grandfather had “the shakes” and had told Barnes for years that it’s just part of life. Something you learn to live with. Barnes worked hard to combat the tremors. He wore a brace on his arm when shooting, and often relied on others to help him with writing and other assignments.

At restaurants, he learned to eat with his left hand, and his wife of 52 years would always grab his plate and cut his steak. It was embarrassing and continued to get worse. The breaking point came two years ago when Barnes went to his granddaughter’s school for a production.

“I saw a clipboard and knew I had to sign in,” he said. “I immediately started sweating and couldn’t even make a crooked line on the page.”

And then he got a phone call. Barnes’s nephew, Dr. Larry Martin, Jr., an orthopedic surgeon at Novant Health, told him about a new procedure that Dr. Charles Munyon, Novant Health’s head of functional and restorative neurosurgery, was doing to treat tremors.

Barnes, now 74, scheduled a virtual appointment the very next day, and he drove to Charlotte from Georgia last November to have the procedure. The results were instant: no more shakes. He couldn’t believe it, his wife couldn’t believe it. In one afternoon his life changed forever.

From coal mines to Vietnam 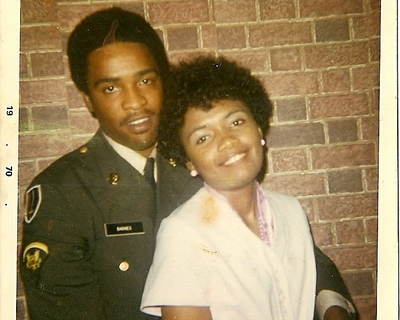 George and Roberta Barnes in 1970.

Barnes grew up in the small mountain town of Kimball, West Virginia. His father worked in the coal mine and his mother was a Pentecostal preacher. Roberta, his future wife, grew up across the train tracks 12 miles away. The couple met in high school, and Barnes kept a picture of her in his wallet when he was drafted at 18 to go to Vietnam.

“After serving my tour, I’ll never forget sitting on the plane on my way home in my dress uniform, shoes shined and medals on my chest,” he said. “Then a little girl pointed me out to her mother, and her mother said, ‘Don’t talk to him, those soldiers are crazy.’”

With the country divided, Barnes recalls that there were no parades for soldiers returning in 1969. He went on to marry Roberta and the couple moved to Atlanta where they were blessed with two children and two grandchildren.

The tremors started soon after. Over the years, he saw a few different doctors, but no treatment or medications seemed to help.

Martin, who is the chief of staff at Novant Health Mint Hill Medical Center, couldn’t wait to call his uncle when he learned that Novant Health, and his hospital in particular, was going to offer a new treatment for tremors.

“I remember Uncle George would never eat with us at family gatherings,” Martin said. “And when we would play cards, he always asked someone else to shuffle. But I didn’t find out until years later that he couldn’t even sign his name.”

Barnes was diagnosed with essential tremor, a common movement disorder that affects 10 million people in the United States. Munyon explained that the neurological circuit in his brain that normally helps to control fine-motor movement was misfiring, and that over time the condition could continue to get worse.

Novant Health partnered with INSIGHTEC, a medical technology company, to become the only hospital system in the Southeast to treat essential and Parkinson’s tremors without making an incision. And patients have been willing to travel. Since launching the program last September, Munyon shared that he has treated patients from as far away as Arizona, Nevada, Colorado and Florida.

The procedure – called MR-guided focused ultrasound – uses sound wave energy to eliminate brain tissue at the source of the tremor, effectively restoring function by interrupting the malfunctioning circuit. No surgical incision or anesthesia is necessary, and most patients notice an immediate and significant improvement.

When the procedure was over, Barnes was able to hold his hand steady and pick up a glass of water without spilling a drop.

"I was shocked. But what really stood out to me was looking at the faces of all the support staff. Everyone was beaming. They were so happy for me. It was like I had my own set of cheerleaders that day,"

Note: The new procedure is not a cure for tremors, but rather a minimally invasive approach to suppress them, and ultimately restore quality of life for patients.

Martin concluded: “I think Novant Health does a great job of always putting patients first. This procedure is truly life-changing, and outside of my uncle, I’ve started referring some of my own patients.”

While Barnes is thankful to have his life back, he actually credits the tremors for strengthening his marriage. They caused him to rely on his wife for better or worse – love personified over the last 40 years. Barnes told Roberta that their first order of business – post surgery – was to go eat at a restaurant, and he wanted to sign the bill.

“It’s the small things that you take for granted,” he said. “I won’t take them for granted anymore.”

How ‘artificial intelligence’ is changing health care for patients

Brain damage or back to normal? Seconds count in stroke care.