A young boy, his mother and 9 years of care at Hemby

Everything between 2012 and 2016 is sort of a blur for Stephanie Pitman.

“Those years were overwhelming,” she said. “Looking back, I see it as a haze. People have asked me how I did it – how I still do it – and I tell them there’s no other option. You do what you have to do for your child.”

It started in January 2012 when Stephanie was placed on bedrest for two weeks before her son, Gabe, was born at Novant Health Presbyterian Medical Center at just 24 weeks and 2 days. He weighed 1 pound, 14 ounces and spent his first six months in the NICU at Novant Health Hemby Children’s Hospital, which is part of “Presby.” He had his first (of 14) surgeries when he was 6 days old. 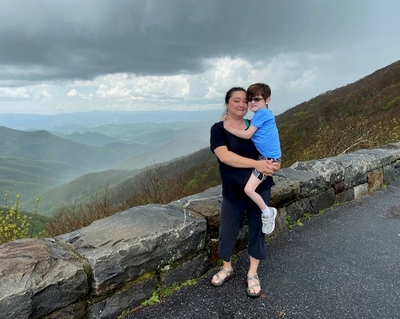 Stephanie Pitman and her son, Gabe.

Today, Gabe is 9. He and his mom are on a nearly decadelong journey that’s been filled with emergencies, surgeries and lengthy hospital stays. But there has also been joy, loads of love and a never-ending embrace from his care team at Hemby.

Cerebral palsy, a seizure disorder, visual impairment and cognitive issues are among Gabe’s health conditions. He can’t walk independently but can use a walker. He’s usually hospitalized once or twice each year due to his multiple health issues.

Gabe had part of his intestines removed, resulting in short bowel syndrome – which can lead to a host of other issues. Among them – an inability to tolerate solid food. Gabe can eat pureed food, but he gets most of his nutrition – and all his medicine – through a feeding tube.

Gabe was a month old before his mom could hold him. He was so tiny and fragile; his skin was so thin. It felt surreal, Stephanie said.

Before they left the NICU, Gabe was approved for daytime, in-home, RN-level nursing care, which Stephanie described as “a saving grace.” Having help allowed her to return to her job at a credit union – something that became essential when her husband left six months after Gabe was born.

But Gabe does have a loving, doting dad and extended family. Stephanie married Brandon Pitman in 2016 – that was the end of the four-year fog – and he legally adopted Gabe in August 2020. Stephanie’s sister and her parents have been active in Gabe’s care his whole life. They all know how to feed him and change and clean his feeding tube. 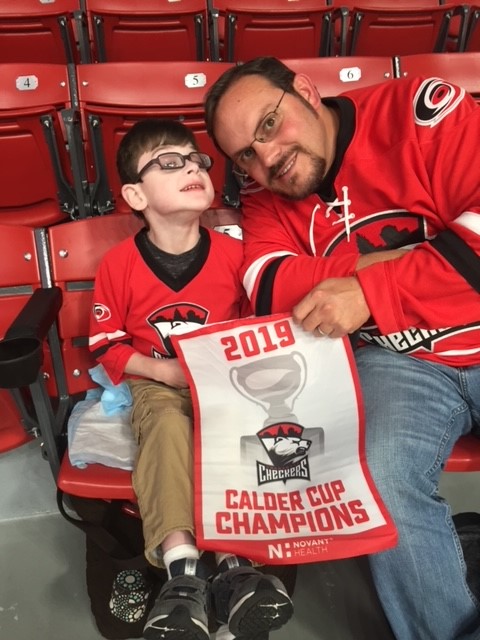 Gabe with his dad, Brandon Pitman.

A village and then some

And the staff thinks of the Pitmans like family. Nathena Opara, the first nurse Gabe ever had, calls him “a miracle baby.”

Stephanie said, “Hemby Children’s Hospital has all the specialists Gabe needs.” (Hemby offers 16 subspecialties.) “He spends a great deal of time with Gastroenterology. I know I can call or message Gastro any time and they’ll get back to me.”

Having a children’s emergency department is another plus for the Pitmans. Hemby has the only children’s ER in Charlotte staffed 24/7 by board-certified emergency physicians.

The family drives to Hemby even though they live two-and-half hours away in Bakersville, nestled in the mountains of western North Carolina. There are closer hospitals, but they like coming to a place where they’re known. Dr. Daniel Bambini, a pediatric surgeon, has operated on Gabe every time he’s needed surgery.

“The staff has always been very optimistic,” Stephanie said. “And they're very direct with us, which we appreciate. They never talk above your head, and they listen to us. When we have concerns, they don't brush us off.”

“Some of the nurses have known Gabe since he was not even a year old,” she added. “The first nurse we ever had is still there. They remember him.” (Turnover in nursing is generally high, but not at Hemby.)

That would be Opara. “He was maybe 4 or 5 months old when I first took care of him,” she said. “I can picture him in his crib with his mom looking over him like she still does today – with those same loving eyes and same caring hands and the most nurturing, soothing voice telling Gabe everything is going to be OK.”

“What really linked me to Gabe was seeing how Stephanie is with him,” she continued. “It's a mother thing. It's a love thing. When I first started working at Hemby, I (suddenly) became a single mother of four. I saw similarities between us. She didn't know my story, but I was thinking: ‘You’re going to be OK. We’re going to be OK.’”

Pitman said the staff’s “familiarity with Gabe’s conditions makes a huge difference. I don’t have to recount his medical history time and time again.”

Two years ago, Stephanie left her job to become a stay-at-home mom. She decided she needed to devote herself to Gabe’s care full-time.

But the term “stay-at-home” doesn’t quite fit. “Gabe loves adventures,” she said. “He likes to go for drives, go for walks, to be out and about. He is not a homebody, which makes things interesting.”

Gabe has opinions, and he’ll readily express them. He can say, “I love you.” He loves music – almost all genres. Contemporary Christian, old hymns, bluegrass. He likes Bon Jovi and Journey. He’s seen Journey in concert.

But, he cannot abide Disney songs.

He’s fascinated by tractors. The Pitmans have one, and Brandon will take his son along when he’s doing yard work.

Gabe’s in fourth grade, and either his mom or his home nurse goes to school with him. He doesn’t like math, but he loves the playground and reading. After school, it’s time for therapy – and there are many therapists involved in Gabe’s care – a physical therapist, occupational therapist, a speech therapist and feeding therapist. He also gets to go to equine therapy and adores horses. 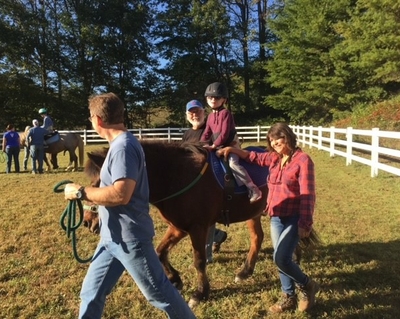 “His vocabulary, in the last few years, has really improved,” Stephanie said. “It used to be that he could answer ‘yes’ or ‘no’ when you asked him a question. But he’s become more conversational.”

He can verbalize his fears. Hospitals once caused Gabe a lot of stress, his mom said: “Anytime we went to a doctor's office, he’d say, ‘No doctor, no doctor. They're gonna hurt me.’”

But on his most recent hospital visit – a three-week stay – Stephanie noticed a difference. “He has really matured,” she said. “We’ve always tried to explain things to him to help him not be so scared. I think he comprehended that more. The nurses would come in to give him his medicine, and Gabe would say, ‘She doesn’t want to hurt me.’ I said, ‘Yes, they want to help you feel better so you can go home.’”

Gabe’s dad is a pastor at Beaver Creek Baptist Church as well as a college professor at Western Piedmont Community College, where he serves as horticulture program coordinator. He preached over Facebook Live during the pandemic. Gabe would watch on the computer, and he started asking questions about the sermons. “He's very, very inquisitive,” his mom said.

Opara has seen Brandon with his wife and son. “He has adopted Stephanie’s style of caring for Gabe,” she said. “When he's in the room alone with Gabe, I can hear the same type of parenting going on. It’s very consistent, very loving, very nurturing. Stephanie and Gabe were blessed when Brandon came into their lives.”

Stephanie feels blessed that Hemby has been a second home to their family since Gabe’s birth. There’s a lasting bond among the Pitmans and everyone involved in their care.

“On our last visit (in mid-June), we got to the elevators,” Stephanie said. “Gabe walked out of the pediatric unit on his own with his little walker, and I just started crying. I do that every time we leave the hospital. I get emotional. We're just so grateful for the care they give us.” 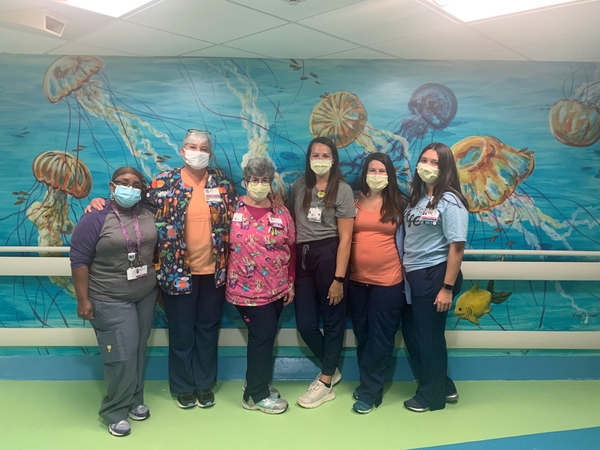 What are pediatricians checking for? A lot more than you think.

This mom went through everything to save her baby