This mom went through everything to save her baby

Parvovirus, preeclampsia and two lifesaving blood transfusions are no match for a mother’s love
By Josh Jarman

At 27 weeks, expectant mother Taylor Bullins had just one request as they wheeled her into the operating room at Novant Health Forsyth Medical Center: “Above all else, save my baby.”

Dr. Jon Rosnes, medical director of maternal-fetal medicine, did just that by performing two lifesaving blood transfusions for the baby, while also caring for Bullins who was diagnosed with parvovirus and preeclampsia.

A few days later, with a room full of emergency medical personnel on hand, Bullins delivered her 2 pound, 8 ounce baby girl into the world. Tiny Norah Bullins gasped for air and then turned blue. The real fight for survival had just begun.

‘I’ve got what it takes’

Bullins is a strong and independent single mother from Kernersville, North Carolina. At 25, she attributes her inner strength and fortitude to her parents, who taught her to rely on her faith and to love her way through trials.

Love and faith were both needed when Bullins found out that she was expecting. “At first I didn’t believe it,” she said. “So I took two more tests and they confirmed it. I cried, told my parents, then reminded myself that, this baby is a blessing and I’ve got what it takes to be a mom.”

Bullins' relationship with her own mother Tracie grew stronger at each prenatal appointment. “It was amazing to hear my baby’s heartbeat for the very first time,” she said. “And to share that moment with my mother, made it even more special.”

‘We just wanted to see her face’

On Nov 5, Bullins had a follow-up sonogram at Novant Health WomanCare in Winston-Salem where they determined that there was fluid in the baby’s belly, and referred her to the new obstetric emergency department (OB-ED) at Forsyth Medical Center.

Bullins was immediately evaluated by Rosnes who determined that the baby was severely anemic and diagnosed her with hydrops fetalis, a serious condition in which abnormal amounts of fluid collect in two or more areas of the body. If left untreated, it would be fatal to the baby.

Maternal blood testing subsequently determined that the baby was infected with parvovirus, more commonly known as fifth disease. About half of pregnant women are immune to parvovirus B19, but in rare cases, it can cause mild illness in the mother and severe anemia, or lack of adequate oxygen blood flow to the baby.

Two days later, Bullins was admitted to the hospital at 26 weeks.

“I was in denial at first,” she said. “We left the house that morning just wanting to see baby’s face on an ultrasound. Then I found out that my life and my child’s life were both at risk.” 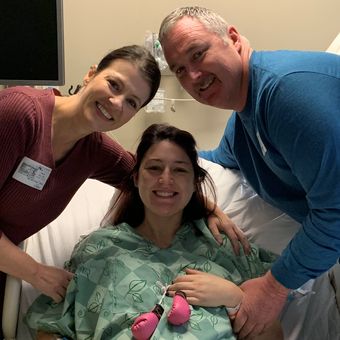 Taylor with her parents Tracie and Randy Bullins

Rosnes recommended an in-utero blood transfusion to save her baby’s life. He explained that he would insert a hand-guided needle into the umbilical cord to perform the procedure. The goal: replace baby’s blood with healthy adult blood to correct the anemia and improve the baby’s blood oxygen level.

But there were also risks to be considered. The baby’s health was already fragile and a transfusion carried a serious risk.

“They did a really good job of preparing us for what to expect should something go wrong,” said Bullins. “But I was ready to do whatever it took.”

The transfusion happened Nov. 8, on Bullins’ birthday. “For safety reasons, I had to remain awake for the procedure,” she said. “And I remember there were about 15 people in the operating room, all waiting at a moment’s notice to jump into action should something go wrong.”

About halfway through, Bullins asked to remove the curtain so she could see her baby on the monitor. “It was wild and nerve-wracking to see your child, not moving on the screen, as a needle is placed inside your body.”

The blood transfusion successfully increased her baby’s oxygen (hemoglobin) level. Victory was short lived however, when a few days later a subsequent sonogram revealed a second transfusion was needed.

Not out of the woods

As the days progressed, Bullins noticed increased swelling in her feet and legs. Her blood pressure was rising and she had bouts of nausea. The culprit: high blood pressure during pregnancy called preeclampsia.

If left untreated, preeclampsia can cause serious risks in mother and the baby. Ultimately, the treatment of preeclampsia is delivery of the infant.

And so, at 27 weeks and 6 days, as a third transfusion was being prepared, Bullins’ condition worsened and a cesarean section was performed by Dr. Samantha Sinclair to deliver Norah Jayne Bullins on Nov. 19.

Tracie, always at her daughter’s side, said, “We were delighted to hear Norah cry out, but I had to turn away when she started to turn blue.”

A team of neonatal intensive care unit (NICU) nurses and doctors sprang into action and whisked off the 2-pounds, 8-ounce, Norah to the NICU. The 56-bed unit specializes in caring for preemies and cares for some 1,100 premature babies every year.

“We were prepared for Norah to give up,” said Bullins. “But she defied so many odds, she is my little warrior.”

‘I can’t wait to stay up all night’ 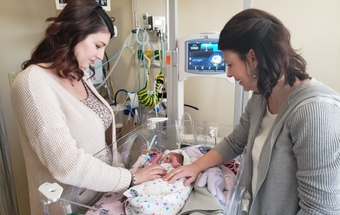 Taylor and her mother Tracie Bullins visit baby Norah in the NICU.

For Bullins, the hardest part was going home without her baby.

“You can’t imagine how hard it is to go to the grocery store, and see the other new moms with their babies while yours is still in the hospital,” she said. “Norah spent Thanksgiving and Christmas in the NICU.”

Each day Norah grows stronger. At last check, she was up to 2 pounds, 15 ounces and her care team expects her to graduate from the NICU and go home within a few weeks.

“I can’t say enough about the care she has received in the NICU,” said Bullins. “Somedays I just went in there and cried, and the nurses were always there to hold me.”

Tracie added, “What impressed me the most is the tenure of the staff. We haven’t met a nurse yet with less than 10 years of experience. I don’t worry about Norah here. It is amazing that strangers have so much compassion and empathy.”

When asked what she is looking forward to most, Bullins said, “I can’t wait to stay up all night with my baby. I want to experience a sleepless night in the rocking chair. I want to give her a bath and just take her home. I’m grateful that I’ll get to do that soon.” 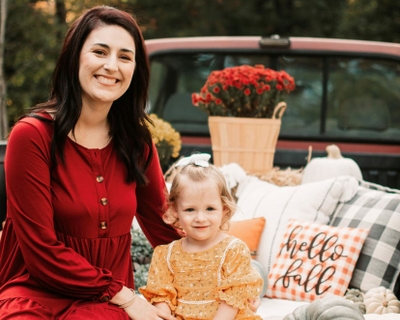 We recently caught up with Bullins to see how things are going at home. She shared that Norah is still facing some health challenges, but that her baby girl has grown to 30-pounds and is 31-inches long. She’s also developed quite a personality and has taken an interest in animals.

“I’ll admit that some days are harder than others,” she said. “I think when you have a NICU baby, you develop another level of worry and appreciation for life.”

On Nov. 19, Norah will turn two – a feat Bullins still considers to be a miracle. And while the birthday party theme is yet to be determined, Bullins said that she, like Norah, has grown a lot over the last few years.

“I’m not sure exactly when it happens, but at some point, I think having a child causes you to find a new and better version of yourself,” she said. “I’ve also learned that you need to surround yourself with a good support system, and that it’s ok to ask for help when you need it.”

My triplets didn’t read my birth plan: Lessons from an ob-gyn mom

Expectant mothers now have their own emergency department