Super “Dad” at home and in the ICU

Jason Cooke opens up about being a dad, his wife’s breast cancer journey, and caring for COVID-19 patients at the hospital.
By Josh Jarman

In March 2020, Jason Cooke was still getting his bearings in his new role as director of critical care at Novant Health Presbyterian Medical Center. Even in the best of times it’s a demanding position that oversees more than 400 team members who care for patients in the most complex corners of the hospital: the intensive care units.

But when COVID-19 descended, it turned into a blizzard of 18-hour days as he and other leaders went into overdrive around staffing, contingency planning and converting various parts of the hospital for coronavirus care. And as the year dragged on, new challenges would emerge. There was a new baby at home, and his wife would be diagnosed with breast cancer at 37.

The only place he found solace was in his car. Thanks to stay-at-home orders, there was hardly any traffic on the road and somehow he was always able to flip the switch from hospital director to husband and dad before he pulled in the driveway.

Taking the hinges off

The Charlotte native always knew that he wanted to go into medicine. At an early age he became fascinated with taking things apart and putting them back together.

“While growing up I often got in trouble for taking doors out of their frames and for completely disassembling our television,” he joked. “I wanted to learn how things work and that transferred over to medicine.”

In high school he volunteered at nursing homes and hospitals, and he had his sights set on becoming a doctor. He later went to North Carolina State University where he studied biological sciences, became captain of the varsity swim team, and for fun, earned his paramedic license through the local community college.

“Becoming a paramedic definitely opened my eyes to the often tragic parts of health care,” he said. “I was eager to see more, do more, and to find new ways to help others.”

After being waitlisted from a few different medical schools, Cooke did some soul searching and for the first time in his life, seriously considered nursing.

“I became a swim coach after college, and always liked being able to help people overcome their fear,” he said. “Nurses do the same thing for their patients.”

He went on to earn his nursing degree from Queens University in Charlotte, and landed his first job as a bedside nurse at Novant Health Huntersville Medical Center in 2011. Over the years he’s worked his way up the ladder, earned a master’s degree from Ohio University, and was promoted to his current position at Presbyterian Medical Center six months before the pandemic hit. 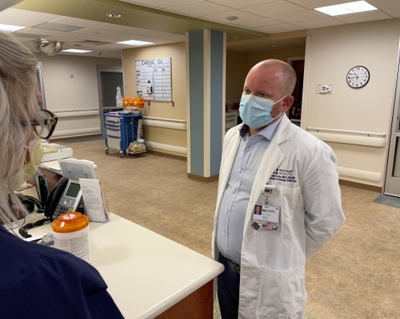 For Cooke, the COVID-19 pandemic changed everything. In the beginning, he was consumed with trying to sort through the logistics of staffing, personal protective equipment (PPE), and repurposing hospital units in case of a surge. And with so many unknowns, anxiety was at an all-time high for many team members who worried about caring for others, their own safety and worries about infecting their own families.

“Jason is a calming force,” said Kelli Sadler, vice president of nursing and market chief nursing officer for the greater Charlotte market. “Not only is he passionate about his work in caring for patients, but throughout the pandemic he became someone the other nursing directors leaned on for support.”

Cooke put it this way: “We seized the moment. But it was emotionally draining. People often think about those who lost their jobs during COVID-19, but don’t realize how many hospital team members were displaced from their normal roles. I tried my best to keep them all working and to provide them with encouragement along the way.”

On the homefront, things were also full steam ahead as Cooke and his wife, Sarah, were up to their necks in diapers, trying to learn how to take care of a newborn and their 4-year-old son during a pandemic. Just a few months before everything shut down, the couple were delighted to welcome their daughter, Clover, into the world in December 2019. After facing infertility issues with their firstborn, Bodhi, and then again this time around, the proud parents decided to name their daughter after the “lucky” four-leaf clover.

In late September 2020, Sarah noticed a lump on her left breast while breastfeeding. At first, the 37-year-old mother thought it was just a clogged duct, but an ultrasound and biopsy confirmed it was breast cancer.

“My mind raced from shock to denial,” she said. “I couldn’t imagine leaving Jason on his own with the kids.”

For treatment, Chaudhary recommended four months of chemotherapy to shrink the tumor, followed by surgery. Although the cancer had not spread to the other breast, Sarah had a double mastectomy to reduce any possible future risk.

“The hardest part was not having the strength to be the wife and mother that I wanted to be,” she said. “I can’t credit Jason enough for stepping up to handle breakfast and dinner responsibilities, bedtime routines and for driving me to and from all of my chemotherapy appointments.”

When Sarah’s hair started to fall out, the whole family gathered in the bathroom. Then Cooke picked up his razor and tried to explain to his 4-year-old son how the medicine that was causing his mother to lose her hair, was actually working to help her feel better. Then Bodhi did something unexpected, he laughed, which caused everyone else to laugh.

“He thought shaving mommy’s head was the funniest thing in the world,” said Sarah. “Which really lightened the mood for all of us. It was only afterward that he told me I could put my hair back on.”

“At her age and with two small children at home, the last thing that should have been on her mind is the possibility of breast cancer,” said Turk. “But I applaud her for paying attention to her body and getting checked out when something didn’t feel right. That decision helped save her life.”

Better than a superhero 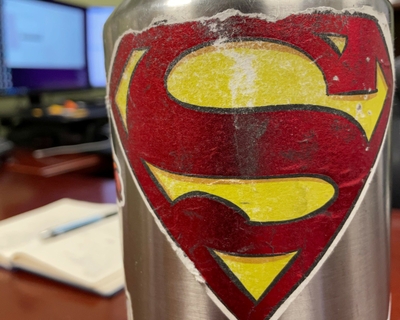 Bodhi Cooke thinks his dad is Superman, and he gave him a sticker to prove it.

Throughout the course of Sarah’s treatment, Cooke continued to go to work. For him, donning PPE and entering the COVID-19 unit was actually therapeutic.

“I’ve seen a lot of tough things over the years,” he said. “But nothing affected me as much as my wife’s cancer. When tragedy hits close to home, it really makes you think about what’s important in life.”

In his own way, son Bodhi came to the same conclusion a few months ago when he placed a Superman sticker on his father’s water bottle. When asked about it, a lump formed in Cooke’s throat and his eyes filled with tears.

“He’s 100% our Superman,” said Sarah. “I don’t know if there’s a superhero that’s stronger or better than Superman, but if there is, it would be Jason. Throughout it all, he was our rock and he held us together.”

Going to work and making a meaningful impact in people’s lives will always be important for Cooke. But this season of life has also taught him just how vital his role is at home.

“My kids need a dad,” he said. “At different points in my life I’ve neglected that responsibility, but my wife’s diagnosis was a wake-up call. We don’t fight over the little things anymore. Instead, we’re focused on putting each other first and taking nothing for granted. I hope that’s something that my kids will be able see in their dad.”

My dad was a doctor. So am I. Here’s what he taught me.

She lost her dad at 14. It ignited a passion for hope.