One mom's triumph over postpartum depression

Sarah Chang had recently delivered her second baby, and life was good. She and her husband, Dan, had two healthy children – a boy and a girl – and she was preparing to return to work as a registered dietitian three months after having Everett, now 2.

Then she began having trouble sleeping, was feeling nauseated and having panic attacks. “I’d start to see an image from a scary movie I’d seen, maybe, 15 years ago,” she said. “It was debilitating.”

Chang who lives near Charlotte, was getting her kids ready for bed the first time a panic attack hit. “I couldn’t breathe,” she said. “I was pacing. I tried to lie down but couldn’t. My lips were quivering, my hands were shaking. I was sweating. You feel like you’re dying or going crazy.”

She called her father, a physician, who told her to breathe into a paper bag during an attack. He assured her: “What you feel is real; the trigger is not real. You’re safe.”

The attacks came on four or five more times. Her husband wasn’t sure how to offer comfort. With his wife’s permission, he told his boss and colleagues about what they were dealing with and explained he’d need to leave work if his wife suddenly needed him. To their surprise, everyone was supportive.

“Once you say it out loud, it helps,” Chang said.

She finally went to see her physician. The diagnosis: postpartum anxiety and depression. She’d been skeptical of that as she researched her own condition because she hadn’t experienced those with her first child, Annabelle, now 4.

Dr. Mark Bland, with Novant Health Rankin OB/GYN, said postpartum anxiety or depression can happen after any pregnancy. “If you had postpartum mood disorder with your first baby, it’s more likely you’ll have it again. But the converse isn’t true. If you’re a mom with a 2- or 3-year-old and a newborn, you have more to juggle than you did the first time. There’s no blueprint for this.”

Stuck in a ‘black hole’

In the U.S., one in nine women will experience symptoms of postpartum depression, according to the government. Postpartum mood disorder’s symptoms present like many forms of depression – sleep disturbance, lack of energy, difficulty concentrating, lack of joy. Every new mom probably feels a couple of these, Bland said. But if she feels all of them and with increasing intensity, she should seek help.

Chang, 35, was leery of going on medication – something Bland understands. “Most patients who’ve never engaged with a psychiatrist are reluctant,” he said. “But this is a complex problem and one that impacts the entire family. It requires treatment.”

Chang tried talk therapy, also known as psychotherapy, instead, which helped. But it wasn’t enough. “I wanted to push through,” she said. “I spent eight months trying to dig myself out of a dark hole. Ultimately, though, I waved the white flag and agreed to medication and psychiatrist.”

She went to see a psychiatrist at Novant Health Psychiatric Assoicates in Charlotte. The psychiatrist began the medication management aspect of the Perinatal Anxiety and Depression Program at Novant Health, developed by Christine Roberts-Elliott, a licensed clinical social worker.

Mothers can face other mental health challenges. The postpartum blues – different from postpartum mood disorder – are common. “Take any of us and deprive us of sleep for two weeks, six weeks, 12 weeks, and we’ll all be ragged, edgy, maybe tearful,” Bland said. “Our thoughts spin. This is the life of a new mom for the first week or so she’s home with her baby. But if it drags on and Mom begins to talk of ‘a hole she can’t come out of,’ that’s when we need to talk about treatment.”

Bland said obstetricians today are talking about the concept of a “fourth trimester.” Yes, the baby’s been born, but the mom still needs the same level of medical attention she got in the weeks leading up to delivery.

“We used to tell new moms to see their OBs six weeks after delivery,” he said. "That’s a long time when you’re talking about sleepless nights and exhaustion. Checking in with your provider or nurse two weeks postpartum is a better mark.”

Novant Health OBs offer a screening tool to new moms. If they score high, the provider may refer them to the perinatal mood disorder program. The next step is a therapist’s assessment, which determines if talk therapy or psychiatry is recommended. There’s also a support group component for new moms who want the comfort of sharing with others going through the same thing.

And Bland reassures his patients going through postpartum mood disorder: “This is just a season. It’s not the rest of your life.” 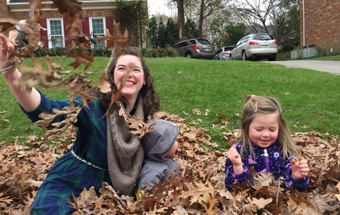 Talk therapy works well for some patients. Chang said talking with a professional about her fears helped immensely. But she needed more. “It was important for me to see a psychiatrist,” she said. “It’s not an easy or immediate task to find the right medication.”

Which medicine to prescribe is dependent on each individual’s chemistry, according to a Novant Health psychiatrist. The treatment of choice is the class of drugs known as selective serotonin reuptake inhibitors (SSRIs), which help the patient have more circulating serotonin, a chemical that plays a role in regulating mood. Zoloft is the safest drug for pregnant and postpartum women, the psychologist said. But not every woman responds positively to it. Prozac is generally the next go-to drug.

Chang’s path back to health involved more than finding the right medication. She meditates, journals, has an active prayer life and does yoga. Still, she felt she needed a lifestyle change. She decided to leave her job and focus on family. She’s writing a book about her experience and how she got through it.

“I have this big, beautiful community of support now,” she said. “Once I told people I was going through a hard time, they began offering their unconditional support. And, I enjoy my kids now; I soak them in.”

When is it more than the 'baby blues?'