Prep and rehab are key parts of recovery
By Cliff Mehrtens

He’d whack golf balls once or twice a week with a buddy. He picked up the sport more than 50 years earlier. Yardwork - with the smell of fresh-cut grass - was another favored pasttime. But Thomas' aching knee protested during both.

He wondered when knee replacement would become the best option, and discussed it during treatment with Dr. David Homesley of Novant Health Barron, Homesley & Valentine Orthopedic Specialists.

That definitive point for Thomas came in February. “It was a challenge to walk,” he said. “I couldn’t do the things I wanted to do.”

More than 600,000 knee replacements are performed each year in the United States, according to the National Institutes of Health. With an aging population, experts believe demand for joint replacement will only continue to grow.

Homesley enhanced the process by using Mako surgical system software to create a personalized pre-operative plan for Thomas. During surgery, the robotic-arm-assisted technology helps the surgeon stay within the planned boundaries when removing bone and cartilage. The surgeon guides the robotic arm. 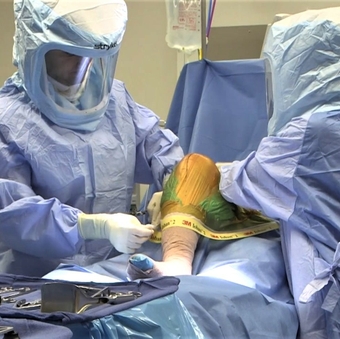 Later that same day, Thomas was up on his feet and testing his upgrade by standing and walking down the hospital hall.

Thomas quickly launched into rehabilitation at home. During a March 1 visit from physical therapist Paul Ashby, Thomas did toe lifts while standing and leg lifts while his hands were atop the kitchen island.

The duo went outside, where Thomas (using a cane) walked around the gentle slopes in his driveway and street. Back inside, he laid face-up on his bed for quadriceps tightening and straight-leg lifts.

“How you feeling? Breathe, in through the nose, out through the mouth,” Ashby said, during a strenuous part of the workout.

“I’m breathing every way I can,” Thomas said, laughing.

“The key to becoming more active and mobile after knee replacement is staying on top of the pain from the beginning, having a positive attitude, and doing the recommended physical therapy of focusing on motion,” Homesley said.

Thomas stayed dedicated to rehab. He’d been through a shoulder reconstruction surgery a few years back, so he understood the importance of remaining diligent.

By mid-April, Thomas said he was cleared by Homesley to “do what you want to do.”

Today, he said. “I’m doing fine. I have mostly good days and some bad days. When I get sore, I have to quit. The problem is, I don’t like to stop.”

Thomas said he only takes over-the-counter pain medication, works with a physical therapist once a week, and exercises daily. He’ll do 15-minute walks around the neighborhood. He can drive a car again. He putters around in his workshop.

Thomas has also been to the golf course for a light dose of chipping and putting. As his leg strengthens, he’ll soon be able to hit full speed off a tee.

And with spring weather engulfing his yard and garden, he’s not too far from being a fixture there.

Thomas’ recovery is much quicker than most knee replacement surgery patients a decade or so ago.

“We are medically optimizing the patients more diligently now making sure that the patient is as healthy as can be before the surgery, because this reduces the risks of the surgery and allows a quicker recovery for the patient,” Homesley said. 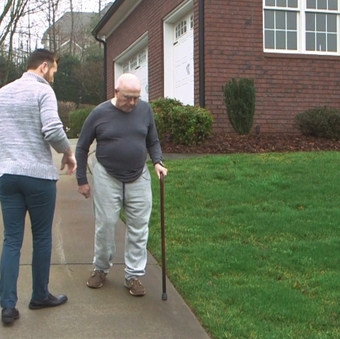 Darrell Thomas (right) walked his neighborhood streets as part of his rehabilitation from knee replacement surgery.

Doctors also are using multiple methods for postoperative pain, e.g., spinal anesthesia, nerve blocks, medications before, during, and after the surgery that aren’t narcotic medications. The result often is quicker mobilization and a speedier recovery.

“Of course, everyone’s situation is different,” Thomas said. “But I would tell anyone that if your knee hurts, you’ve got to do something about it. The sooner you get the process started, the sooner you’ll heal.”

Thomas said a key to his recovery was the cohesion he felt with Homesley and the medical team. “They sat down with me and listened,” he said. “They explained the medications and answered all my questions. When I had a question (while at home), they were very responsive.”

Said Homesley: “Knee replacement surgery is a big endeavor for the patient and it is very important for the patient to have confidence in the entire orthopedic team. The more the patient understands what is going to happen before, during and after the surgery, the better the patient will do.”

How a new knee gave a hiker back her life