I tried acupuncture – and it was nothing like I expected

Fear of needles affects up to 10 percent of people and I’m one of them. So, I too was surprised when I agreed to an acupuncture session (in the name of research, of course).

"The needles are thinner than the width of a human hair," I thought. "I can do this." 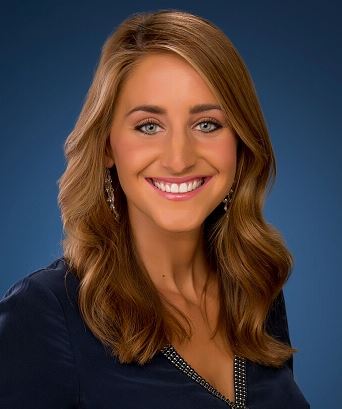 A few weeks before, I heard a friend raving about its many benefits. I always thought acupuncture was just for pain relief. Boy, was I wrong.

Fascinated, I took a deep dive in search of answers. And my Novant Health team members* were happy to help.

‘It helps balance things out’

The tradition of acupuncture, which involves inserting thin needles at very specific points, stems from the idea that energy flows within the human body and can be channeled to create balance and promote health.

Acupuncture is just one component of traditional Chinese medicine, which holds that the body can help heal itself, and responds better to conventional health care, when it's balanced.

“We all know that past traumas or sources of anxiety, things of that nature, reside in our mind. But Chinese medicine practitioners say those emotions live in every cell of the body and also impact physical health,” said oncologist Dr. Rachel Baldwin at Novant Health Cancer Institute - Kimel Park (Integrative Medicine) in Winston-Salem.

“When those hidden or pushed-away emotions are released in a safe fashion, all of the cells in the body function that much better," she said. "Whether that release happens through acupuncture, therapy, journaling or bodywork, people are better off for it."

Acupuncture can help with myriad of health issues, Baldwin said, such as:

Experiencing the many benefits of acupuncture can take time, doctors say. "Most people will need at least four to six sessions to experience a noticeable difference," Baldwin said.

A bit nervous, I started with one at Novant Health Sherry Strong Integrative Medicine Oncology Clinic, located in the Agnes B. and Edward I. Weisiger Cancer Institute in Charlotte. I was greeted by a cheerful woman at the front desk. Her smile eased any nervousness I had, as did the soothing voice of Amanda Nolff.

Nolff, a licensed acupuncturist, completed upwards of 2,000 training hours before working at Novant Health. She explained how acupuncture can be used to channel energy within the body to help people feel more balanced both physically and emotionally.

"Placement and depth of needles is manipulated on a per-person basis to promote optimal health and healing," Nolff explained. 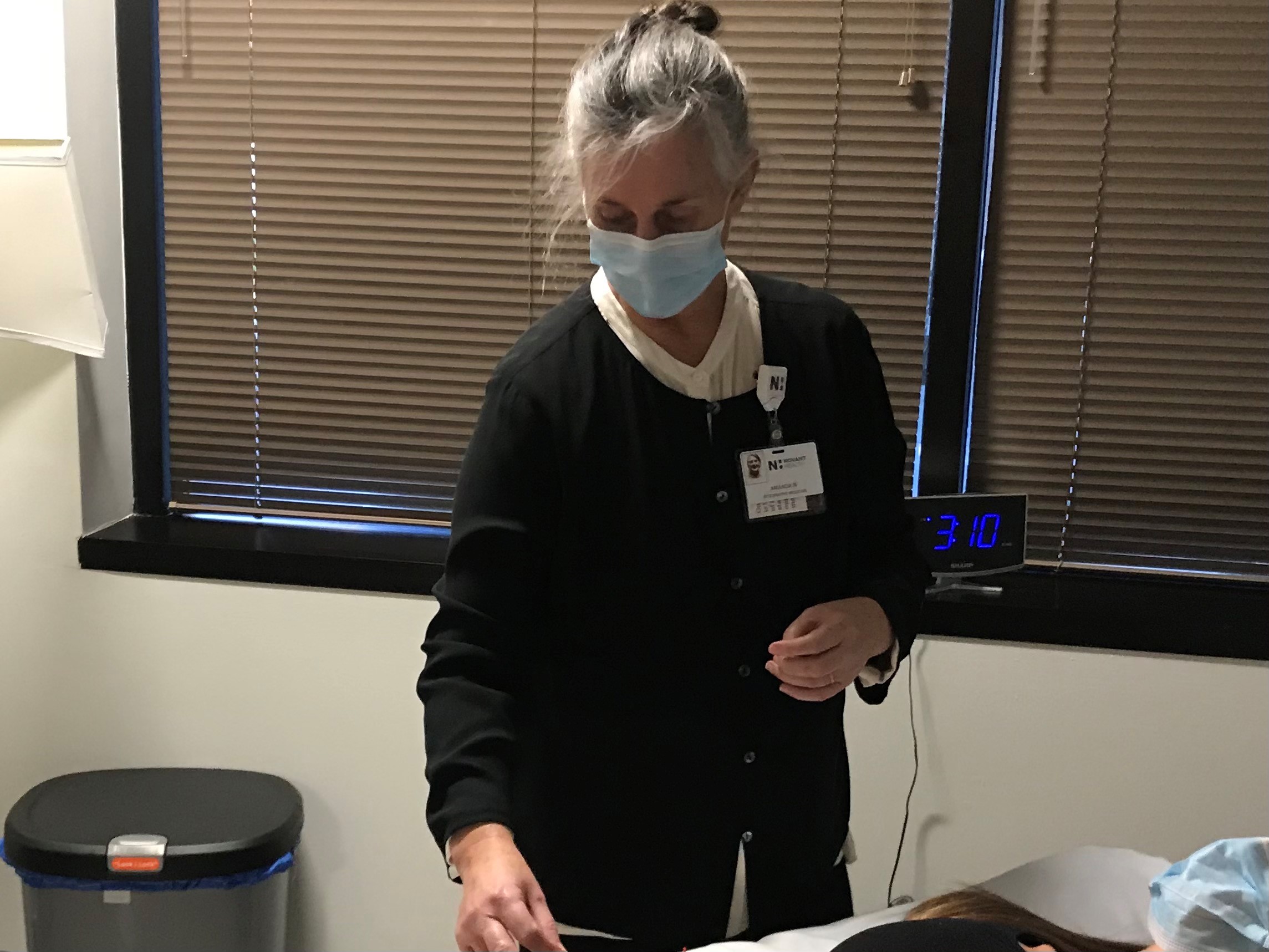 The room reminded me of seeing a massage therapist. The lighting was soft and soothing music played quietly in the background.

Nolff and I talked through my health history and interest in acupuncture. Then, I laid down on a heated table with crisp, white sheets.

“Well, no turning back now,” a tiny voice whispered in my head.

She began by taking the pulse on both of my wrists – something Nolff did just by holding them – and made a few remarks about my body temperature and allergies.

Find an acupuncture location that's convenient for you.

"Not bad," I thought

She carefully placed the single-use stainless steel needles in different areas of my body, feeling my pulse every so often. It only took a few minutes to insert them into my scalp, ear, arm and lower legs.
"Not bad," I thought. It only felt like a tiny prick, similar to an insect bite. Maybe momentary discomfort, but nothing like getting “stuck” with a needle.
Nolff left the room and said she'd be back in about 30 minutes. "The needles need time to do their job," she said. Mid workday, I relished in the relaxation.
When Nolff returned (sooner than I would have liked), I asked about needle placement. "How do you decide where they go?" I wondered aloud.
The goal is to balance the body’s yin and yang, she explained, referring to the idea that opposite forces are interconnected and can be complementary to one another.

“At its most basic, each person possesses a unique balance of the energies of yin and yang. We walk a wiggly path between the two,” Nolff said. “When they are of equal size, pressed together in balance, we are most likely to be healthy. When one gets a little too big, or a little too small, that's often when we see problems expressed through different organ systems in the body.”

Writing this now, I can confidently say acupuncture is something I would continue. There is nothing to fear, I learned that day. My other takeaways include: 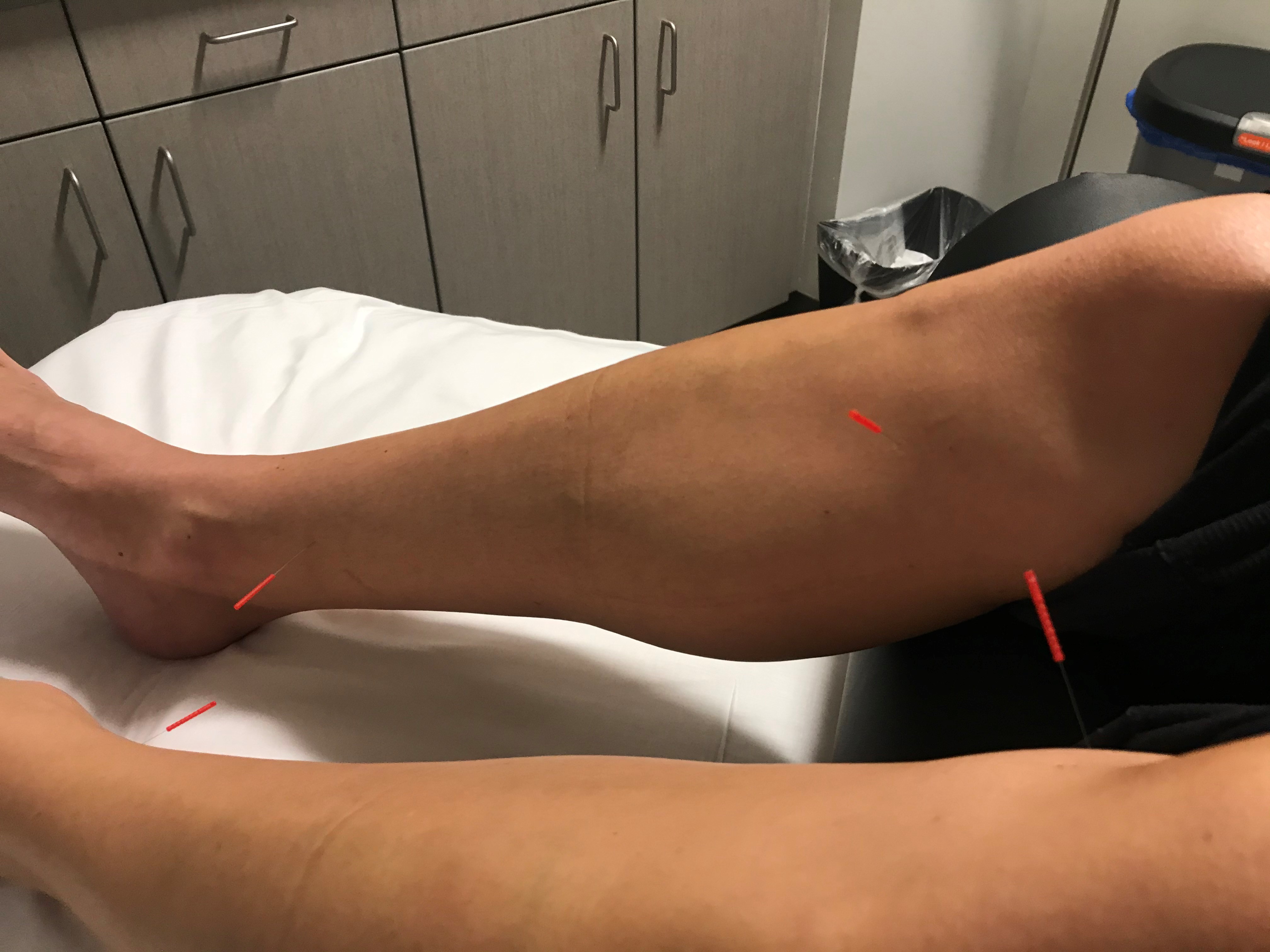 Acupuncture needles are thinner than a human hair.

While acupuncture is not usually covered by insurance, many people use their flexible spending dollars to help pay for it. Group or community acupuncture, where multiple people are in the same room receiving treatment, is effective and more affordable.

"Sometimes, those group sessions cut the price of a treatment by more than half," Baldwin said.

Since acupuncture is known to ease pain and nausea, physicians often refer their cancer patients who are undergoing treatment.

There is a concept in traditional Chinese medicine that acupuncture can “open the gates” for people receiving chemotherapy, Baldwin said, meaning the medicine can get to places that it ordinarily might not be able to.

“The theory is that acupuncture allows chemotherapy to travel where it can do the most good. While at the same time, helping to reduce the incidence of side effects," she said.

Research is ongoing, but Baldwin said people seem to experience fewer and less severe side effects from cancer treatment when they have acupuncture compared to those who do not. Many of those patients are referred for acupuncture, but the treatment is available to other Novant Health patients, as well.

Your do's and don’ts guide to 2023 allergy season

Do you need probiotics? It depends.

Do at-home remedies for UTIs work?

Which natural remedies to take — and avoid — for colds, flu and COVID-19