How one nurse found her stride in the military

There’s not much that a day at Novant Health Forsyth Medical Center in Winston-Salem can dish out that Jessica Neely isn’t prepared for.

The nurse manager for the hemodialysis unit served for eight years as a combat medic in the Army National Guard. During her time in the National Guard, Neely would be called on one weekend a month to a VA hospital in North Carolina where she would perform medical screenings for military pilots or physicals for low-income members of the community.

She also could have been called on in the aftermath of a natural disaster to provide medical care to those in need.

“Although I'm in North Carolina, I’m still in the U.S. military,” she said. “So, if Uncle Sam says I need you to go to Louisiana, for instance, I’m going to Louisiana.”

As America prepares to celebrate Veterans Day on Nov. 11, Novant Health salutes the service of hundreds of team members like Neely and affirms the hard-earned gifts they bring to patients and fellow team members.

‘Blood from a turnip’

Neely initially did nine weeks of basic training at Fort Leonard Wood in Missouri and then another nine weeks at Fort Sam Houston in Texas to become a medical specialist in the National Guard.

If she had to, she could get an IV started on a battlefield, provide wound care in a war zone, basic field medicine and provide support to communities after a natural disaster.

Beyond her military training, she trained to do a job that scares a lot of people. She was a phlebotomist before becoming a nurse.

“I can get blood from a turnip,” she said.

In her current role, she still gets called on to draw blood. “With patients on dialysis, we don’t always have a varying selection of veins to choose from,” she said. “But I can always find one. If a teammate has a difficult stick, they’ll say, ‘Hey, Jessica – can you please come and help me?’ I'm always ecstatic. I have the best of both worlds because I still can draw blood, and I get to be a nurse.”

And she’s a natural leader – something the military demonstrated to her. “I didn’t realize I was (a leader) until I went into the military,” she said. “Ever since, I’ve always been in leadership roles. During my time in the military, I've been a squad leader and platoon leader.”

Being a nurse is what Neely always dreamed of.

“In early childhood, I had tubes in my ears, and it caused decay in my inner ear,” she said. “I was referred to a pediatric ENT (ear/nose/throat doctor) at Chapel Hill. And while I was in the hospital, during fourth grade, I realized I wanted to be a nurse. They took excellent care of me. Just seeing how things operate in the hospital, I was so intrigued.”

There was nothing that was going to stand in her way of becoming a nurse. 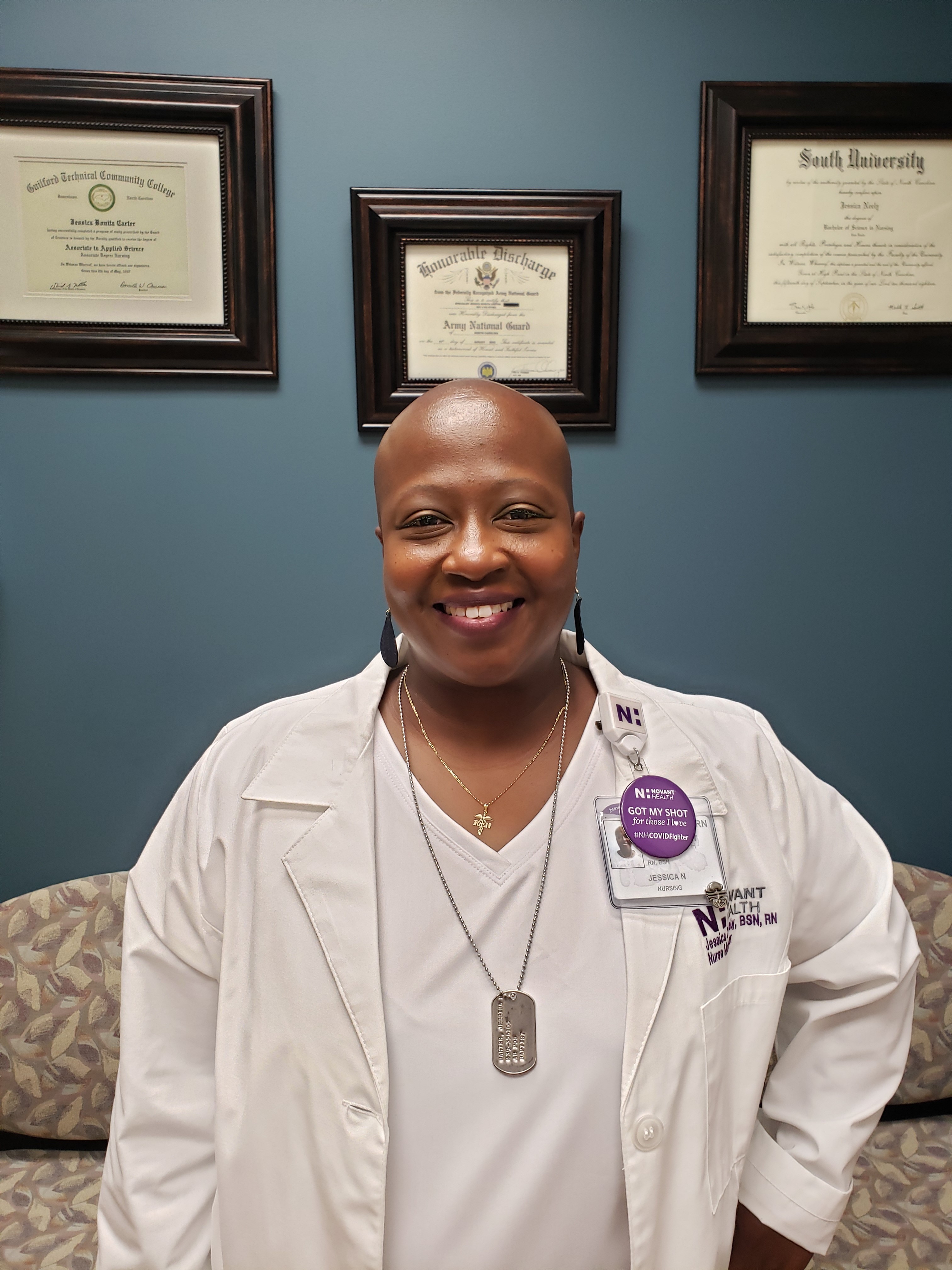 “My parents did not have the money to put me through school,” she said. “And I didn't want to put that stress on them. I knew I didn’t want to go straight to college after high school because I did not want to conform to those things that freshmen typically do – partying and not really studying.”

Instead of going straight to college, she served in the military – and the military, in turn, paid for her associate’s degree in nursing, which she earned in 2007. Her dad, a former Marine, was thrilled she wanted to serve. “The military provided the education I needed to get to where I am today,” she said.

She didn’t stop with her associate’s degree. She earned her bachelor's degree in nursing in 2019 (the same year her daughter, now in college, graduated from high school – they were both honor students) and expects to earn a master’s degree in nursing leadership in 2022.

The military provided her “with the discipline, as well as all the core values that the military possesses,” she said. “The one that sticks out to me the most is integrity. I do what's right, no matter who's watching, or even if no one is watching, and that has brought me a long way. The military also taught me respect, which has propelled me into the position I'm in now.”

The military teaches you to be cool in the midst of chaos or a crisis, Neely said. It’s a skill she leans on today if she has to. “I try to de-escalate situations … I'm able to calm an upset patient down by letting them know: Hey, this is what we're going to do. We're here to provide care for you. And in order to continue to do so, this is what needs to happen.” And then she makes it happen.

The PA will see you now. Or maybe the NP.

I was an ICU nurse a year out of school. Then came COVID.

When new nurses hit the floor, she’s there to help