More than 1,000 Novant Health team members served in the military
By Ken Garfield

Vennie Patterson serves her community as a team member of Novant Health, applying the lessons she learned while serving her country in the U.S. Army. How to lead. How to take direction. How to be an asset whatever the mission.

Her story illustrates the crucial role that veterans play at Novant Health: More than 1,000 team members served in the military, covering all five branches of the armed forces. On Veterans Day, we honor their sacrifice and affirm the hard-earned gifts they bring to patients and fellow team members.

“The U.S. Army was the greatest team for me to be on,” said Patterson, who helps run health clinics through community engagement, which focuses on health equity and upward mobility in the communities it serves. “Novant Health allows me to use every skill in my rucksack.”

A Charlotte native who grew up in the Garden Park community off Beatties Ford Road, Patterson comes by her military and health care experience honestly. Her father, Isaiah, served in South Korea. Her mother, Sarah, was a nurse at Novant Health Presbyterian Medical Center, though she always dreamed of joining the military. “I did one of her bucket list items,” Patterson said.

Patterson, 60, enlisted after seeing a TV commercial for the Army, drawn by both patriotism and practicality. The financial support she received from the Army helped further her college education. She earned a degree from University of North Carolina at Chapel Hill. The medical lab skills she acquired helped open the door to a career at Novant Health. “I love my Uncle Sam,” she said, her smile brightening this interview via Zoom.

But the meaning of her military career – in the U.S. Army from 1983-86 and U.S. Army Reserves from 1986-97 – goes deeper than great benefits. She says her proudest moment came when she finished basic training at Fort Jackson in Columbia, South Carolina, 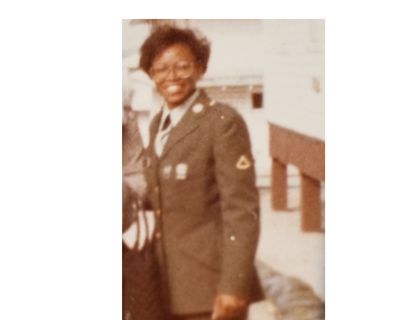 appreciating what it means to push herself beyond what she thought were her limits. A 400-meter runner at West Charlotte High School, she qualified for the same event at the U.S. Army Pre-Olympic Track and Field Trials – another moment of pride.

“The military challenges you to cross those lines to where you usually would not go,” she said.

During Operation Desert Storm in 1990-91, she worked as a third-shift lab technician at the United States Military Academy, West Point Hospital, in upstate New York. During that time her son, Phillip, lived with her sister, Annie, in Charlotte. Patterson watched him get on the bus for his first day of school – on a video. But her heartache was eased by the support of her peers – invitations to holiday dinners, help with navigating the New York City subway, daily “How ya doings?” from peers and superiors.

Her voice cracks as she talks of being part of something bigger than yourself. That’s what she found at Novant Health.

She joined the team in 2012 as a medical lab technician at Novant Health Lakeside Family Physicians in Huntersville, North Carolina. In January 2017, she assumed her current role – the one she considers a calling – as a community engagement coordinator. Patterson organizes cardiovascular and other screenings in Charlotte, many in at-risk neighborhoods.

During the pandemic, screenings have expanded to include COVID-19 testing. Patterson and her colleagues are also handing out masks and referring those in need to Loaves & Fishes food pantry and Crisis Assistance Ministry. At the heart of this outreach is connecting with the community. There’s Patterson in the middle of it all, comparing military experiences with visitors and encouraging people to be vigilant about their health. She calls it relationship equity, or as she learned in the Army, “Always ever-present and looking out for each other.”

She and her husband, Ferman, have five adult children, five grandchildren and two great-grandchildren between them. Like mother, like son: Phillip serves in the U.S. Air Force Reserves.

At Novant Health, she co-chairs the veterans business resources group, which offers team members a chance to share their military and work experiences in an informal setting. (To learn more, email Patterson at [email protected].)

She was even featured in “Military Makeover,” a reality TV show hosted by Montel Williams. Her episode highlighted Novant Health as a welcoming place for veterans to work. “I had five minutes of national TV fame,” Patterson said.

Five minutes of fame, and a lifetime of serving her country and community.

Carrying Memorial Day in their hearts and hard work