Hooked on helping tremor patients: The making of a brain surgeon

When Dr. Charles Munyon was growing up in the college town of Grinnell, Iowa, his grandfather lived with essential tremor. The nervous system disorder causes shaking that usually starts in the hands and sometimes spreads to the head, jaw and voice. Eventually, his grandfather’s hands shook so much he could no longer steady a spoon to enjoy his favorite soup. For the family, it was painful to watch the patriarch’s disease progress.

That history didn’t initially influence Munyon’s career path, though. He left for Williams College in Massachusetts with a plan to double major in English and theater. When he especially enjoyed a first-semester biology course, a new idea for a future in medicine took shape.

Today, Munyon, 45, is head of functional and restorative neurosurgery for Novant Health and a neurologic surgeon at Novant Health Brain & Spine Surgery - Cotswold. He treats brain injuries, epilepsy and movement disorders (including Parkinson’s and tremors) with surgical and noninvasive procedures that can lead to dramatic improvements in patients’ quality of life. He also has shared his skills as a volunteer with the Army Reserve Medical Corps in Iraq – and as a Legos champion at home.

Do you have tremors? Ask your doctor about seeing a neurologist.

Onstage in the OR

Munyon’s experience at University of Pennsylvania’s medical school took an unexpected turn, just as in his undergraduate years. He had planned to study psychiatry, but said he soon realized the field "was evolving toward an anatomic and physiologic understanding of the brain” rather than an exclusive focus on patients’ reflections about their lives. Those narratives could still be essential in therapy, but Munyon was especially fascinated by the neuroscience of what happens in the brain itself and how that influences behavior and health.

The physicians who moved at the fastest pace in medical school were the neurosurgeons responding to serious head injuries. That urgency, along with the need to be creative and make decisions on the spot, appealed to Munyon. Ultimately, Munyon said, it was Dr. Gordon Baltuch, “a giant in the field of deep brain stimulation,” who set Munyon’s course. Munyon had the opportunity to observe the pioneering physician implant deep brain stimulators. The results were immediate and almost miraculous.

“These procedures are done with the patient awake as the electrodes are inserted,” Munyon explained. As the stimulation is tested and current runs through the electrodes, you can actually see the patient's exam improving and their motor abilities evolving. At that point, I was pretty hooked.”

No doubt, the technical aspects of the career fired his imagination. What stood out about Munyon to Dr. S. Alan Hoffer, chief resident during Munyon’s surgery residency, was Munyon’s compassion with patients facing serious illnesses. “There are lots of people who can do a procedure,” Hoffer said. “It’s far fewer who have that level of care and dedication to their patients. He is more than just the carpenter.”

Munyon’s residency at Case Western Reserve University in Cleveland led to another inspired decision. In that city he met his future wife, Vinola, who was earning her Ph.D in urban studies with a focus on economic development and sustainable environmental policy. Munyon went on to become director of functional and restorative neurosurgery at Temple University Hospital, and assistant professor of neurosurgery at Temple University School of Medicine. He joined Novant Health in 2021. 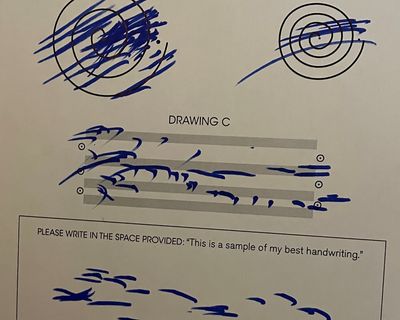 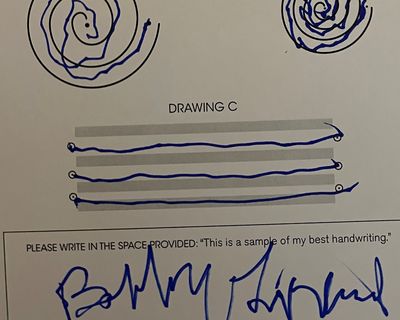 To document the success of tremor treatments, patients fill out a simple form that shows their ability to draw lines and sign their name before and after the procedure.
Before, patient Bobby Lippard’s right hand shook so severely that he could not keep the marker on the page to follow a spiral, draw a straight line or sign his name. It was a different story after the surgery, which you'll see in the picture on the right.

Brain surgery with no cutting?

Munyon enjoys his specialty in part because of its rapid technology advances and innovation. One of the more astonishing procedures available from Munyon and colleagues in Charlotte is incision-free brain surgery, formally known as magnetic resonance (MR)-guided focused ultrasound. It’s used to provide relief from hand tremors associated with essential tremor and Parkinson’s disease. Novant Health partners with INSIGHTEC, a medical technology company, to provide the life-changing procedure.

The procedure harnesses sound wave energy to target the neurological circuit in the brain that helps to control fine-motor movement. When the circuit is misfiring, the surgeon can eliminate brain tissue at the source of the tremor, restoring function by interrupting the malfunctioning circuit. The patient doesn’t even need anesthesia. Munyon estimates about 300 patients have received the procedure, mostly from him – although colleagues took over last year when Munyon spent two weeks at Fort Bliss, Texas, followed by a 90-day deployment to Iraq. (See sidebar.)

Some of Munyon’s patients at home have faced the domestic equivalent of war-zone traumas. While at Temple University Hospital, Munyon cared for a freshman who had leaned against a building window that was poorly secured. The student plummeted two stories onto the pavement. She was rushed into the OR for a life-threatening intracranial hemorrhage.

Though surgery was successful, she needed a second operation three hours later for an issue related to skull fracture. “By the time we were done operating, we had removed a pretty significant piece of her skull,” Munyon recalled. Following recovery, the student graduated with a major in neuroscience. Munyon just wrote her a letter of recommendation for medical school.

All that may sound impressive to the average mortal, but to Munyon’s two daughters, Marlaina, 11, and Maya, 8, it’s just what dad does. They’re more excited by his talents at Legos and board games than by a day at the office. Patients are the ones most grateful that Munyon is good with his hands.

From Charlotte to Baghdad

It may be surprising that a brain surgeon would leave a thriving practice, even for a short time, to care for American soldiers and members of coalition forces. Munyon always wanted his career to include service. An infectious disease physician can join Doctors Without Borders and assist patients anywhere with just antibiotics, anti-parasitic medication and public health knowledge, Munyon noted. “I am virtually useless without, at minimum, a CAT scanner and a fully stocked operating room.”

Those requirements pointed to the U.S. Army. Though he opposed the Iraq War, he believes “the fact that we have an all-volunteer army under the control of civilian leadership is one of the greatest innovations that America’s founders came up with. If we want to preserve that uniqueness, it is necessary for us to remain engaged with what is done with our military. It’s an extension of the will of the American people.” In the army, he found a community “more diverse than any other organization I’ve spent time with.”

Of course, enlisting even as a physician presents risks. Munyon was inspired by an exceptional teacher, Dr. John Pryor, who joined the Reserve and was deployed several times to Iraq. Pryor died the day before Christmas 2008 in a rocket attack outside Mosul.

After 40 years of suffering, no more tremors

Treating MS is a lifelong process. A new clinic makes it easier.

After shattering his spine, this contractor is back on the ladders