How a wife got her dance partner back on the floor

Two of Floyd Jolly’s biggest joys are shag dancing and keeping up with his eight grandchildren.

Having damaged knees limited him doing both.

Jolly battled knee pain for a long time, an unlucky souvenir of age and working 40 years or so as a carpet installer. Squatting, kneeling and lifting had taken a toll on his legs.

“I couldn’t get up and down without hurting,” said Jolly, 62, who lives in Trinity, North Carolina. 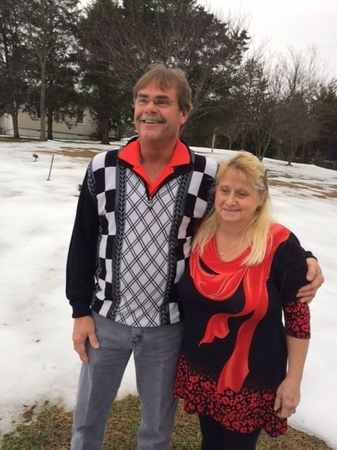 Floyd and Bobbie Jolly. In the top photo, on the right, Floyd (yellow shirt) and Bobbie (white pants) are shag dancing.

“Knee replacement is almost a last resort,” he said. “You want to try every treatment before it comes to that.”

Total knee replacement involves replacing all three components of the knee – medial (inner portion), lateral (outer) and patellofemoral (front). Because only Jolly’s medial portion was affected, he was recommended for a  partial knee replacement on both legs.

The inner portion each knee joint was surgically replaced with a metal/plastic component, to give Jolly a better range of motion and make him pain-free. His anterior and posterior cruciate ligaments were preserved (they’re removed in a total knee replacement).

But the replacement wasn’t a short process.

“Fourteen days afterward, we were (shag) dancing,” he said, referring to his wife Bobbie. “We’re active people. We go.” The Jollys travel throughout the year and dance in numerous locations, almost every weekend.

“He hates to sit still,” Bobbie Jolly said, referring to her husband. “We’ll be watching TV and if some music comes on, his feet are tap, tap, tap.”

Nearly half of American adults develop osteoarthritis in at least one knee during their lifetime, according to the Centers for Disease Control and Prevention.

Jolly said he went through a period of uncertainty before he decided on knee replacement. He researched and talked to others who’d had the repair.

“My advice now to anyone would be to do it,” he said. “Ultimately you want to be pain-free. I’d surprise the doctor every time with how well I was moving. My Novant Health doctors were excellent, the follow-ups went well.”

Moore said being diligent about physical therapy following surgery is a key to recovery.

“That depends on the patient,” he said. “Mr. Jolly had a pretty quick recovery. He’s done well.”

Jolly has a scar on the front of each knee, but they’re not painful reminders. He works as a warehouse manager and installs carpet as a second job. More important, his knees don’t hurt. That allows him to dance whenever he’d like and to chase those eight grandkids.

“Three of them are younger than 8,” he said, laughing. “But my legs don’t bother me and that’s great.”

Recovery times are getting faster, and more change is coming

When it's time for new knees