Think back to biology class where you learned that everybody has two copies of every single gene – one from mom and the other from dad.

In five of the 20,000 genes a person has, if there is just one copy with a mutation then there is a risk of developing Lynch syndrome, a hereditary disorder that increases the risk of many types of cancer.

Compared to Lynch syndrome, many people are aware of the BRCA1/2 genes and the associated predisposition to breast cancer. Nationally known organizations like Susan G. Komen for the Cure and celebrities such as Angelina Jolie and Christina Applegate have been pioneers in bringing attention for more hereditary cancer research associated with the BRCA1/2 genes.

But as medicine advances, especially in hereditary cancer research, doctors are now paying more attention to the presence of Lynch syndrome. Why? The information could be an indication for the need to test patients for diseases like colon cancer far earlier than the standard age of 50, said Ashley Kaminski, a certified genetic counselor at Novant Health Cancer Risk Clinic - Charlotte. If patients and providers are aware that there’s a great risk for cancer, they can also be more vigilant, which could lead to more intervention and earlier preventive care.

To be clear, while Lynch syndrome might sound like an illness, it’s not, Kaminski said. It’s a genetic condition that simply means you could be at a greater risk for certain cancers.

“Every person has seven to 10 genetic mutations in their DNA that are harmful mutations, but they are recessive conditions where just one normal copy prevents issues like sickle cell or cystic fibrosis,” Kaminski said. “The issue with Lynch syndrome is that it’s dominant, so just one broken copy increases the predisposition to cancer.”

In some of the five genes associated with Lynch syndrome, if there are mutations in both of the copies then it can cause a much more severe condition called constitutional mismatch repair (CMMR) deficiency. With CMMR, there is a higher likelihood of cancer in childhood and adds an increased risk for leukemia and lymphomas.

Varying on which specific gene is mutated, affected individuals have differing increased risks for the various cancers associated with Lynch syndrome: 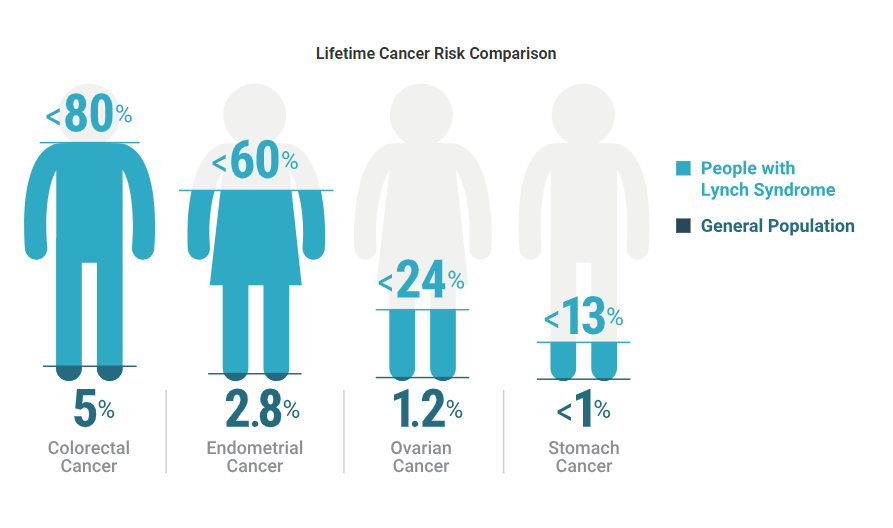 Individuals with Lynch syndrome also have an increased risk to the other cancers mentioned previously, but the percentages vary.

“If I have a female patient that has a history of colorectal cancer and was at or under age 50 at diagnosis, that raises some red flags for her to get tested for Lynch syndrome,” Kaminski said. “If she gets tested and we see she has Lynch syndrome, she has a significantly higher risk of developing uterine or ovarian cancer compared to others.”

Before the official testing starts, Kaminski sits down with the patients to discuss the family history, genetics of cancer and what tests she recommends. The consult is $96 and the test has an out-of-pocket cost of $399 if insurance does not cover it.

But because more providers are referring patients to get genetically tested, many policies now cover testing as a preventive measure for patients who have not been diagnosed with cancer.

“I encourage people to come in if they’re concerned about their family history,” said Kaminski. “Talking it through with a genetics counselor is really beneficial.”

If a patient wants to proceed with the testing, the patient can give either a blood or saliva sample. It is then sent off to the lab to be tested.

“When labs receive the samples, the first thing they do is contact the insurance company,” Kaminski said. “If there is any out-of-pocket cost to the patient, even if just one dollar, the lab will call the patient to confirm the price before proceeding.”

The turnaround time for results can take about two to three weeks.

In genetic testing results that show Lynch syndrome, it helps patients and providers determine a course of action to be more proactive in their care.

For example, one of the Lynch syndrome genes increases the risk of colorectal cancer by 82%. Patients with this genetic mutation might be advised to start colonoscopies as young as 25 and to have one every year.

Suggested prevention measures will be different depending on which gene is mutated and family history. But Kaminski says that these results can give people a better chance in catching cancer earlier, which can increase the chances for a better outcome.

Understanding your family history could save your life. Novant Health is here to help you understand and minimize your cancer risks.