Like many first time mothers, Katie Gillespie had anxiety about her pregnancy. But she’d been through a lot, so she came by it honestly.

There were countless visits to the doctor’s office, difficulty conceiving, a miscarriage and finally, the expense and emotions that came with numerous fertility treatments, including IVF. Yet she was determined to bring a healthy baby into the world. And that resilience paid off when a blood test confirmed IVF was successful.

Then her first ultrasound led to another twist in the road: Two strong heartbeats signaled fraternal twins were on the way. Later Gillespie would learn she was having a boy and a girl. And there were more surprises to come.

As Gillespie’s pregnancy progressed, she visited Novant Health Maternal-Fetal Medicine for routine monitoring in addition to her OB-GYN.

When carrying twins, women are considered high risk because they face more potential complications, and Gillespie’s complications became worse than she could have imagined. As the senior director of internal communications at Novant Health, Gillespie is immersed in the inner workings of health care. Little did she know that she’d get a unique view from the patient perspective as her fellow team members fought the clock to save her life.

From bliss to panic

In early November 2014, about seven months into her pregnancy, Gillespie began to feel unlike herself.

After checking her blood pressure at a nearby pharmacy, Gillespie saw that it was alarmingly high and called her doctor who immediately sent her to Novant Health Presbyterian Medical Center.

Gillespie was admitted because of preeclampsia, a pregnancy condition characterized by high blood pressure. She would need to stay at the hospital for nearly four weeks to be monitored for the safety of both her and her babies.

“I didn’t realize that I would be there for the long haul, but it was comforting to be in the hospital until my babies were born,” Gillespie said.

When it came time for Gillespie to be induced at a little over 37 weeks, her obstetrician Dr. Heather White — now the department chair of obstetrics and gynecology at Presbyterian Medical Center — was ready to deliver Gillespie’s babies. 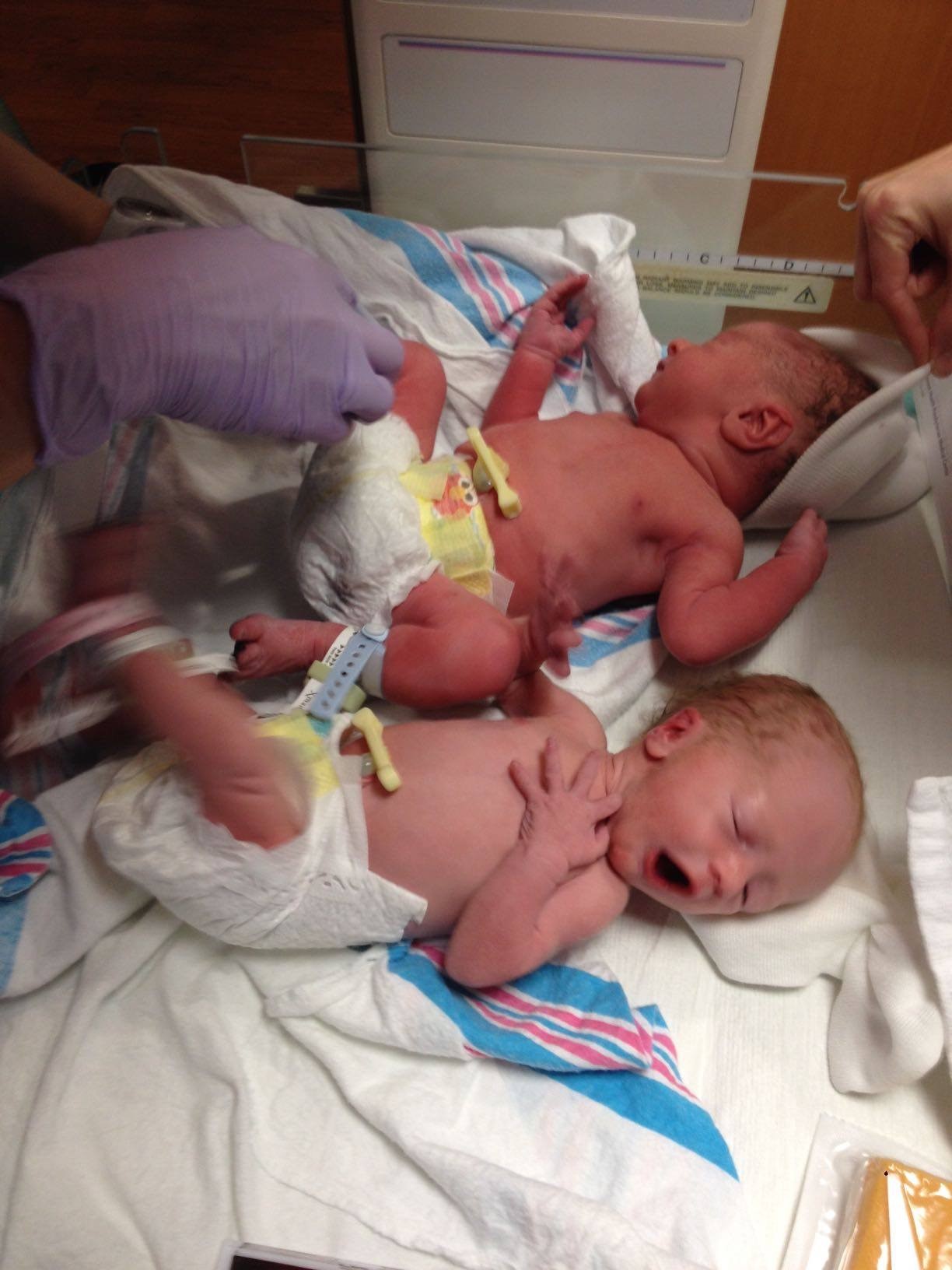 In the delivery of twins, mothers typically deliver in the operating room in case there is a need for an emergency cesarean section, White said.

After more than 24 hours of labor, Gillespie delivered both twins vaginally. Thomas joined the world at 6 pounds and Eleanor followed at just over 4 pounds about 15 minutes later.

Yet, that elation that came with hearing her babies’ first cries quickly shifted to worry.

Gillespie noticed a sensation and told White she thought she was urinating. Then she saw the concern on White’s face. Moments later, it felt like “a hundred people” came running into the operating room.

That’s when Gillespie realized she was hemorrhaging. Badly.

Postpartum hemorrhaging, when there is an extensive amount of blood loss after the delivery of a baby, occurs in about 1% to 6% of deliveries.

“The whole situation was just super scary and all I could think about was if my husband and family knew what was going on,” Gillespie said. And: When would she see her babies?

White and her team tried multiple things to stop the bleeding, without success. After an ultrasound and an examination, Dr. John Allbert of Novant Health Maternal-Fetal Medicine was called in for assistance.

Allbert determined Gillespie had a partial inversion of her uterus; it was trying to turn itself inside out. That had to be remedied immediately. Uterine inversion accounts for 13 percent of postpartum hemorrhaging.

Allbert worked with Dr. David Shaver, one of his colleagues at Novant Health Maternal-Fetal Medicine, to come up with a solution to fix Gillespie’s inverted uterus without having to perform surgery. After all the blood loss and trauma Gillespie had endured, doctors viewed surgery as a last resort.

Shaver had read studies on one successful procedure in which a balloon catheter was inserted into the body and inflated to push the uterus into the correct position. Eager to avoid surgery, they decided to try the minimally invasive procedure.

Dr. Gregory Parker used an ultrasound machine to help Allbert through the procedure.

Allbert inserted the balloon catheter into place and started to fill it with saline.

“We used pressure to put Katie’s uterus into its normal position,” Allbert said. “It was extremely painful for her, but it worked just as well as if we had to go in surgically and adjust the uterus’s position.”

Gillespie quickly recovered and the new family was soon home together.

Allbert is among doctors who’ve presented the new procedure at medical conferences and today the technique is a more common option for mothers who experience an inverted uterus, Allbert said.

Using this experience to help others

Gillespie would call on her traumatic experience to help other moms.

She became a patient representative on a committee of organizations and individuals committed to making North Carolina the best place to give birth and be born.

Her input helped the Perinatal Quality Collaborative of North Carolina to develop protocols to ensure postpartum hemorrhage patients get the support they need from a mental and emotional health standpoint after delivery.

“Katie should be really proud of talking about her experience will help other moms,” White said. “I’m sure retelling her story brought back a lot of hard memories, but it will help us make sure other moms get the care and resources they need for their recovery.”

While Gillespie has worked in health care for years, even that didn’t prepare her for the experience. Here’s what she wants other moms to know: 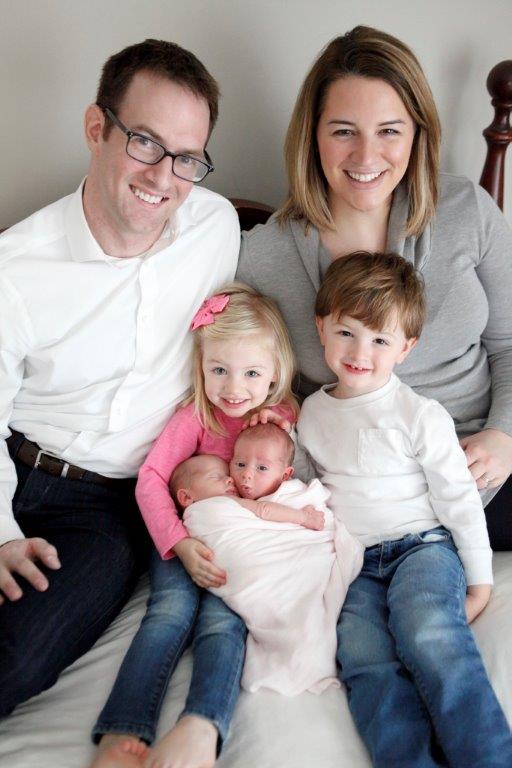 Katie with her husband, Will, Eleanor, Thomas, Katherine and Emma

“I’m eternally grateful for the expertise and compassion shown to me from my care team,” Gillespie said. “My doctors and nurses saved my life.”

A surprise after the struggle

In spring 2017, Gillespie got the surprise of a lifetime: she was expecting again. It reignited a lot old worries from her first delivery.

Anxiety was high already as she had flashbacks to her last delivery and it only heightened when she discovered during a routine ultrasound that she was expecting identical twins. She and her husband could hardly believe it.

“I remember Dr. Parker telling me how uncommon it was for somebody to have two sets of twins,” Gillespie said. “We talked a lot about the best plan for delivering my girls.”

All of the doctors surrounded Gillespie with full support as she went through her second pregnancy. Gillespie returned to Novant Health Maternal-Fetal Medicine for regular monitoring.

Ultimately, Gillespie and her care team decided on a scheduled cesarean section. When the time came, this delivery was far less dramatic as her identical girls, Katherine and Emma, were welcomed into the world.

Gillespie credits the support of her care team, husband, family, friends and colleagues to get her through both pregnancies.

“I learned it takes a village,” she said. “You don’t have to go through it alone. I’m so grateful that I had a wonderful support system and so many medical experts who helped me through everything I experienced.”

Learn more about the "village" and bonds Katie developed in this journey in the podcast below.

A mother’s love letter to her nurses