‘They did an amazing job and saved her life.’
By Karen Garloch

Allison and Jason Smith already had six children, age 10 and under, when Allison found out last spring she was pregnant again.

The couple, who live in Union County south of Charlotte, hadn’t planned for a seventh child. But they assumed it was God’s will and accepted the news happily.

They also knew another delivery could be risky.

Dr. Greg Reynolds, Allison’s Novant Health obstetrician, warned them of that when he delivered their sixth child by Cesarean section in September 2017. Before making the incision, he noticed with alarm that her uterine wall was cellophane thin.

“I can see the baby through your uterus,” Allison recalls her doctor saying. “Your uterus looks like a fish bowl.”

The uterine wall had thinned as a result of cutting and healing from five previous C-sections, Reynolds explained. And that would increase the risk of complications in another pregnancy.

When Allison did get pregnant with her seventh child, Reynolds arranged for her to be monitored regularly by specialists in maternal-fetal medicine at Novant Health Presbyterian Medical Center near uptown Charlotte.

Last November, Annie Joy was born, healthy and strong. But there were post-delivery complications.

It took at least 11 specialists and multiple blood transfusions to save Allison’s life that day.

Reynolds credits her survival to the access to maternal-fetal specialists and quick action by the anesthesiologist and surgeons who specialize in gynecologic oncology and urology. With their help, Allison was able to go home to her family 10 days after giving birth, 15 days in all since she was admitted on Nov. 2.

“I’m just thankful she was in the place where she was, and we had the skilled surgeons to come in and help take care of her,” said Reynolds, who works at Novant Health Bradford Clinic Obstetrics and Gynecology in Matthews. “They did an amazing job and saved her life.”

Reynolds said he began talking to the Smiths about pregnancy risks after their fourth child. His warning got stronger after the sixth. He didn’t scold, but he said he told her he “would recommend not getting pregnant again.”

Allison remembers it little differently. She said he took a “soft approach…He’d say, ‘I think maybe you should enjoy the six you have now.’"

“We talked about ways to prevent getting pregnant again,” Allison added. “My husband and I, we just never really followed up. They thought “we’ll just be careful."

It hadn’t always been easy for Allison, a teacher in Union County schools for 10 years, to get pregnant. She and Jason were able to conceive their first child only after having fertility treatment. Allison was diagnosed with polycystic ovary syndrome (PCOS), a common problem caused by an imbalance of reproductive hormones.

Then came a surprise. While Allison was nursing Eli, she got pregnant on her own - without the fertility drugs – with Maggie, who was born in 2012.

“We didn’t ever think that I would get pregnant on my own,” Allison said.

But then it happened a second time. She got pregnant with Brice, their fourth child, while she was still nursing Maggie. He was born in 2013, just 15 months after Maggie.

At this point, Reynolds asked if Allison wanted to have a procedure to prevent pregnancy. But she wasn’t ready. “We just didn’t feel like we were finished yet,” Allison said. 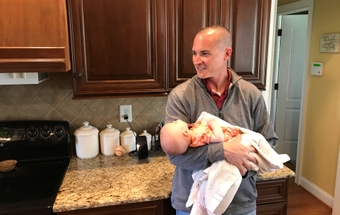 During Jesse’s delivery, Reynolds saw Allison’s thinning uterine wall and got firmer about the risks of another pregnancy. Allison said she and Jason still weren’t sure their family was finished. She said they were “careful” about preventing further pregnancies, but didn’t use any other birth control.

“If God wants us to have another baby, we will,” she said. “And if not, we won’t. We just never really worried about it.”

When Jesse was five months old, in March 2018, Allison began bleeding unexpectedly and went to see the doctor. She was stunned by the results of an ultrasound: She was six-weeks pregnant.

On her drive home, Allison absorbed the news and saw God’s plan. Her father had died of stomach cancer just a few months earlier, in October 2017. When she counted the months, she realized this baby would be born near the anniversary of his passing. It would “take some of the sadness away,” she thought.

Allison called her husband with the news: “I’m pregnant, and I’ve already seen the heart beat.”

‘God gave us this baby’

They were concerned about the risks her doctor had outlined. “The thought of something happening to me and leaving my husband with the (children), I obviously didn’t want that to ever happen.” 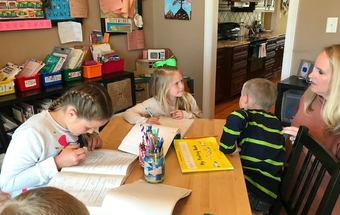 As Jason put it: “Our faith in a big God who has all things under his care kept us from becoming overwhelmed with the fear of what could happen.”  The Smiths are members of Christ Covenant Church in Matthews. “We didn’t ask for this baby,” Allison said. “God gave us this baby."

A week or so later, when the family gathered for dinner, Jason asked if they thought they could make room for another person around their kitchen table. Lilly quickly guessed that her mother was pregnant again. “They were just excited and thrilled,” Allison said.

Because of the risk, Reynolds immediately scheduled Allison for regular visits with specialists at Novant Health Maternal-Fetal Medicine. Over time, they monitored her progress with seven ultrasound tests, instead of the usual two.

One of the first ultrasounds showed that Allison’s placenta was covering her cervix. This condition, known as placenta previa (pronounced pree-vee-uh), was one of the complications Reynolds had worried about.

A later ultrasound showed an even more serious problem. Allison’s placenta was growing into the wall of her uterus, a condition called placenta accreta (pronounced uh-creet-uh). Typically, the placenta detaches from the uterine wall after childbirth. With placenta accreta, the placenta remains attached and could cause severe blood loss after delivery.

Reynolds also worried the placenta could “invade all the way through (the uterus) and go into the bladder and other organs.” This condition is called placenta percreta (pronounced per-creet-uh) and would make surgery even more complicated.

He also told Allison he would have to perform a hysterectomy to remove her uterus.

In typical childbirth, once the baby is delivered, doctors also remove the placenta. But in her case, it would be impossible to detach the placenta and deliver it separately because of the risk of severe bleeding.

Preparing for the worst

Hemorrhage is one of the leading causes of maternal mortality, said Dr. John Allbert, one of Allison’s maternal-fetal specialists. And placenta accreta is a major cause of severe hemorrhage.

“If you’re not prepared, it’ll get you,” Allbert said. “I was there for one, and it’s brutal. It’s bleeding from everywhere. It’s very difficult to tie everything off and get the bleeding to stop.”

If placenta percreta is found, and the placenta grows outside the uterus and into the bladder, “it’s a huge problem,” he said. “It’s amazing how much it bleeds. Women die from this.”

Doctors set Tuesday, Nov. 6, for Allison’s seventh C-section. It was four weeks before her due date. They didn’t want her going into labor naturally.

“They told me from the beginning, if you start bleeding, you need to get to the hospital,” Allison said. When she noticed bleeding on Nov. 2, she went to Presbyterian, where she stayed in bed for the next five days.

On the scheduled day, Reynolds and his partner, Dr. Stephen Moore, delivered the baby without problem. Then the doctors continued their work, sewing up Allison’s uterus with the placenta inside.

They began the hysterectomy by clamping off major arteries. Suddenly, the placenta popped through the uterus. Blood spewed.

Reynolds and Moore called Dr. Kellie Schneider, a gynecological oncologist who specializes in complex surgeries and Dr. Gregory Parker, another ob-gyn physician with Bradford Clinic who was in the hospital and came into the OR to help.

Until then, Reynolds and Moore held their hands inside Allison’s belly, applying pressure to slow the bleeding. Meanwhile, the anesthesiologist, Dr. Jonathon McMullen, called for blood. In all, Allison received transfusions of 13 units, enough to replace her body’s entire blood volume.

When Schneider arrived, she saw Allison had “clearly lost a lot of blood,” and she called another gynecological oncologist, Dr. Janelle Fauci, for assistance. Together they were able to stop the bleeding and complete the hysterectomy.

But to reach the uterine arteries and stop the bleeding, Schneider had to cut through one of the ureters that carry urine from the kidney to the bladder. Allison did have placenta percreta, the third complication Reynolds had worried about.

This meant they needed to call more surgical specialists. Urologists Dr. Daniel Watson and Dr. John Kirkland were able to repair the damage, implanting a stent and reconnecting the ureter to the bladder. (Allison had to wear a catheter for about two weeks. The stent was removed after six weeks, and she has recovered the use of her bladder.)

‘It must have been bad’

Allison spent the first night after surgery in intensive care and stayed pretty groggy for the rest of the week. Annie Joy had to spend three days in NICU and Allison did not meet Annie Joy until Nov. 11. In fact, she did not even remember holding her for the first time, but Jason captured the moment on video for her.

She didn’t learn the full story of her life-threatening emergency for weeks. But she got some clues as she became more alert. She wondered why so many doctors and nurses she’d never seen were checking on her. She also noticed an unusually large number of bouquets around her bed and learned that groups of friends had gathered in the hospital chapel to pray for her.

“It must have been bad,” she said. “We haven’t gotten flowers like that since Baby No. 2.”

Another clue came on Nov. 16, the day she left the hospital. Her husband Jason pulled her close for a long hug and said: “I’m just so glad we’re leaving here together.” 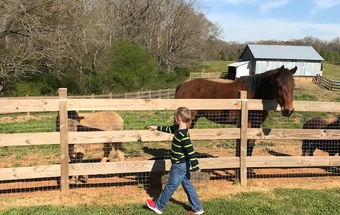 At home in Wesley Chapel, in a house on land that used to be Allison’s grandparents’ farm, the Smiths are back to normal today. They care for a few horses, some chickens, and a demanding burro named Señor Carrots who cracks the kids up when he starts braying for his favorite snack.

Jason, an investigator for the North Carolina Board of Pharmacy, and Allison, a former first-grade teacher, are home schooling their four oldest children. When the time comes, they’ll pull a high chair up to the big kitchen table.

“Our family is definitely complete,” Allison said, “and I wouldn’t change a thing.”

Names and birthdates of the Smith children: 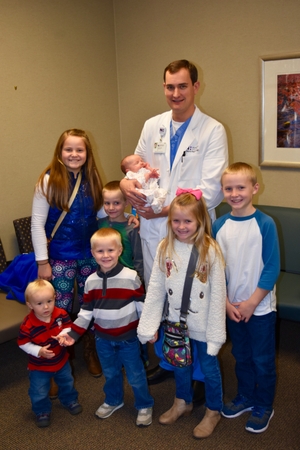