Pacemaker for the diaphragm restores quality of life
By Greg Sullivan

Al Harbury is no stranger to innovation. He worked for Lockheed Martin and later as an aerospace system engineer with NASA’s Ames Research Center in California, before retiring to North Carolina.

But a little more than a year ago, the 87-year-old Clemmons, North Carolina man began feeling symptoms at night that would lead him eventually to seek out new technology to maintain his own health. “I was waking up with a dry throat and gasping for air,” Harbury said.

In addition to frequent nighttime awakenings and excessive daytime sleepiness (which he was already experiencing to the point where it was interfering with his life) it carries an increased risk for cardiovascular and cognitive problems. Harbury was concerned.

He tried one version of therapy that involved nighttime breathing equipment. While it helped him, it  was cumbersome, prevented response to the occasional question from his wife, and made travel complicated. That mattered a lot because he and his wife, Ann, have family on the West Coast.

Doing internet searches, Harbury came across an implantable device called the remede System, developed by the medical technology company Respicardia Inc. The Food and Drug Administration had only recently approved it. With his science background, he was intrigued, and quickly realized it might be a good option.

The new device functions as a pacemaker for the diaphragm, the large muscle that controls your breathing. When central sleep apnea patients stop breathing at night, the device sends a signal to the diaphragm to start working again and breathing resumes.

Fortunately for Harbury, it was available just a few miles from his home at Novant Health Forsyth Medical Center, the first hospital in the Southeast and the first nonacademic medical center in the country to implant the device, according to Respicardia Inc.

His surgeon at the hospital, Dr. Michael Drucker, a cardiac electrophysiologist, and Drucker’s cardiology and neurology colleagues at Forsyth Medical Center, had been heavily involved in the clinical trial process for the device. 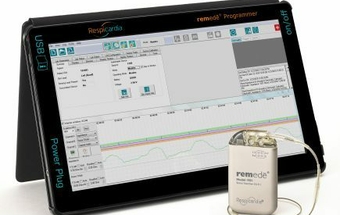 After doing research of his own and talking to Drucker, Harbury became convinced it was right for him. “I knew it would leave me more mobile. I knew it would take care of my rapid breathing issue,” Harbury said. “I looked at the results from the clinical trials and I was convinced that it was a good thing and designed for my exact situation.”

What is central sleep apnea?

It’s important to note that the device is for central sleep apnea and not obstructive sleep apnea.

“Central sleep apnea involves the brain more than the airway,” said Drucker, who sees his clinic patients at Novant Health Cardiology in Winston-Salem. “What happens is when you go to sleep, you have a respiratory center in your brain. In certain individuals, that shuts down and you stop breathing.

“Things that are associated with central sleep apnea are congestive heart failure patients (around 40 percent of them have central sleep apnea), people who have had strokes, people on chronic pain medicine, dialysis patients, and there are also some people who are just born susceptible to it.”

The condition is diagnosed in a sleep study (Forsyth Medical Center has a sleep center, commonly called a sleep lab, on-site), but there are usually signs that the condition might be a possibility, Drucker said. “These patients may wake up more than two or three times a night,” he said. “They don’t feel well-rested in the morning. They get morning headaches or just generalized fatigue. A lot of times their spouses will notice that they stopped breathing at night.”

The FDA approved the remede System in 2017 for moderate to severe central sleep apnea.

The implanting procedure, which must take place before the system is turned on, takes two to four hours. “It’s a very similar implant procedure to a pacemaker,” Drucker said. “It just takes a little longer than a pacemaker because the placement of the wires is a little more challenging. We try to get the wire in veins next to the nerve that supplies the diaphragm and it essentially stimulates the diaphragm and makes it move just like when you breathe.”

There is a clock on the device that’s set to the patient’s bedtime, Drucker explained, and it can detect the body’s angle to know if the patient is lying down or standing. It can also sense movement. If the time, angle and lack of movement are all satisfied, the device stimulates the diaphragm and eventually restores a normal breathing pattern throughout the night for a set amount of hours.

The device, the size of a small cellphone, is placed under the patient’s right clavicle. Four to six weeks after the implant, patients are brought back so that the team can make any necessary adjustments. The patient also undergoes a specialized sleep study.

At this point, the device is covered by some, but not all, insurance companies.

Once his device was implanted and operating, Harbury noticed an immediate difference. “Before, I would get hit with this feeling of, I’ve-got-to-lay-down-and-sleep in the daytime and was taking these long daytime naps,” Harbury said. “I was sleeping about 10 hours at night and taking long naps during the day on top of it That’s all gone now, and “I’ve got much more time available.” 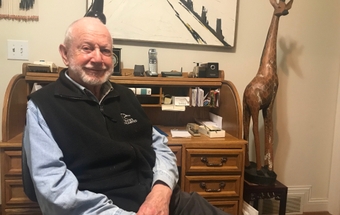 For Harbury, that means better quality time with Ann and their retriever Yipper, who is a cross between a Chesapeake Bay retriever and a Labrador retriever (a Chesador), named for Harbury’s grandfather’s nickname, Yip.

And when his kids and grandkids visit, Harbury said he’s much better able to keep up. He’s feeling fit, healthy and ready for more.

He said his son and some of his grandkids were recently in for a visit from California and had a great outing flying model planes. They take after their grandfather, he said, in that they love watching new technology take flight.

In this case, Drucker can really relate to his patient. “It’s kind of neat because we’re getting contacted by people all over the Southeast as among  the very first in the country doing this,” Drucker said. “We even had some international interest. It really kind of puts us on the map, so to speak.”

At Novant Health, we are local leaders in diagnosing and treating sleep conditions for people of all ages. Our team of sleep doctors and their highly trained staff can study your sleep patterns and design a plan to improve the quality of your rest.

Sleep apnea can be a gateway to heart disease, stroke and dementia