Celebrating Evelyn: How one child’s short life made a difference

Although she lived just 57 days, Evelyn Kennedy Cochran left a lasting impression on everyone she met.

“She was so precious,” said Patty Vandergrift, a neonatal nurse practitioner and Care Always neonatal and perinatal palliative care coordinator at Novant Health Forsyth Medical Center. “She loved being held. It was as if she was saying, ‘I’m part of this world. I am awesome and wonderfully made.’”

Evelyn’s parents, Nicki and Kent Cochran, found out when they were 20 weeks pregnant that something was wrong. Three weeks later, they learned their baby had a rare and life-threatening condition called Trisomy 18, a genetic disorder that includes a combination of birth defects that impact nearly every organ in the body.

Kent was in the third year of his anesthesiology residency at Wake Forest University. He knew what the diagnosis meant. “Babies with Trisomy 18 often can’t sustain the trauma of childbirth,” he said. “We needed to decide how we were going to spend whatever time we had with Evelyn.” 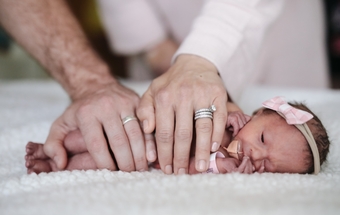 The Cochrans and their team at Forsyth made a birthing plan. Every expectant parent has one – but the Cochrans needed contingency plans. In the event Evelyn lived for only minutes, they arranged for a photographer to be in the delivery room to capture those moments.

“Long before she was out of the womb (at 37 weeks), the palliative care team stepped in and helped us learn how we could parent this very special child,” Nicki said. “They had so much wisdom and endless grace to offer.”

The kind of neonatal palliative care support Forsyth Medical offers doesn’t exist everywhere. “We moved here by chance for Kent’s job,” Nicki said. “And then we find out we need the services provided by this incredible team. Not every family has access to this level of care.”

Neonatal nurse practitioner Vandergrift explains:  “We wanted to offer family-centered care for this treacherous walk. The baby has physical needs, of course, but the family has psychological and spiritual needs. We want to take care of whole families – to work with them on their goals and wishes for their baby.”

Vandergrift worked closely with a multidisciplinary care team that included medical specialists, counselors, the chaplaincy and many others.  “Those were the craziest months of our lives,” Nicki said. “Patty and her team helped us accept who our daughter was and learn to love her because of her disability and not in spite of it.”

“Parenting Evelyn was going to be different from parenting our other children,” Nicki added. “When you get this news, your first thought is: How can you best love this child? But then your next thought is of your other children.” Again, Vandergrift had suggestions. She helped make Evelyn’s birth special for older brother Caleb, now 5, and sister Caroline, now 3. To celebrate Evelyn’s life, the team planned a birthday party for her. 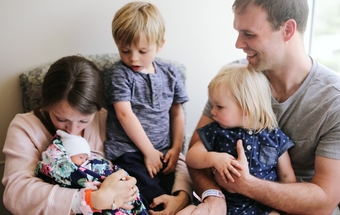 The Cochrans were prepared for Evelyn’s life to last minutes or hours. When they learned they could take her home – she was just 2 pounds, 6 ounces – they were thrilled. And scared. They hadn’t considered the possibility. While Evelyn was under hospice care, her parents were in charge of all the things that accompany parenting a newborn – diaper changing, late-night bottle feedings and comforting her when she woke up crying.

All of it was a joy. The Cochrans took none of it for granted.

For nearly two months, they tried to live an ordinary life as a family of five. Yet there was so much they wanted Evelyn to experience. Simple things like feeling the warmth of the sun, dipping her toes in a pool. And extraordinary things, such as visiting one of America’s greatest treasures. The family made it to Yellowstone National Park, home of Old Faithful. Evelyn died a short time later surrounded by her family.

“Fourteen days is the average lifespan of a child with Trisomy 18,” Kent said. “We feel lucky we had Evelyn for 57 days. We were given a miracle that was wild and undeserved.”

During a time filled with shocks and aftershocks, The Cochrans were in for another one. And it’s one they feel compelled to share. “We have a strong faith,” Nicki said. “And we thought our faith would make this easier. It was a surprise to find out it didn’t. Faith has given us purpose and hope, but it hasn’t lessened our pain.”

The legacy of Evelyn

Evelyn lives on inside Forsyth Medical Center’s Room 3130. It’s been transformed, thanks to the Cochran’s generosity, into a special family room for parents who have just weeks, days or hours to spend with their babies.

The family bereavement/infant palliative care room, known as “The Wildflower Room” – includes a full-size bed – “so the whole family can snuggle,” Nicki said. It also has a reclining chair; rocking chairs and a little art easel for siblings; comfy linens, quilts, throw pillows and blankets; a sound machine; artwork and Bluetooth CD player.

Ann Smith, director of Women’s and Children’s Health at the Maya Angelou Women’s Health & Wellness Center at Forsyth Medical Center, is humbled by the gift. “We’d done the best we could for families like the Cochrans using a regular hospital room,” she said. “We tried to help those families make memories. But there’s no comparison in what we had before and what we have now. The Cochrans created a peaceful, soothing, private space.”

“We can’t take away anyone’s pain,” Nicki said. “But in the midst of the pain, we want those parents to feel loved. We want other families to find an oasis in this room.”

Keeping Evelyn’s memory alive is a way to keep her close. The Wildflower Room is a way of saying, “Evelyn was here. Her life mattered,” Nicki said.

“Evelyn was the most unbelievable person I’ve ever known,” said Kent. “My work as a physician will be forever changed because I’m Evelyn’s father.”

The Cochrans don’t think of the Wildflower Room as their gift to the hospital. “This is a gift to us,” Kent said.

Childbirth is unpredictable — but thinking through your preferences ahead of time can make you feel more confident on the day of. Download our birth preparation guide.