Breast cancer survivor is a strong advocate for 3D mammograms

‘I had no choice but to beat this'

Dr. Patricia Flowers was religious about her mammograms. She had been since she turned 32.

She’d lost her mother to the disease when she was 5 years old. She knew breast cancer was a possibility. And she was committed to staying as far ahead of it as possible.

Then, in the summer of 2014, she found a lump in her breast. Her annual mammogram was just a few weeks away, but she decided to move it up.

“I knew my lumps, but this was different,” Patricia recalls. “What really stood out was that I felt the nodule in my armpit, in my lymph nodes.”

So, she got a mammogram and follow-up testing. Three weeks after she first found the lump, she got the call from her doctor at Novant Health Forsyth Medical Center. She had breast cancer, stage 3. She was 42 years old.

“I was exercising on the elliptical when he called and told me, and I just said, ‘OK’,” Patricia recalls. “And I remember him saying, ‘Do you mind if I ask if you’re alone right now?’ And I said, ‘I am home by myself, but I’m not alone.’”

“I said, ‘It’s cancer.’ That was the first time I’d said it out loud, and that’s when I cried,” Patricia recalls.

That would be one of just a handful of breakdowns throughout her entire cancer journey. She knew firsthand how hard it was going to be. She also believed she would beat it, and her faith never wavered.

“I had no choice but to beat this. I just never had any kind of moment where I thought I wasn’t going to,” she recalls. “The next day I went to visit my mom’s grave, and I had a conversation with her. Then I just went from there.”

Patricia was assigned a team at Novant Health Forsyth Medical Center and forged an instant connection with her doctor, Patricia Zekan of Novant Health Oncology Specialists in Winston-Salem.

“She suggested that I do the genetic testing, especially given my history. And I did have the BRCA2 gene mutation,” Patricia recalls. “She explained that meant the possibility of it coming back was greater if we didn’t really do extensive treatment.”

That’s what she did: Patricia chose to have a bilateral mastectomy with reconstruction. She endured 33 radiation treatments and eight chemo treatments over the course of 16 weeks. Because her cancer was estrogen receptor positive, her medical team also recommended a complete hysterectomy, which thrust her into the throes of menopause with no hope of estrogen-induced relief. 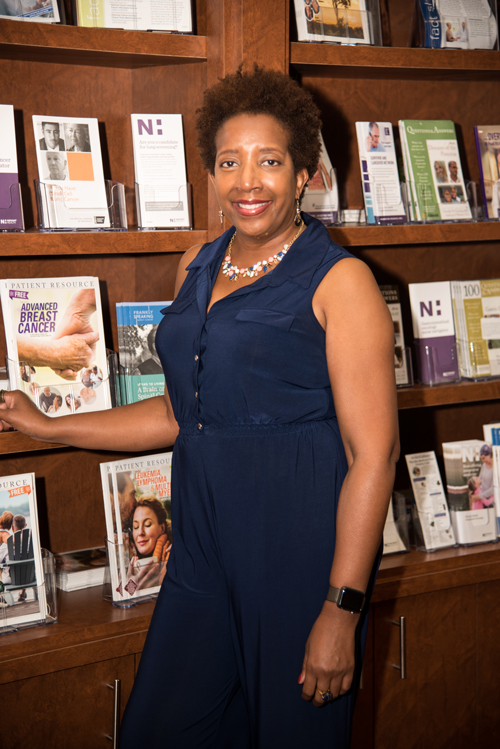 She also started on letrozole, an aromatase inhibitor, in 2015, a one-pill-a-day commitment she was at first told would last between three and five years. Later, that was extended to seven years. Now, her doctor tells her it may be more like 10.

Chemotherapy can wreak havoc because it is eradicating cancer from your system. Some side effects passed Patricia by, while others hit hard.

She was spared the vomiting and lost toenails. Even the nausea was manageable with medication. But she developed a blood clot in her left arm as a result of her port-a-cath. She also lost her sense of taste, right around Thanksgiving, and developed a serious infection in her mouth, which made it painful to swallow.

That wasn’t all bad, Patricia laughs. She lost a few pounds as a result.

Through it all, she had a strong support system. Her posts on Facebook reunited her with old friends and new survivors to form a community of “pink sisters” who understood what she was going through, more than her husband or sister could.

“My sister has never heard the words ‘breast cancer’ with her name attached to it. She’s never sat in that chair and watched that chemo drip. Even though they’ve gone through a lot of the visits, it didn’t happen to them,” Patricia explains. “It’s nice to talk to people who can relate.”

At the same time, some relationships outside her sisterhood have struggled, including her marriage.

Patricia used to say her mother “lost” her battle with breast cancer.

After her own bout with cancer, her perspective has changed and, along with it, her wording.

“I don’t say that anymore. I say that cancer robbed us of this person because no one loses that battle,” Patricia explains. “Every day you get up after you hear the words, ‘You have cancer,’ you’ve survived it.”

These days, Patricia has no tolerance for excuses when it comes to mammograms.

“Every excuse that someone can come up with, I promise I can find a way around it: ‘My breasts are smaller.’ ‘It’s uncomfortable.’ ‘It will hurt,’” Patricia says. “And I’m like, ‘You know what hurts and is really uncomfortable? Getting both your breasts cut off.’ I’m very no-nonsense about that because early detection is key.”

Patricia uses her own story as a case in point.

“My cancer was stage 3. That was with me getting mammograms every year. And I’m convinced that it was there in 2013. But because I have dense breasts and got a 2D mammogram, it was missed. And it just grew,” Patricia explains. “I’m a strong advocate for 3D mammograms, especially for women who have dense breasts, because that will help with the earlier detection.”

We’re advocates for the power of mammograms for every woman, regardless of her ability to pay. That’s why we work every day to increase access to mammograms for under-served and uninsured women across our region. Early detection saves lives, and every gift to our Think Pink Fund goes directly to a life-saving 3D mammogram to someone in our community. Help us today by giving whatever you can to support the cause. No more excuses. Just more mammograms.