Two knee injuries were no match for his drive, and his doctor

C.J. Huntley jumped for a rebound as he’d done thousands of times playing basketball in his young life.

But it didn’t end well, as his right leg buckled when he hit the ground. The otherwise normal pickup game during P.E. class at school left Huntley, then 14, facing an arduous recovery and questions about his potential on the court.

And he had bigger reasons to worry than most teens: the 6-foot-10 forward at Davidson Day School was already on a lot of college recruiting lists because of his height and rapidly developing talent.

“I was nervous,” Huntley said. “I was scared about my future playing basketball.”

Orthopedic surgeon Dr. Jerry Barron of Novant Health Barron, Homesley & Valentine Orthopedic Specialists  repaired Huntley’s ruptured patellar tendon, which attaches the bottom of the kneecap to the top of the shinbone (tibia). Barron also repaired a portion of Huntley’s damaged kneecap. He re-attached the tendon with sutures, rather than metal that could lead to complications later on.

Huntley had another setback later when he sprained the medial collateral ligament (MCL) in his knee. That required a second rehabilitation under Barron’s care. Huntley wore a knee brace while he was sidelined.

“Rehab was difficult,” Huntley said. “The first week, my leg was numb and I couldn’t feel it. I’d do less weight and more repetitions. After a few weeks, it started getting stronger. I could do more weight and less repetitions.”

Huntley did physical therapy for about six weeks, and was facing a four-to-six-month recovery following surgery.

“We went slow with him after both injuries,” Barron said. “He’d had a history of stress fractures. We wanted C.J. to have an easier, better recovery.”

Huntley said it was difficult to sit and watch as his teammates competed. But he had several things working in his favor – youth, a supportive family and responsible coaches.

“Dr. Barron’s a great doctor,” Huntley said. “He’s also worked on college and professional athletes. He told me his motto is he wasn’t trying to get me back on the court quickly, but make sure I was 100 percent healed.” 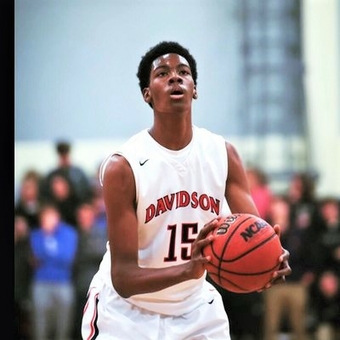 Huntley’s immediate family is familiar with the ups-and-downs of athletics. His dad Chris played college basketball at Wingate (and is the Bulldogs’ second-leading career scorer). Mom Andrea played volleyball and softball at North Carolina A&T. C.J.’s twin sister is Cierra, who has committed to play volleyball at Virginia Tech.

“They’ve all been very supportive,” said Huntley, who lives in Huntersville, North Carolina. “My dad tore his Achilles’ (heel) in college, so he helped me a lot by telling me what to expect and how to get through it.”

Huntley recently finished a strong junior season at Davidson Day, helping the Patriots to a 20-5 record and the second round of the NCISAA 2A playoffs. A standout game for Huntley was Davidson Day’s 62-49 win against Carmel Christian, the state’s top-ranked team at the time. He had 19 points (including four 3-pointers), six rebounds and three blocked shots.

“C.J. is a great listener,” said Davidson Day coach Ron Johnson, also the school’s athletics director. “He tries to do exactly what you tell him to do. He’s a really hard worker, too. He’s focused. He wants to get better.”

More offers are likely to follow as Huntley showcases his talent this summer with the AAU Pro Skills Basketball Elite 17-under team. 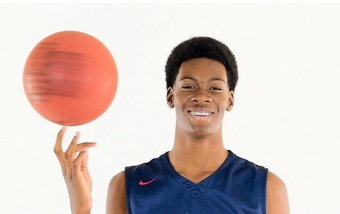 “I’m really happy for athletes and their parents,” Barron said. “I get great satisfaction helping get them back to their sport, living out their dreams doing what they love to do.”

Huntley said his knee is completely healed. No braces. No wraps. No flashbacks. Just a bit of advice for any injured youngster:

“Use time,” he said. “Be patient. Let the doctor tell you what to do, and listen to the doctor. He’s trying to make you better.”