‘He knows how to protect his quarterback. I knew that we had to get him back.’
By Greg Sullivan

But that didn’t stop the senior offensive lineman and college prospect from being blindsided himself by a freak injury.

On the first day with full pads during practice, Escalera and his teammates were doing a commonly used warm-up drill called karaoke, a footwork exercise, when he heard a “pop” in his foot. “I didn’t think anything of it so I just kept practicing,” Escalera said. “But by the end of practice, I could barely walk and I knew there was something wrong.”

He’d broken a bone in his foot and the news was devastating. Would he be able to play again this season? And what would that mean for the team? “Esco,” as teammates call him, was a key piece of a Black Knights squad on the cusp of a promising year.

There was more. Would it kill his chances with recruiters to play college ball? He’d be the first in his family to go to college. Was that dream about to die?

With hard work and help from his care team at Novant Health, Escalera did more than exceed his personal expectations with his recovery and keep his college football dreams intact. He’s helped lead North Davidson on an impressive stretch run that’s put them in this weekend’s 2AA North Carolina Football State Championship game at NC State’s Carter-Finley Stadium in Raleigh. The Black Knights play Shelby High School for the title on Saturday, Dec. 15, at 2:30 p.m.

Right after the practice where he was injured, Escalera went to Novant Health Orthopedics & Sports Medicine in nearby North High Point, to see Dr. Snow Daws, an orthopedic surgeon. She played high school football herself as a somewhat rare female football player. It helped the two form an immediate bond.

An X-ray showed that Escalera had a broken fifth metatarsal, one of the long bones in the foot. Known as a Jones fracture, it’s a common injury among young athletes, Daws said.

Options in cases like Escalera’s could include both conservative treatment and surgery, Daws said.

“The quickest and most reliable way to get him back to the sport was to fix the fracture” in an operation, Daws said. “It’s a minimally invasive surgery (an open reduction and internal fixation surgery, or ORIF) that involves less than a half-centimeter incision and inserting a screw. This allows for reliable healing and a faster return to activities.”

Daws performed Escalera’s surgery a few miles away at Novant Health Kernersville Medical Center. The 20-minute procedure went well. But Escalera had a lot of work ahead of him. 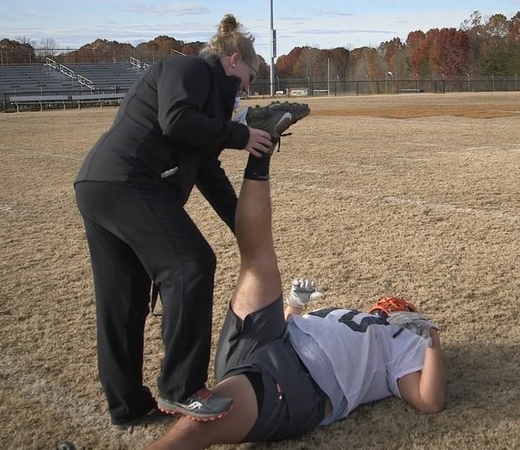 Raish had experience dealing with the particular injury and knew to start by first focusing on flexibility and strength and then moving on to power and speed. After a couple of weeks, the two worked on moves specific for left tackles. With recovery well underway, she put him against a defensive player to make sure he was ready for live action without aid of a brace or other external equipment.

“Knowing that he was a senior, it was definitely my aim to get him back on the field when he was ready,” Raish said. “It was such a difficult injury to Esco and also to the entire offensive line not to have him there because he has such a presence. He knows how to protect his quarterback. I knew that we had to get him back.”

Stepping back on the field

Escalera was out of a boot in six weeks and playing in games at eight weeks. It was just in time for North Davidson’s crucial stretch of games before playoffs. And time enough to get back in sync with teammates. The Black Knights, with Escalera leading the way for the line, defeated rival Ledford in the semifinals, 24-7, which avenged their only loss of the season and propelled them to the championship game.

“Stepping back on the field (a few weeks ago) was a pretty special moment because I didn’t think I’d be able to,” Escalera said. “The whole team was cheering for me. My foot felt better than ever. And it was even better because I went right out there and smacked a kid on the first play.”

Escalera said he’s glad to be back with his “brothers” at North Davidson and to show colleges that the injury didn’t set him back a bit. He said he holds football scholarship offers at multiple schools, including locally at Winston-Salem State University.

“It means a lot to me and it means a lot to my mom that I’ll be the first in my family to go to college,” Escalera said. “I’m going to get a good education and will play football at the same time, which is every kid’s dream.”

Dr. Snow Daws got her game on as a high school football team kicker

She’s her sister’s keeper, with help from ankle surgery

'This can't be happening to me'