‘There’s a reason why this is happening to me, and I don’t know why, but I want to help.’
By Maddie Ellis

Every year, Rhayvin Grant, 23, gets some sort of a cough. So in November 2020, when she felt something coming on during a trip to the mountains, she thought nothing of it.

She was just a week away from graduating from cosmetology school, on the brink of launching a career as a hair stylist that would let her live out her dream of making women feel beautiful and confident. “I always say ‘I don’t work, I create.’”

But when she returned home to Charlotte, she noticed a lump on the side of her neck. Both sides of her throat felt swollen, something that had never happened before. She also had a mass suddenly over her chest, almost in front of her heart. While the lumps didn’t hurt, she knew something wasn’t right.

That night she went to the emergency room at Novant Health Mint Hill Medical Center. After getting multiple X-rays, she was told that the lumps may have been caused by some sort of lymphoma.

“What is lymphoma?” she asked.

Lymphoma is a form of cancer,  the ER doctor responded.

And in that moment, Grant’s world changed. She was on a journey no one imagines taking at 23. There were tears and terror to come. But at the same time, she felt an almost instant resolve to harness the bad hand she’d been dealt and use what she learned to help other women.

An aggressive, but ‘highly curable’ cancer

Before the doctor uttered those words, Grant was imagining a quick visit. After a standard checkup, she pictured leaving the emergency room that night with a prescription for some antibiotics — not a potential cancer diagnosis.

“I paused, and I had a whole anxiety attack, like I broke down crying,” Grant said.

That night, she was transferred to Novant Health Presbyterian Medical Center, where the lumps were biopsied. On Nov. 7, Grant was officially diagnosed with Hodgkin’s lymphoma, a cancer that attacks the immune system. Her cancer was in stage 3, meaning it had already spread to multiple lymph nodes.

Lymphoma is a cancer of the lymphocytes, a type of white blood cell, which are important for the functioning of the immune system, said Dr. Alan Skarbnik, director of the lymphoma and chronic lymphocytic leukemia program and the physician who treated Grant.

There are over 60 different kinds of lymphomas. Hodgkin’s lymphoma is not common, accounting for about 1% of all cancers, Skarbnik said. Hodgkin’s lymphoma occurs when the lymphocytes have grown into a specific type of enlarged cell, called Reed-Sternberg cells. When these cells multiply without control, it can form masses visible on the skin, like the lumps Grant found.

Hodgkin’s lymphoma is aggressive, Skarbnik said. When left untreated, it progresses quickly because it travels in a person’s blood and can spread throughout the body. But it is also highly curable with treatment. Hodgkin’s lymphoma most often affects people between the ages of 20 and 30 and those between 60 and 70, Skarbnik said. In the younger population, it affects women more than men.

Grant describes the beginning of her relationship with Skarbnik as a bit … rocky.

“When he first told me that I was diagnosed, I’m not going to lie to you, I was really mean,” she said.

Grant said she shut down completely, ignoring everyone in the room. It felt like a spotlight was focused on her, and everything else in the room faded to black. She couldn’t look Skarbnik in the eye.

“Nobody wants cancer,” she said. “And I wasn’t really hearing him, because I was like, ‘Why me?’, you know?”

But the overall prognosis was positive, and, with the right treatment, Grant had excellent chances for a full recovery, Skarbnik said. After hearing him explain what she should expect and what was next, Grant could finally process everything that was happening.

Much of their conversation revolved around the treatment options and making sure the final plan would provide the best outcomes and meet Grant’s needs, Skarbnik said.

In cosmetology and hair styling, Grant was looking at a future that relied heavily on the careful, precise use of her hands. So a potential treatment option that came with the risk of developing a condition called neuropathy, or nerve damage, in her fingers was just not going to work.

Skarbnik instantly understood. “For me, I play piano and guitar,” he said. “I would not tolerate having that kind of side effect if it was long lasting.”

They agreed on a chemotherapy plan that reduced the risk of developing long-lasting neuropathy.

Grant appreciated his willingness to discuss her options and, most importantly, his encouragement. And over her six months of treatment, she developed a new outlook on the man who gave her the worst news of her life.

“He always told me, ‘Remember, this is treatable, this is curable. You’re going to get through and you’re going to beat it. And that’s all I kept telling myself,” she said. “I love Dr. Skarbnik.”

The treatment involved receiving chemotherapy once every two weeks. As a working single mother, Grant already had a lot to juggle. Then add in the mental toll of fighting cancer. Grant felt like she was losing control of her life. 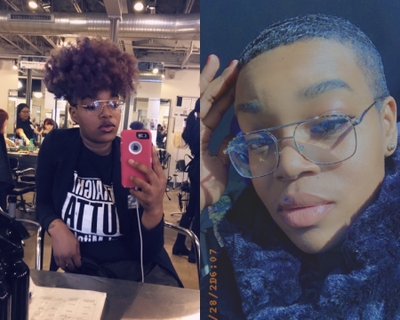 One of the first things she did at that point: stood in front of a mirror and cut her hair off.

Instead of having to watch her hair fall out, she clipped it down to a close-cropped fade. It was scary, Grant said. But with the support of friends and family, it was also empowering.

“I gained so much confidence,” she said.

Journaling, prayer and the support of her family all helped keep Grant’s spirits up throughout her six-month ordeal.

“I’m not going to say every day was all happy-go-lucky because I did have my days where I just sat in the car and cried,” she said. “But then I had to understand, like, this is just temporary.”

The hardest part of the treatment was the sheer exhaustion. Her goal was simple: Just keep going. She graduated from cosmetology school on time. She got a job at a Charlotte hair salon. And she stayed close with her son, family and spirituality.

Grant found support through her new boss, a breast cancer survivor herself. Because Grant’s default mode is to work hard and keep going, her co-workers had to encourage Grant to pace herself.  “They would tell me to sit down, and I wouldn’t,” she said with a laugh.

Throughout the treatment, Grant experienced the feeling of pins and needles in her fingers and feet. Her nails and tongue turned black, and a fingernail fell off.

But even on the hardest days, Grant was always thinking about how she could use this experience to help others.

One of the thoughts that got Grant through her first night’s stay in the hospital was the idea that she could use her skills and her own experience with cancer to support women like her.

“It’s crazy because the only thing I was thinking about was involving my craft in helping cancer patients after everything was done,” she said. “I said, ‘There’s a reason why this is happening to me, and I don’t know why. But I want to help.’”

Grant officially went into remission in January. In May, she finally rang the bell, signaling the end of her treatment, surrounded by her mom, sister and nurses. Grant was regaining control of her life. And a few days after she rang the bell, she hiked to the top of nearby Crowders Mountain.

“I told myself that if I could beat cancer, I could be anything,” she said. “I could get through anything.”

With this returned feeling of control, Grant is already making plans to meet that initial goal of giving back. She has signed up to help with the Charlotte Light the Night Walk fundraiser in November, hosted by the Leukemia and Lymphoma Society.

The ultimate goal, for Grant, is to make sure that patients her age just have someone to talk to, something she didn’t always have. “I had people to talk to, but I didn’t have anybody my age,” she said.

Grant aims to return to school to study trichology, the cosmetic treatment of hair and scalp. As a trichologist, she would work with individuals on cases that involve the scalp, such as alopecia (hair loss) or cancer, by making wigs or helping with treatments.

Grant found support in the Novant Health Cancer Institute Buddy Kemp Support Center and worked with therapist Tiffany Young. Young was actually part of the reason why Grant wanted to share her story in the first place, she said. In sharing that story, Grant hopes to offer inspiration and understanding. Keeping positivity and humility is what kept her going. And she wants other survivors to know it can keep them going, too. It’s given her new outlook on her life.

“So yeah, maybe sometimes I stress about certain things,” she said. “But then I’m just like, ‘Rhayvin, what are you stressing about? You’re living. You got a second chance.’”