Joyce McNeill is not afraid to dream big. The 70-year-old African American woman grew up in the South during segregation. Undaunted, she went on to pave her own trail, start a family and make a mark on the world.

She said this experience gave her the strength she needed to overcome another challenge earlier this year – cancer.

McNeill was diagnosed with a blood cancer known as multiple myeloma in July 2018. More than 30,000 people are diagnosed with the disease each year in the United States.

She was devastated. But hope returned when she met Dr. Jan Moreb at Novant Health Hematology, and learned the treatment she needed was recently made available at Novant Health Forsyth Medical Center in Winston-Salem, North Carolina.

She agreed to become the first stem cell transplant recipient at the hospital since the program launched earlier this year. A decision that could save her life. 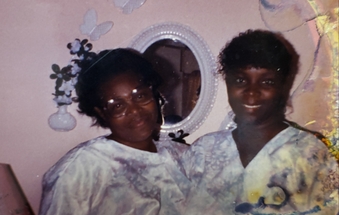 McNeill grew up as the oldest of six in her country home in Dunn, North Carolina. As the oldest, she got up first in the morning to start the fire and feed the chickens. She’d devour a homemade biscuit and join her parents in the fields to pick cotton.

When she got older, McNeill rode the bus to her all-black school two hours away. “I was into Martin Luther King Jr., and all that he was fighting for. When you spend all day in the field, and then hear his ‘I have a dream' speech (in 1963), it just felt right. I remember it brought tears to my eyes.”

McNeil found respite in the church where she sang in the choir. She also enjoyed family time and “courting,” once her dad allowed it when she turned 18.

“We made our own fun back then,” she said, “but I remember thinking, I want my children to have better. Those experiences taught me humility. Sometimes you have to do things you don’t want to do in life, but it makes you stronger.”

Ready to do more

McNeil married, had two children, and left the country to explore life in the big city. Equipped with little more than her high school ring, purchased with her own hard-earned money, she went on to live and work in Arlington, Virginia, Baltimore and Orlando.

“I was a saleswoman, a hotel maid and a factory worker,” she said. “It didn’t matter what the work was, I was proud to do it. My mom instilled a strong work ethic in me.”

After she retired a few years ago, McNeil moved to Winston-Salem to be closer to her two children, seven grandchildren and two great-grandchildren. 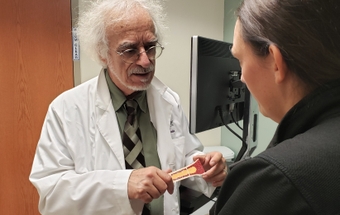 Pain in her back led to a bone marrow diagnostic test and a multiple myeloma cancer diagnosis at the Novant Health Derrick L. Davis Cancer Center in July 2018.

Myeloma is a cancer of the plasma cells that are produced in the bone marrow, the soft tissue inside the bone. Plasma cells are white blood cells that produce disease and infection-fighting antibodies in your body. Myeloma cells prevent these antibodies from developing and an abnormally high amount of these cells can reduce the body’s immune system and lead to high calcium levels, kidney damage, bone disease and anemia. In some cases, it’s fatal.

“The first thing that hit my mind was that I was going to die,” McNeill said.

She was referred to Moreb, a medical oncologist who specializes in transplant and cellular therapy. Moreb explained that multiple myeloma is a rare blood cancer that is twice as likely to develop in African Americans than white Americans, the reason is unknown. He went on to share that Forsyth Medical Center had recently expanded its cancer services to include transplant and cellular therapy for blood cancer patients.

Stem cell transplants for myeloma patients typically involve a three-step process. The goal: Destroy the bad cells and replace them with the patient’s own healthy cells to quickly restore the immune system.

“Most patients think stem cell transplants involve surgery, but that is not the case,” Moreb said. “It is a blood transfusion. The chemotherapy kills the myeloma and everything else in the bone marrow. That’s why the harvested healthy cells are so important. By giving those cells back, it rescues the patient.” Most insurance companies typically cover stem cell transplants as a standard treatment for myeloma cancer. 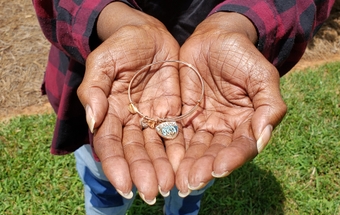 McNeill's 'Healing takes love' bracelet was a gift from her children.

McNeill agreed to be the first stem cell transplant patient at Forsyth Medical Center since the program’s launch. Thanks to her transfusion on May 9, 2019, McNeill is now pain-free, and her cancer is in complete remission. Her hair, which she lost during chemotherapy, is growing back.

“I thought the whole process was amazing,” she said. “I call Dr. Moreb ‘Einstein’ because that is who he reminds me of. I would tell people to trust Dr. Moreb and his entire team. The best part was that we finished my treatment just in time for my birthday party on June 17.”

“Ms. McNeill is a very brave lady, and she did well with treatment,” Moreb said. “Treating rare blood cancers requires cutting-edge technology and a multidisciplinary team approach. We are excited to offer these services right here in Winston-Salem.”

Throughout it all, McNeill kept her faith and she hopes to leave a legacy of courage for her children and grandchildren to follow. “I like to tell them, ‘Always put God first, always be respectful and always love your fellowman.’”

If you or a loved one is suffering from a blood disorder or a blood cancer such as leukemia, lymphoma or myeloma, help can be found at Novant Health Hematology - Forsyth. Whether your condition requires chemotherapy, transfusions, immunotherapy, a stem cell transplant or another treatment, our providers will explain your options and help you determine the best care plan for you.

Find the cancer care you need in seconds

Pancreatic cancer isn’t the death sentence it once was