Giving up dairy and meat isn’t everyone’s cup of tea, but for this doctor it was
By Yoona Ha

Harriet Davis was tired of hearing that you can’t build muscle on a plant-based diet -- along with other misconceptions about a vegan diet. So the family medicine doctor who has been on a plants-only diet since 2007 started Vegan Bikini Doc, a blog dedicated to informing and empowering others to learn more on topics like vegan nutrition and how vegan bodybuilders can get enough protein.

The Salisbury, North Carolina native is a part of a niche community of bodybuilders who break stereotypes that meats and dairy are prerequisites to sculpting a trophy-winning physique. And she has the medals to prove her point, Davis has competed in over 25 bodybuilding shows (and still competes in the International Federation of Bodybuilding), has won national bodybuilding championships and earned her pro-status in July 2014. 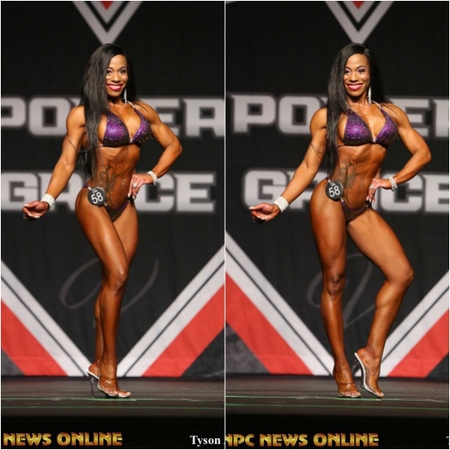 While many may dabble with the idea of going meatless, either for health or for animal welfare, moving forward and sticking with the program can be difficult without knowing what to expect and how to adapt.

So we chatted with Davis to get answers to questions on what you soon-to-be vegans, new vegans and everyone else should know about going on a strictly vegan diet.

Q: Let’s start with defining vegan. What does it mean and how is it different from being vegetarian?

Davis: A vegan diet is a 100% plant-based diet (this means no eggs, dairy or honey). On the other hand, a vegetarian diet is one that’s predominantly plant-based, but you can still eat eggs, dairy and honey. In other words, the main difference between the two is in that vegetarians consume animal products or byproducts and vegans don’t.

Q: What drew you to go entirely plant-based?

Davis: I transitioned to a 100% vegan diet in 2007 shortly after moving to Charlotte, North Carolina from Virginia Beach, Virginia. I have never been able to digest animal products without experiencing some type of associated gastrointestinal distress. So, as I started to become more in tune with my body, I realized that eating a plant-based diet made me feel better.

Q: What are the top misconceptions that people have about being vegan?

Davis: There are several to point out. The first is that it’s hard to get enough protein on a vegan diet. This is obviously a misconception because cows and bison are two animals that are fed only plants (a vegan diet) and many people consume beef as one of their main protein sources.

The second: it’s just too expensive to go vegan. The fact is that it’s easier to eat plant-based on a limited budget than it is to eat a meat-centered diet. Staples like grains, potatoes, bananas, and beans are some of the cheapest and healthiest things you can buy in the supermarket.

One more: that vegans can’t get enough calcium without dairy. Calcium, like many minerals, naturally occurs in soil (not in the bodies of cows).

Q: So you’re in a unique position of being both a vegan and a bodybuilder. Has that been hard?

Davis: A lot of people have the wrong perception that we can’t build muscle on a plant-based diet. When I first started bodybuilding, I had been eating a vegan diet for six years so the transition was not too challenging. The work I focused on was learning how to adjust my macronutrients -- protein, fat, carbohydrates -- to meet my bodybuilding goals.

Now that veganism is so mainstream, it easier than ever to be vegan and compete in bodybuilding. But you must educate yourself on vegan nutrition first. It’s not as simple as substituting one food group for another. You must learn how to substitute those animal-based protein sources and animal-based fat sources – with plant-based options like substituting mock meats and seitan. That's a a high-protein vegetarian food made from cooked wheat gluten.

Q: What does a typical day’s eating look like for you?

For a midmorning snack: Tofu scramble

For an afternoon snack: Tempeh and fruit (avocado preferred)

For dinner: Salad with chickpeas (or black beans) and textured vegetable protein

Q: How do you plan on further correcting the misconceptions that people have about vegan diets and vegan bodybuilders?

Davis: After winning PETA's "Sexiest Vegan Next Door" award, this national contest afforded me a larger platform to share my perspective as a plant-based primary care physician. I became a family medicine physician so that I could help people focus more on preventing disease and maintain their health rather than on chronic disease management. One of my long-term goals is hosting/co-hosting a TV show to educate people about health, fitness and nutrition. Through this platform, I plan to make it simple for people to transition into a vegan diet.

Courtesy of Dr. Davis’ blog, The Vegan Bikini Doc, we borrowed this fajitas recipe with a vegan twist: 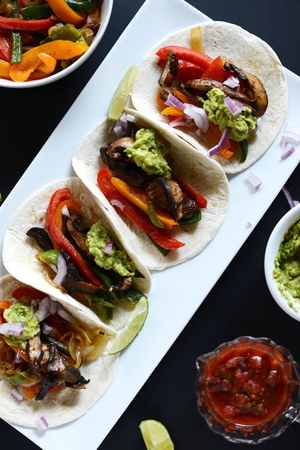 Instructions
1. Heat a large skillet and a medium skillet over medium-high heat. Once hot add a dash of olive or coconut oil to the large skillet, then the onion and peppers. Then season with cumin, chili powder, cayenne pepper, and garlic powder.

2. Cook until softened and slightly caramelized, stirring often. Set aside and cover to keep warm.

3. At the same time, add a dash of oil to the medium pan, then add the mushrooms. Season with a pinch of sea salt and once softened and brown add a dash of A1 steak sauce for more flavor. Remove from heat, set aside and cover. (Yes, A1 steak sauce IS vegan-friendly. Click on the link below to see a list of vegan-friendly condiments: http://www.peta.org/living/food/condiments/

4. Prepare guacamole by adding two avocados to a bowl then adding the juice of half a lime and a generous pinch of salt. Fresh cilantro and onion is optional.

6. Serve the warm tortillas with peppers, onions, mushrooms, guacamole and any other toppings you desire such as salsa, hot sauce, and veggie cheese or vegan sour cream.

What you know about multivitamins is probably wrong

Can the high-fat keto diet really help with weight loss?