Unbearable neck pain and no relief. Then he found the right doctor

It started in Dean Spicer’s legs — a shooting, throbbing pain that jolted him awake and never let up. Then, little by little, it moved into his neck.

"It hurt so much it was all I could do to straighten my head and hold it up — I didn’t even realize I was that way," the 64-year-old ABC liquor store clerk said. "It was just so painful to do the normal things in life — I hurt 24/7."

For about 11 years, Spicer crisscrossed the Triad of North Carolina in search of relief. He had various kinds of back injections and even a procedure to burn nerves one doctor suspected of causing the pain. Nothing helped. Several health care providers told him flatly there was nothing they could do. Finally, someone urged him to call spine surgeon Dr. Chase Bennett of Novant Health Brain & Spine Surgery —Kimel Park in Winston-Salem.

"I’d rather die than live like this," Bennett remembered Spicer telling him at their first meeting.

An MRI of his neck revealed exactly what was going on. Due to inflammatory arthritis, small bones in his neck were breaking down, causing his head to fall forward.

But Bennett had a ready prescription — a complex neck reconstruction known as thoracic pedicle subtraction osteotomy.

Done over two days, the surgery would restore the normal curvature of Spicer’s spine, allowing him to hold his head up and relieve his pain. The procedure is rare — Novant Health Forsyth Medical Center, a comprehensive spine surgery center, does one or two a year — and it’s risky.

"There was a chance I could be paralyzed or die — Dr. Bennett said that could happen," he recalled. "It’s scary but when you’re living with pain 24/7, I had no life anyway. I was so tickled — anything had to be better than what I was living with." 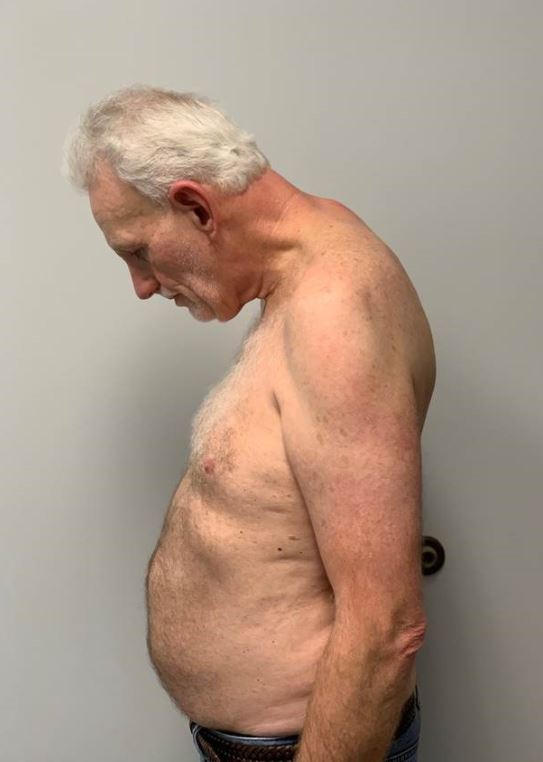 Dean Spicer prior to his neck reconstruction.

And once Spicer has healed fully, relief should be permanent.

"These big surgeries are not for everybody — and the reason you’d need it is not very common," Bennett said. "But they can offer a great deal of pain relief and improvement in quality of life for the right person."

Unless they’re in pain, like Spicer, most people probably don’t give their spine a second thought.

To understand this surgery, it’s helpful to know that your backbone is made up of various bony parts that give your body structure and protect the spinal cord and nearby nerves. Ligaments and muscles attach one vertebra to another. In an osteotomy, surgeons subtract bone, allowing the spinal column to be realigned permanently.

Bennett operated on the front of Spicer’s neck July 13 and on his back a day later. All told, Spicer was on the operating table more than 10 hours.

The first day, Bennett removed four deteriorated discs in his neck. Those were replaced with wedge-shaped grafts that would allow surgeons to correct the gentle curve of his spine by bending the vertebrae backward, into its normal position.

The second day’s surgery was longer and more complex, and Bennett was joined by his partner, Dr. Ross McEntarfer.

The team opened Spicer’s upper back and carefully pushed away his muscles. Then, over about seven hours, they cut away structural elements called pedicles, and other parts of five vertebrae. Once the spinal cord was safe and enough bone had been removed, Bennett raised Spicer’s head into a neutral position and locked it all in place with titanium screws and rods. In all, surgeons placed screws into 11 bones from Spicer’s upper neck to midback.

Recovery ahead of schedule 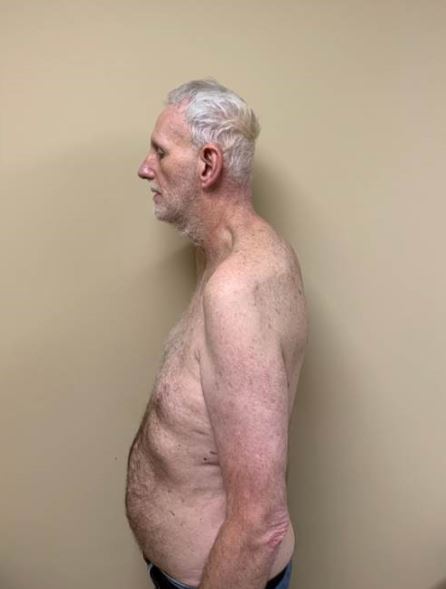 Dean Spicer after his neck reconstruction.

He was on his feet the next day. Nine days later, Spicer began physical therapy, which he continued at home this fall — stretching, walking, exercising his neck in different ways to make it heal.

The results have been nothing short of life-changing.

"Each day I get up, I feel that much better than I did the day before," Spicer said recently. "I have no pain in my legs at all. And I think my neck will have no pain either when it is fully healed" in nine months to a year.

Five months into his recovery, "he’s at or ahead of schedule," Bennett said.

Spicer’s implants should fuse to the bone within a year and then, he will be able to live life without restriction — though his spine will be less flexible than in his prime.

Once he has Bennett’s blessing, Spicer looks forward to doing all the activities that had become difficult or impossible to enjoy.

"I’ve always been a sports guy, anything outside, going to the beach," he said. "But I couldn’t do anything because I hurt so bad all the time — my normal life was over."

He looks forward to dribbling a basketball, playing in the softball league he enjoyed much of his adult life — even mowing the sprawling lawn at his home in Elkin, North Carolina.

Spicer is also eager to get back to work early next year and expects the job will be much easier now. He’s thrilled about it.

"People don’t realize how much they cherish something until you’re not able to do it — just the simple things in life," he said. "For anybody that has pain like I did 24/7, there is stuff that can help you — if you find the right doctors."

Expert neurological care, wherever you are

Brain surgery restores life for patient after 18 years of suffering

From rocket scientist to brain surgeon