When COVID-19 hit last year, Lucas Johnson decided to start running. Like everyone else, the 24-year-old quickly became tired of “quarantine life,” and he concluded that the pile of pizza boxes and frozen dinners in his freezer were doing nothing for his health. His solution: train for a half marathon.

That was until a sharp pain developed in his right hip during an afternoon run. The pain was so severe that he had to hobble back to his apartment.

Far from home — he’d recently relocated from Harrison City, Pennsylvania, to Charlotte for a new job — he called his mom for advice. This sort of thing isn’t supposed to happen to a young and healthy bachelor, he figured. Over the next few months, his injury led to a string of frustrating doctor’s appointments. Despite several exams, physical therapy and steroid injections, no one could ease his pain or identify the source of the problem.

Then he was referred to Dr. Landry Jarvis, an orthopedic surgeon at Novant Health who oversees a new hip preservation program in Charlotte. Jarvis diagnosed the issue as a femoroacetabular impingement (FAI), or an irregular bone growth which caused two bones in the hip to rub against each other, eventually causing a soft cartilage tear.

Jarvis explained that if you’re not trained in hip preservation, the more subtle versions of hip impingement can be a challenging diagnosis: It’s often misdiagnosed in patients that are 20 to 45 years old. It’s not known how many people have FAI. In most cases, it develops during the adolescent years and only presents when painful symptoms occur – usually after exercise or an increase in time spent in sitting positions. Unfortunately, many patients are misdiagnosed and told that nothing can be done until the condition worsens as they age, and then a hip replacement can be recommended.

However, Jarvis was able to correct the problem with a minimally invasive outpatient procedure called a hip arthroscopy. Johnson, who recently started running again, was relieved to finally have a diagnosis and treatment plan that worked.

From crime solver to life coach

As a child, Johnson had his heart set on becoming an FBI agent. He loved watching crime shows on TV, and became fascinated with picking locks. His parents even got him his own set of handcuffs, which he enjoyed immensely until there was an unfortunate “cuffing incident” with his aunt.

When he turned 12, Johnson went on to start his first business, a web development company, out of his parents’ basement. And then at 16, after one of his close friends took his own life, Johnson launched an online life-coaching business, which he continues to operate today as a side gig.

“My friend’s death had a really big impact on my life,” he said. “I wanted to start a passion project where I could simply create videos that would talk about important things like bully prevention, pursuing your life goals, and even open the doors to the possibility for others to reach out for one-on-one coaching when time permitted. The platform serves as an outlet for me to simply remind people that their lives have purpose and no matter what direction they go, they always have someone rooting for them.”

He went on to graduate with a business management degree from Pennsylvania State University. After exploring the country in an epic road trip with a friend, he landed a cyber security job in Charlotte in 2019.

Find an orthopedic doctor near you

With what felt like the whole world in front of him, Johnson described the quick onset of the pandemic, followed by his sudden hip injury, as a truly life-changing event. The worst part: not knowing what was wrong and the fear that the pain in his right hip might be permanent.

He ended up seeing five orthopedic surgeons, but it wasn’t until he was referred to Jarvis that things started to make sense. Jarvis ordered a special lateral x-ray, which revealed the easy-to-overlook FAI.

Jarvis explained that the hip is a ball-and-socket joint. In Johnson’s case, an irregular bone growth known as a CAM prominence developed on the femoral head (top of thigh bone) causing pain to occur when it rotated (as the ball) into the acetabulum (hip socket). Over time, this grinding caused a tear to develop in the labrum – the protective layer of cartilage between the two joints.

Jarvis recommended a minimally invasive two-step outpatient hip arthroscopy procedure. Through tiny pin-hole incisions, he would insert a camera and a high-speed burring tool to smooth over the CAM bone growth, thus removing the impingement and allowing the femoral head to rotate freely. Then, he would repair and reattach the torn labrum to the bone. Johnson agreed to the surgery but admitted that he still felt nervous.

“With COVID-19 visitor restrictions in place, I couldn’t have my parents in the room with me,” he said. “But I was really grateful for how Dr. Jarvis and all of the nursing staff took care of me. They could tell that I was nervous, and they filled in as not just my medical team, but also as my extended family.”

While the full recovery process for a hip arthroscopy procedure can take several weeks, Johnson was able to stand up with crutches, walk and return home that same day. Twelve weeks later, he started to jog again, this time pain-free.

“When you think about hip surgery, most people picture their grandfather’s hip replacement,” Jarvis said. “But hip pain is more common than you think in young and middle-aged patients, and unfortunately too many have been misdiagnosed and told that they’ll have to wait 20 years for a total hip replacement.” 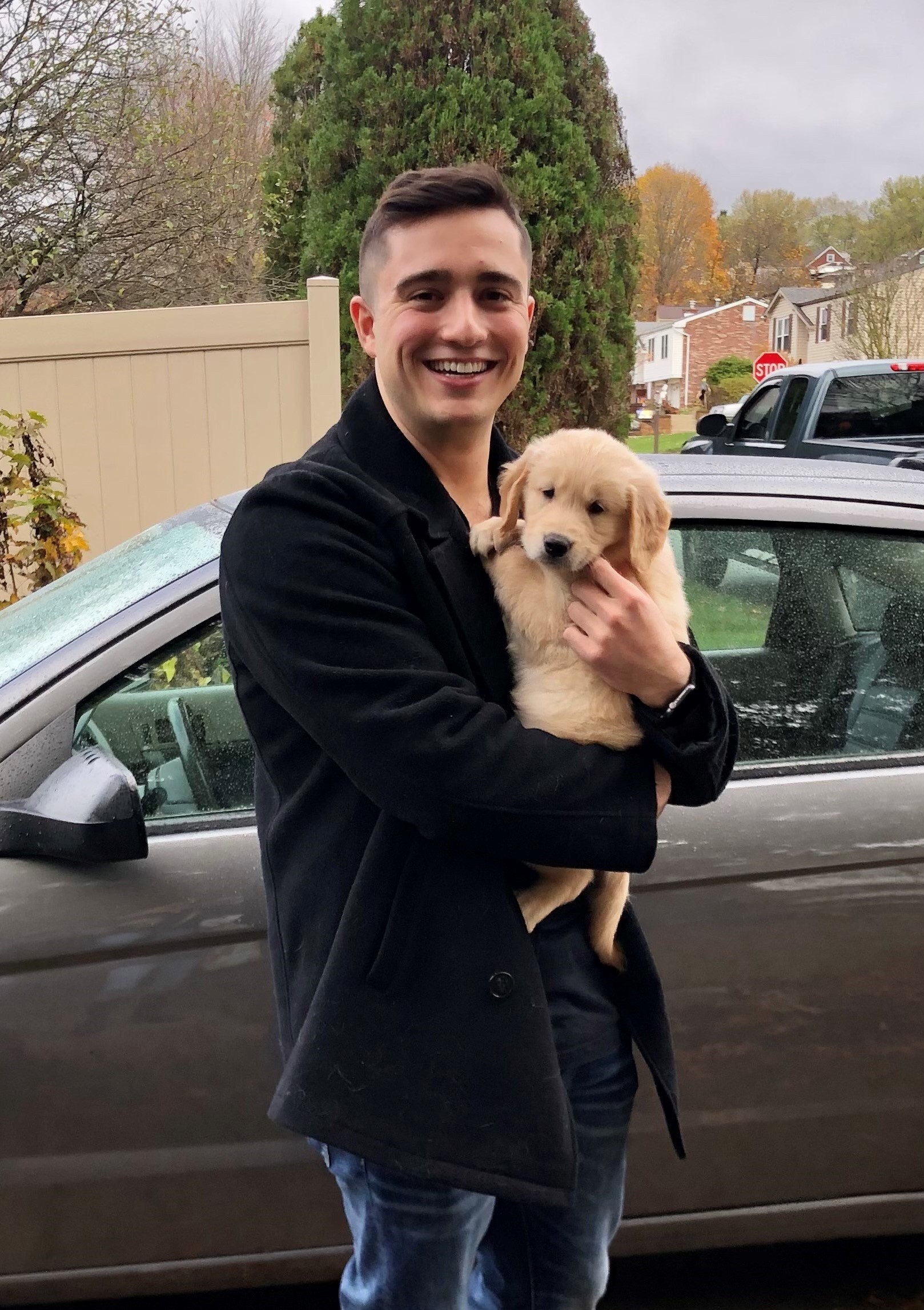 Lucas Johnson shared that Ollie, his golden retriever, helped him through the recovery process.

“In the past, there used to be only two main options, either replace the hip or not,” said Haigler. “But now, we’re able to offer patients more options. And the beauty of a hip arthroscopy is that we’re able to safely maintain the patient’s native anatomy, meaning that the patient can continue to run or exercise on their natural hip without fear of damaging an implant.”

While hip arthroscopy procedures have been around for years, both surgeons agreed that recent advancements in technology have allowed these procedures to be performed less invasively and with improved precision and accuracy.

Not every patient will be an ideal candidate for hip preservation surgery. But the most common patient typically falls between 20 to 45 years-old, with nagging hip pain and little to no arthritis.

Johnson concluded: “If COVID-19 has taught me anything, it’s that you can’t predict what’s coming next. I’m just so thankful to finally have an answer, and to be able to get around again without pain.”