There’s a lot more than turkey in that ‘healthy’ sandwich

Where sodium is hiding in your kitchen
By Cliff Mehrtens

It’s lunchtime, and like millions of Americans daily, you choose a ham or turkey sandwich. Compared to other items on the menu, those are healthy, right?

Homemade or deli-bought, your seemingly innocuous choice could be dangerously loaded with sodium. Consuming too much salt is a leading cause of high blood pressure, which is a major contributor to heart disease and stroke.

There’s plenty of sodium in the bread and processed meat. But it’s also higher than you may think in the mustard, or slice of cheese. And that pickle wedge on the side adds a few hundred more milligrams of sodium, all before you’ve bitten into the bag of potato chips and chugged a sports drink (both high in sodium).
The bottom line: That sandwich alone contains about 1,500 milligrams of sodium, roughly 65% of your daily recommended consumption. So, how much is too much? 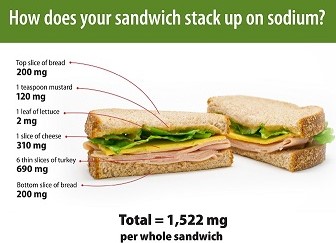 “In the American diet, the bulk of sodium comes from restaurant food and foods that are prepackaged,” said Dr. Sandy Charles, a cardiologist at Novant Health Heart & Vascular Institute - Charlotte.

It’s easy to think since something doesn’t taste salty, or you’re not heavy-handed with the table salt shaker, you’re avoiding sodium.

But it’s stashed in many of the foods we eat regularly, accounting for up to 70% of the sodium we consume.

Some foods that are high in sodium may surprise you:

Being mindful of how much sodium you consume is important, Charles said. For instance, if you have a salad, don’t top it with croutons or a creamy dressing.

The U.S. Food & Drug Administration recommends that adults eat no more than 2,300 milligrams of sodium each day as part of a healthy diet. That’s the equivalent of 1 teaspoon of salt. 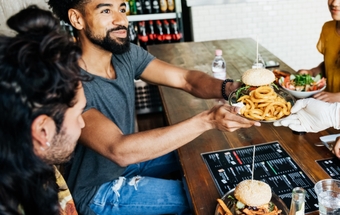 About 90% of Americans older than age 2 consume too much sodium. The average daily intake for Americans is 3,400 milligrams.

Why is sodium so prevalent? It enhances flavor, preserves freshness and can improve the texture and appearance of food.

However, Charles said there are alternatives to limit your sodium without sacrificing taste.

While limiting sodium is important in preventing cardiovascular disease, Charles said it's simply part of an overall strategy. Key steps include eating plenty of fruits and vegetables for nutritional value, exercising regularly, decreasing the stress in your life and getting enough sleep.

Here’s why you can’t ‘out-exercise’ a bad diet

How did Holly lose all that weight? She had a team.