‘Our job is to listen to, believe and care for the patient’
By Page Leggett

Sexual assault isn’t just an intruder in a ski mask breaking into your home and attacking you. Rape can happen in a marriage or other committed relationship. Sexual assault can happen on a date. Or at a party after everyone’s had a few drinks.

There is often gray area. In 8 of 10 cases of rape, the victim knew her (or his) assailant, according to the National Sexual Violence Resource Center. Even if you’re unsure if what happened constitutes a crime, it’s important to be medically examined – and soon. A National Institutes of Health (NIH) study estimated that as few as 21% of victims of sexual assault seek medical care.

And Novant Health offers a team of compassionate nurses with a specialty in treating sexual assault survivors who are ready to be allies, caregivers and confidantes. Sexual Assault Nurse Examiners (SANE) are a resource available to sexual assault survivors seeking care at the hospital. And they’ll be with that patient for the duration of her (or his) visit. Alyssa Romine, lead forensic nurse for Novant Health in Charlotte, is one of 13 SANE nurses serving the four Novant Health hospitals in the area. Overall, there are about 20 SANE nurses in the Novant health system and more in training.

Are you surprised by the male pronoun above? Don’t be. “Sexual assault happens to all kinds of people,” Romine said. “We’re trained to respond the same way to all genders and all ages of patients we see. But exams are different for children; they’re going to be developmentally appropriate.”

The patient is in control

During the visit, it’s important that patients feel that they’re in control, Romine said. “The exam itself is a very vulnerable position for the patient, especially after they’ve just experienced that kind of trauma. And so, we make sure the patient understands they’re in charge. I’ll say, ‘If there's any part of the exam that I explained to you that you’re uncomfortable with, we can talk about it further. You can tell me ‘no.’’ Patients have a choice. We do everything we can to help them feel comfortable and confident.”

A post-sexual assault exam can be lengthy, but Romine and her team are there from beginning to end. A SANE nurse might spend four or more hours with each patient.

“Our patients have been through a major trauma,” she said. “A lot of times, they haven’t slept for hours since the assault. We try to get the sexual assault exam done so the patient can have some comfort measures.” 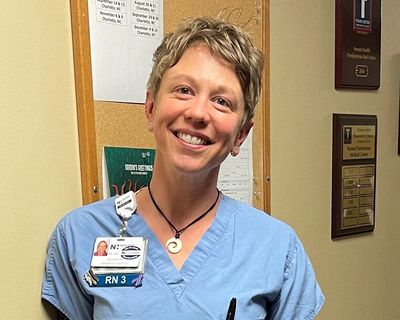 SANE nurses are sometimes called to testify in court, but “legal considerations are never our primary goal,” Romine said. “Our primary goal is to care for patients.”

There can be an assault and no injuries, and there can be injuries and no assault, Romine pointed out. “You could have injuries with consensual intercourse,” she said. “As nurses, we can tell if there’s an injury, but we can’t use the presence of injuries alone to determine what happened, and that’s why talking to the patient about their experience is important.”

“It’s not the nurse’s job to figure out whether a crime occurred,” Romine continued. “Our job is to listen to the patient, believe the patient and care for the patient. It’s understandable that they have complex feelings and emotions about what happened. Part of my job is to help them understand that it’s not their fault.”

A patient’s interview with law enforcement is separate from the medical examination and may happen before or after – depending on when the victim called 911. Sometimes, survivors come to the hospital accompanied by police officers.

And if the survivor comes to the hospital before she (or he) has called the police, SANE nurses can help with the process. “We often explain to patients what their options are, walk them through the choices that they have,” Romine said. “Some patients want assistance calling police.” SANE nurses help with that, too.

Although evidence collection is often part of a sexual assault exam, seeking medical care is about much more than that. Prompt medical attention means prompt identification and treatment of injuries. It also:

“There’s a point when it can be too late for evidence collected to be beneficial,” Romine said. “Ideally, we should see patients within 72 hours of an assault. And the sooner, the better.”

If it’s outside 72 hours, and “the patient wants to proceed with evidence collection, even knowing the likelihood is diminished there’ll be evidence available, we’ll proceed. But they are always going to be cared for.”

SANE nurses are trained to look for details that others might overlook. They know how to look for signs of strangulation, for instance. And those aren’t always visible.

In Charlotte, thanks to a grant from the Governor’s Crime Commission, every ER nurse and provider and every medic and CMPD police officer was trained last year on looking for signs of strangulation.

“A woman who’s been strangled by her intimate partner is over 700 times more likely to die at that partner’s hands,” Romine said.

Romine learned about strangulation as a predictor of more violence and death through the National Institute on Strangulation Prevention. One of the instructors is a national expert who’s been in the news a lot lately. Dr. William Smock testified for the prosecution in the Derek Chauvin trial. Chauvin is the former Minneapolis police officer convicted of second-degree murder in the death of George Floyd.

“With patients who’ve been strangled by intimate partners, we want to identify these women – and it is largely perpetrated on women – early,” Romine said. “There can be underlying trauma that might not easily be identified by external injuries. So, we help ensure appropriate medical treatment and imaging to make sure there’s not an internal injury. Originally it was thought that if there are no markings, then nothing happened. That’s not true.”

The second part of that goal is identifying those women and “wrapping them up in services.”

“They are often living in a home with somebody who’s controlling them,” Romine said. “They need to understand the severity of what happened. A lot of victims don’t know how serious strangulation is. They’ll tell us about being punched and hit, but then it’s kind of a side note: ‘Oh, yeah, and he choked me out.’”

If you have been assaulted, don’t delay seeking medical care. If you even think you were sexually assaulted, come to the hospital. Rape survivors usually know their assailants and are generally intimately involved with them, which can lead victims to wonder if what happened qualifies as rape.

Romine wants survivors to know: This isn’t your fault. Come in and let us care for you.

Domestic violence continues to spike during COVID: What you need to know