Learning CPR can save someone’s life
By Cliff Mehrtens

Jan Zamudio’s training run was like hundreds before it. She’d completed five marathons and was training for her 20th half-marathon.

She and a friend were almost finished with a 10-mile run on a fall morning in 2017 near her home in Davidson, North Carolina. About a half-mile from home, Zamudio stopped because she was feeling dizzy.

“Next thing you know, I’m on the ground,” she said. “I don’t remember anything after that.”

Zamudio, 43, had suffered sudden cardiac arrest, a condition in which the heart suddenly and unexpectedly stops beating. Blood stops flowing to the brain and other vital organs. It can often kill you if it isn’t treated within minutes.

About 356,000 people experience sudden cardiac arrest each year and nine out of 10 victims die. When a bystander intervenes to immediately perform CPR (cardiopulmonary resuscitation), survival rates usually double or triple.

Fortunately for Zamudio, her running friend and people nearby dialed 911 and began CPR as the paramedics were en route.

“In terms of brain damage, every second of blood flow counts,” said Dr. Thomas Kambur of the Novant Health Heart & Vascular Institute. “If someone can perform CPR for four or five minutes before EMS arrives, or someone retrieves an AED (automated external defibrillator) in the building, that could be the difference between life and death for that patient. It could be the difference between major brain damage or not.”

Sudden cardiac arrest strikes people of all ages who seem to be healthy, including a seasoned runner like Zamudio.

Not the same as a heart attack

It’s a common misconception that sudden cardiac arrest and heart attack are the same thing.

Heart attack is when part of the heart’s blood supply is blocked or reduced, which damages the heart muscle. Think of it as a “plumbing” problem, of sorts. When people have heart attacks, they are awake and their hearts are beating. They are responsive, breathing and don’t need CPR or an AED. 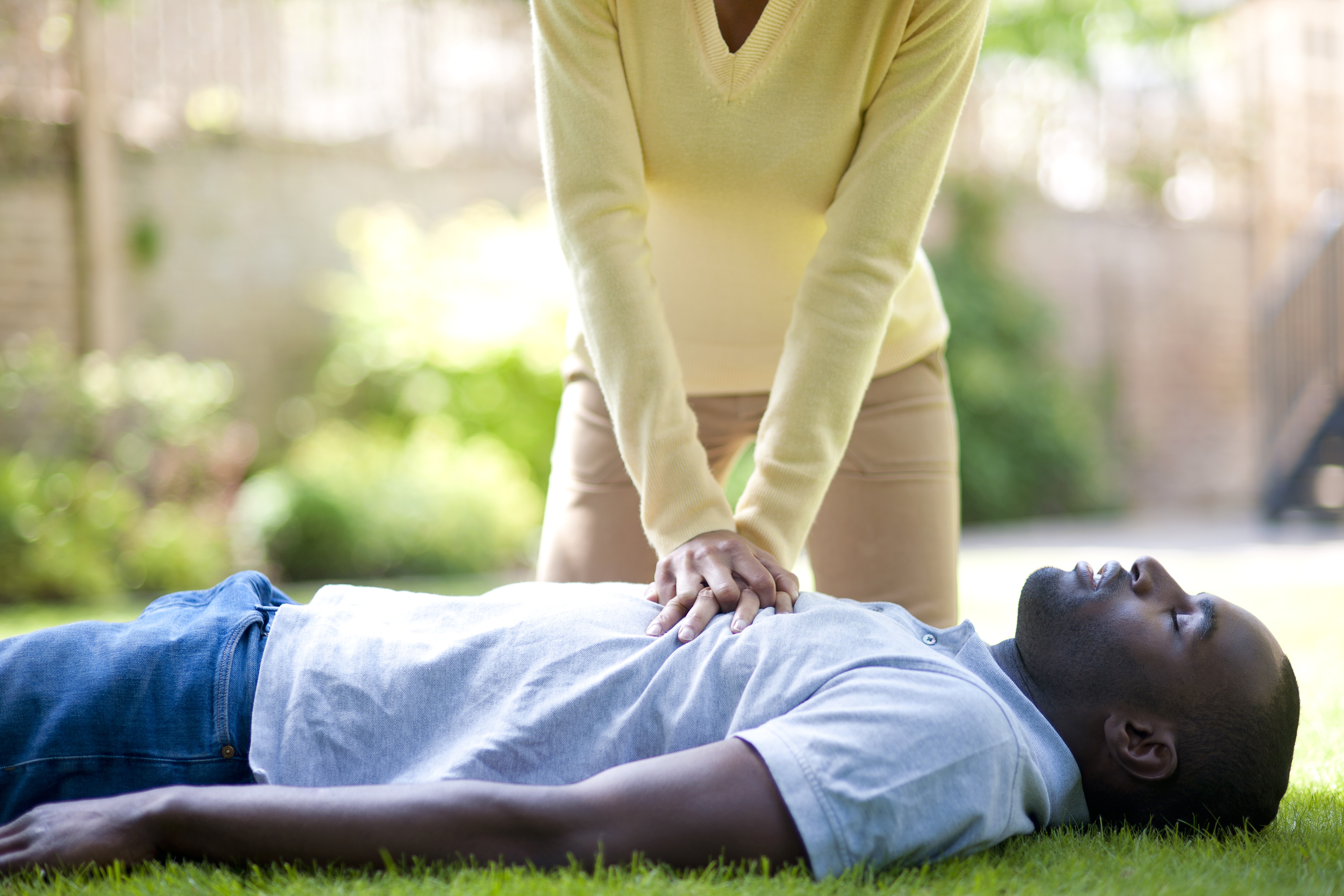 Sudden cardiac arrest is more of an “electrical” problem with your heart, in which case it stops beating or beats extremely fast almost quivering without producing blood flow in either case. When people have sudden cardiac arrest, they are not awake. They are unresponsive, not breathing normally and they quickly need CPR and an AED, or they will die or suffer severe brain damage.

AEDs are sophisticated, but easy-to-use, medical devices that analyze a person’s heart rhythm and, if necessary, deliver an electrical shock to help the heart re-establish a normal heartbeat. They’re more available than years ago, but depending on where the attack occurs, a bystander can become a vital component.

“The biggest thing is knowing CPR and being comfortable performing it,” Kambur said. “I think most people can understand how to perform chest compressions with their hands. You can save a life that way. It could be the life of your family member.”

Here is an American Red Cross video about how to do hands-only CPR that could help save someone’s life.

Coronary artery disease is the most common cause of sudden cardiac arrest, accounting for up to 80% of cases, according to the National Institutes of Health.

Find the heart and vascular care you need in seconds

To reduce the chances of SCA, it’s important to:

Zamudio, rushed by ambulance to Novant Health Presbyterian Medical Center, said paramedics told her she went about 18 minutes without oxygen or a pulse. She remained in a coma for three days, and was hospitalized another 12 days after that. Her lack of oxygen caused an anoxic brain injury. She couldn’t read, write or tell time.

Zamudio’s daughter, a third grader at the time, taught her how to do addition, and how to tell time on a clock again. She needed speech therapy and occupational therapy. Six weeks after the incident, Zamudio had a subcutaneous implantable cardioverter defibrillator (S-ICD) implanted. It is an electronic device that constantly monitors heart rhythm. When it detects an abnormal rhythm, it delivers energy to the heart muscle, causing the heart to return to a normal rhythm.

Zamudio periodically tried to return to running, but doctors convinced her it wasn’t the safest thing to do. She has filled that void with hiking, walks around the neighborhood and mountain biking. She hasn’t returned to her career of being a physical therapist, instead concentrating on taking care of her two children.

She had no underlying conditions that could have signaled her cardiac arrest. Normal weight. Normal BMI (body-mass index). Serious exerciser. Nonsmoker.

“Thanks to God, I was in the right place at the right time, with the right people that stepped in,” she said.

COVID-19 could lead to heart damage in children

What every woman needs to know about stress and heart health