Meet the doctor behind 10,000 epidurals

‘They’re smiling, they're happy and they're thanking you.’
By Roland Wilkerson

When Dr. Bob D’Angelo introduces himself to expecting moms in the hospital, they are probably experiencing the worst pain they’ve ever felt. When he walks out of their room, they are as close to ready to having that baby as they’ll ever be.

There’s an excellent chance the patient will never remember his name. But they’ll almost certainly remember what he did: he administered the epidural that allowed them to experience far less pain than countless generations of mothers before them.

Unlike with most doctors who have a long-running relationship with their patients, an anonymity of sorts comes with the territory in OB anesthesiology. That’s fine with D’Angelo.

“I don't need all the public notification and recognition because we live that experience every day,” he said. “They’re smiling, they're happy and they're thanking you. And that's thanks enough. It’s definitely an honor to be there for one of the most intense and important experiences in their life.”

D’Angelo, medical director of obstetric anesthesia at Novant Health Forsyth Medical Center in Winston-Salem, has helped more than 10,000 laboring mothers since he started practicing in 1992.

At Forsyth Medical Center, he’s a critical part of the care team that cares for women and children in labor and delivery. Since 1914, Forsyth Medical Center has delivered more than 300,000 babies. The hospital has board certified obstetricians and anesthesiologists there round-the-clock and a specialized emergency room created just for expectant moms who need help. 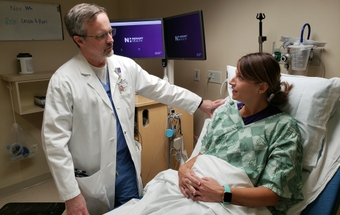 ‘How happy they are’

Before epidurals became commonplace, husbands were dispatched to the waiting room to smoke and pace the floor. And women were often drugged so heavily they didn’t remember the actual moment of giving birth. Sometimes, parts of the experience would start coming back to them two or three days later. Or, the pain was so severe that moms were in agony, which only trigged the fathers’ already sky-high feeling of helplessness.

Even when D’Angelo started his training in late 1980s, only 60% of moms got epidurals. Today it’s 85% at Forsyth Medical Center, and epidurals have come to be administered in a much more effective manner that allow women to move their legs and maintain more control.

“You can really see a difference in how much patients appreciate the experience and how happy they are with their babies,” he said. “It's just great to be involved with that and to see all these changes in  just a relatively short period of time.”

That’s not to say it’s easy, he added. “Even though we think of birth as a natural process, it’s not all ‘natural.’ The patient's legs are placed up on their chests and their head is placed down between their knees and they push sometimes for hours.” That marathon is exhausting and is not always pain-free.

D’Angelo has seen other changes as well.

Despite the thousands of laboring mothers he’s helped, there are births that still stand out for D’Angelo. And two of them – make that four – came in the same family. Back in August 1991, Janet Clayton was an OR obstetrics nurse who was in labor with twins at Forsyth, where she knew she’d be surrounded by team members.

Then a stranger she’d never met walked into her room for the epidural. “Who are you?” she blurted as a young D’Angelo entered. He laughs as he tells the story today. She was puzzled because he’d started while she was on leave. Both those boys arrived without a hitch. Today Ryan Clayton is a respiratory therapist at Forsyth and his twin Justin is a nurse anesthetist at Novant Health Presbyterian Medical Center in Charlotte. Three other siblings also work at Novant Health. (See below.)

Fast-forward to 2019. Janet Clayton’s daughter-in-law – married to the son, Ryan, whom D’Angelo helped into the world 28 years ago – was expecting.  Clayton couldn’t help but ask D’Angelo, “Hey, are you going to be around late summer?”

She was hoping he could be the one to administer the C-section anesthesia for Erika Clayton, an RN who works in critical care transport for Novant Health and who was also expecting twins. Brooks and Harper Clayton were born Sept. 6. It was one of those profound moments for D’Angelo. 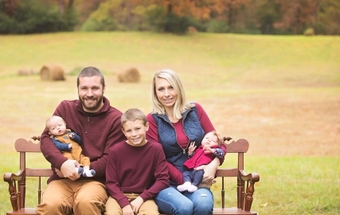 Ryan and Erika Clayton with twins Brooks and Harper and son Ryan.

“It's always extra special when you know somebody that's coming in for labor or for a cesarean delivery and they request that you take care of them,” he said, “that's incredibly rewarding. I absolutely love what I do. You never take for granted how special it is to relieve pain in the way that we do it and have patients remember that experience.”

High-quality care and comfort are the focus of Novant Health maternity services.

Expectant mothers now have their own emergency department

Why skin-to-skin time with baby is vital

All in the family