'It’s all about finding your balance'
By Amber Paddock

Aviva Kaplin knew she wanted to breastfeed her baby daughter, Sage. But at 3 months, Sage suddenly didn’t seem to get that message.

It’s a question new moms like Kaplin take to Penelope Sluder and other lactation consultants at Novant Health, either in the hospital after they’ve given birth, on an outpatient basis after they return home from Novant Health Nursing Mother’s Place, or in one of the nursing classes or support groups offered in communities Novant Health serves. Note: During the COVID-19 pandemic, classes are offered virtually.

The service strikes a fundamental chord with mothers who worry about being judged when they struggle with nursing or watch in frustration as “perfect” moms on the internet seem to pull off the feat with ease.

Lactation consultants give moms support and practical tips about everything from how to help a baby latch to how to pump breastmilk to meeting a baby’s nutritional needs, whether that means exclusively nursing, bottle-feeding or using some formula. They also find out that they’re not struggling alone.

“Breastfeeding’s the most natural thing in the world, but it’s a learned skill for you and your baby,” Sluder said. “Eighty-plus percent of moms initiate breastfeeding. But it doesn’t always come together like she wants it to,” Sluder said. “It’s going to look different for every mom and every baby … It’s all about finding your balance without sacrificing your joy.”

Lactation consultant services provided in the hospital or in an outpatient setting are often covered by insurance. The consultants are experts – certified by the International Board of Lactation Consultant Examiners – but just as important, they’re excellent listeners, said Laura Corsig, lactation supervisor at Novant Health Presbyterian Medical Center.

“We talk to mom and take mom and baby’s health history. We talk to her about her goals for feeding,” Corsig said. “We want to be mom’s coach and help her achieve her goals.”

Corsig wears a round bead the size of a large marble on her badge. It’s a bit of reassurance for new moms. “This is the size of a newborn’s belly,” she explained. “Sometimes mom fears she can’t feed baby and we show them this.”

That combination of information and gentle support was evident at the North Joy Yoga Studio in Winston-Salem recently, where moms and babies gathered for a Novant Health-sponsored nursing support group, called “Baby Café” in some communities. There they relaxed on the floor with their babies, nursed and got their babies’ weight checked by Sluder, who led the group. “It’s really nice to talk to other moms about issues with breastfeeding,” said Kaplin, who arrived with baby Sage. “There’s no judgment. There’s nothing but help and guidance and support.”

The babies seemed to like the experience too, nursing quietly, chewing on toys or sleeping through the entire session. Sluder fielded questions that ranged from dealing with the shift to daylight savings time to choices among bottle brands to sudden changes in a baby’s appetite. Each answer was wrapped in a warm blanket of affirmation.

“Ask yourself, ‘Is this something that meets my parenting philosophy?’” she told one mom in response to a question about weaning her son. “Approach with what you think and see what he thinks about it.”

Kaplin wondered aloud why Sage, who had been sleeping in four-hour chunks, suddenly was waking every hour. Sluder described sleep development, explaining the changes that happen to a baby Sage’s age.

She reassured another mom about her interaction with her infant. “See how good you are at reading him!” she said. “That’s all parenting is – learning how to read that baby and to see what he’s telling you. You’re doing good!”

That mix of medical science and affirmation is what Patricia Kitz needed when she tried to nurse her daughter, Kayla. She wound up frustrated and in pain – think cracking, bleeding and scabbing. “It was just chaos and I knew I could not continue that if I was going back to work at eight weeks,” Kitz said.

She got no help from her early sources of information – some moms’ groups on social media.

In Facebook moms groups, Kitz saw mothers offering pictures of their breastmilk and discussing how much they were feeding their babies. “They encouraged supplements to make your milk fatty,” said Kitz, something Sluder says isn’t necessary. “And I was always comparing myself to another mom and another baby somewhere else.” 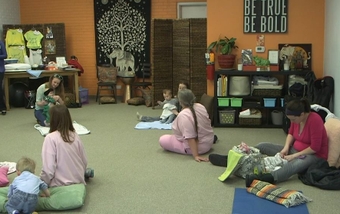 Many right ways to feed baby

Amanda Wagner, who brought baby Addilyn to the Winston-Salem nursing group, said the focus of the consultants – keeping mom’s goals in the center of the discussion – was a continuation of the way she felt heard during her labor and delivery at Novant Health Forsyth Medical Center.

“It was an overall amazing experience,” she said. The medical team honored her wishes about things like waiting to cut Addilyn’s cord so that the baby could be placed immediately on mom’s chest and sending in a lactation consultant right away to answer questions.

The experience contrasted sharply with the one she’d had with her son, Aiden, whom she’d delivered elsewhere. Wagner had wanted to breastfeed him but didn’t get the advice and support she needed and soon gave up. The experience with Addilyn is very different, she said. “She’s a small baby, but she’s growing well,” she said, holding the 7-month-old as she played with her mom’s car keys. “There’s not words for how much support Novant Health has given us.”

As Kaplin and Sage got ready to head home after the nursing support group ended, Kaplin said she’ll keep returning for the answers to questions that arise – and for the reminder that she and her daughter are learning together.

“You can read on the internet and read in books all this contradictory advice” about feeding your baby, she said. “Penelope, one of her lines is ‘There are so many right ways to do things.’ And that puts it all in perspective.”

At Novant Health,  international board-certified lactation consultants can teach you techniques for a successful nursing experience, provide follow-up contacts, and promote confidence in your nursing abilities.

Tags: what moms need to know about breastfeeding, breast-feeding, lactation