The night before his long-awaited stem cell transplant, Tim Cooper treated himself to a big bowl of popcorn. He was told he could be at Novant Health Presbyterian Medical Center in Charlotte for up to 16 days, or as he put it, a “two-week vacation” to eradicate the remaining cancer cells in his body.

He packed his suitcase with all the essentials, including plenty of socks, his well-worn Bible and his laptop, so he could stay on top of his bills. Life doesn’t stop for anything.

Neck and back pain in 2021 led to Cooper’s unexpected multiple myeloma diagnosis. Before doctors could treat it, they needed to address a devastating side effect: fractures secondary to his myeloma bone lesions. Over time, the myeloma had weakened the bones in his neck, an area called the cervical spine, prompting two emergency surgeries.

Radiation and chemotherapy would come next. It’s around that time that Cooper agreed to share his story with Healthy Headlines. (Read pt 1 here.)

The goal, said Dr. Patricia Kropf, a hematologist at Novant Health Cancer Institute - Elizabeth, was to wipe out as much cancer as possible before Cooper would undergo a stem cell transplant.

“I’m a little anxious,” Cooper admitted as he closed his suitcase. “But I’m still holding onto one of my favorite Bible verses, ‘No weapon that is formed against thee shall prosper (Isaiah 54:17).’”

It was a bold declaration of faith for a man facing an incurable disease.

The beginning of the end

The next morning, Cooper’s brother dropped him off at the hospital at 7. He was then transported to the stem cell infusion room on the seventh floor with a view of the city skyline.

For the last year, all of his treatment had been leading up to this moment. The anticipation was palpable.

Kropf had explained at his last appointment that since the treatment had been successful and his cancer was mostly in remission, it was time for even higher doses of chemotherapy to wipe out any residual cancerous plasma cells. While effective, this powerful chemo treatment would also destroy the body’s “good” red and white blood cells and platelets, leaving Cooper susceptible to infection.

“That’s why we recommend a stem cell transplant,” said Kropf. “Before we administer that final round of chemotherapy, we use an apheresis machine to extract and store some of Cooper’s own healthy stem cells from his body. Then, after the chemotherapy treatment, we reinsert those healthy cells back into his body to help restore his immune system.”

Without the stem cell transplant, it would take Cooper’s body upward of three months to start developing healthy blood cells again. But with the transplant, that process is reduced to about two weeks.

Get advanced cancer care close to home, right here when you need us.

Cooper was upbeat as a team of nurses and doctors prepped him for surgery, checking and rechecking that everything was ready to go. Then, everyone paused as Kropf entered the room and locked eyes with her patient.

“Today (March 11) is my new birthday,” he said with a smile that even his mask couldn’t contain. Kropf held his hand in hers and nodded with a reassuring gaze. It was a shared moment built on trust and respect. No additional words were necessary.

Stem cell transplant patients often call their transplant day their new birthday because they are essentially restarting their immune system. The procedure went as planned. Cooper then settled in for his two-week hospital stay, an extra precaution to monitor for what Kropf calls “expected side effects.” Things like nausea, fatigue, diarrhea and low blood count.

Six days later, Cooper sat up in bed and wore a bright green shirt to celebrate St. Patricks’ Day. He felt tired and a bit nauseous, but he called it a good day because his brother, Tony, came to visit.

“It was nice to see someone other than a nurse and a doctor,” he joked.

On March 23, 13 days after his transplant, Cooper packed his suitcase again. It was time to go home.

While still in the midst of the COVID-19 pandemic, Cooper was advised to stay home and limit his exposure to others for roughly 100 days. The goal: Avoid infection while his body’s immune system gradually returned to full strength. He would then go back for a biopsy to see how successful his treatment was at removing his residual cancer cells.

“It was frustrating,” Cooper said. “Besides walking around my apartment complex, I couldn’t do anything. I couldn’t go to the grocery store, go to the mall or even see a movie.”

The one thing Cooper had in abundance was time. Alone with his thoughts, the clock on the wall became an ever-present companion. Tick. Tick. Tick. His mind raced as his faith wrestled with untold rounds of doubt.

"You have to want to recover. I could have easily gone into a self-pity mindset. I could have abused it and tried to get people to take care of me. But instead, I knew I wanted to be independent. I wanted to move forward."

On May 27, Cooper returned to the cancer center to hear the results of his biopsy.

“Tim’s results were very good,” said Kropf. “We were able to decrease the amount of circulating myeloma by a substantial amount, such that he’s no longer at risk for kidney problems and/or fractures. Moving forward, Tim will need to continue on a low dose of maintenance therapy to keep him in remission.”

While Cooper’s diagnosis is still considered “incurable,” that does not mean terminal. In fact, thanks to treatment, Cooper has the potential to live many more years and a very full life.

Some degree of ongoing maintenance therapy is normal and expected for patients with multiple myeloma after a stem cell transplant. Kropf explained that while the cancer has been reduced to such a small and manageable level, the maintenance therapy helps to keep it under control.

Cooper was also cleared to start going back into the world again. He joined a local gym and even started driving his car, a freedom restricted since his neck procedure more than a year ago.

“I got a lot of looks at the gym,” he said. “I still had to wear my neck brace and I remember one young man came up to me out of the blue and said that I was an inspiration. It’s moments like that that keep you pressing forward.”

With his cancer now manageable and in partial remission, Cooper’s doctors turned their attention back to his spine.

After all, Cooper’s cancer was originally discovered during a visit to a neurosurgeon because his neck and back hurt. A scan quickly revealed the cause of his pain: a fracture in his cervical thoracic, the upper part of his spine. But then came worse news: the fracture had been caused by cancer. At the office visit, Dr. John Berry-Candelario explained that the cancer was weakening his spine.

“Myeloma is a disease of the blood cells that we often refer to as liquid tumors,” said Berry-Candelario. “In Tim’s case, the disease attacked his spine, and he was at risk of paralysis.”

Berry-Candelario performed two successful spine-stabilizing procedures in 2021. Cooper was then cleared to start his cancer treatment. At the time, he thought all of his surgeries were behind him, but an unfortunate combination of factors, including his ongoing cancer treatment, further weakened his spine. The weakening ultimately prevented a portion of his recently installed surgical hardware – plate, rods and screws – from fusing correctly with his spine. The result: A third spine surgery was needed.

“It’s been a year since my initial diagnosis,” said Cooper. “While I’d prefer not to have another surgery, I have complete confidence in Dr. Berry-Candelario.”

In fact, Cooper has long felt that his connection with Berry-Candelario, a neurosurgeon who’d joined Novant Health just six weeks before he needed him, felt preordained. Then they bonded over music. Berry-Candelario heard Cooper humming a familiar jazz song, “Tell Me a Bedtime Story” by Herbie Hancock, before his first surgery, and moments later he had it playing through the operating room speakers. (Cooper is partial to a cover by Quincy Jones.)

“I knew I needed to pick a special song for my third and hopefully final procedure,” said Cooper. “So the night before my operation I texted Dr. Berry-Candelario to see if he could play “Finish Strong” by Jonathan Nelson. It’s a gospel song about having a strong finish and a strong faith and I honestly couldn’t think of anything more fitting.”

On Aug. 2, it was playing as he was wheeled into the operating room. He was relaxed and ready. The procedure went well.

“It all comes back to the human experience,” said Berry-Candelario. “Tim has an indomitable spirit. And he has made up his mind that cancer will not define him.”

You don't have to live with neck and back pain. We're here to help.

For the first time in a long time, Cooper can see the light at the end of the tunnel. So far, his spine is healing correctly. His cancer, while still incurable, is in partial remission and with maintenance therapy, could get pushed into a full remission for a period of time. It is important to note that myeloma is still a relapsing disease; at some point, it could and probably will come back. But Cooper isn’t worried since his care team is now in place.

During the last year Cooper’s mother, mentioned more in part one, was also diagnosed with leukemia. It was a tough blow for the family, as she was already dealing with her own battle with multiple myeloma. Fortunately, her doctors are optimistic about her treatment. If there’s a silver lining, it’s that their shared cancer diagnosis brought them closer together than ever before.

Outside of treatment, Cooper has been out of work for more than a year and is getting restless. His cancer, treatments and spine surgeries have sidelined him long enough.

Cooper is currently studying to become a public insurance adjuster, which is admittedly a slightly scary transition from his life-long career in the restaurant industry.

“I don’t want to be on disability for the rest of my life,” said Cooper. “And while it can be scary to get back out there, the biggest thing I’ve learned throughout this entire experience is that you can’t be afraid to fail. Whether it be with your health, or simply applying for jobs.”

“And if you do fail,” Cooper added, “So what? The bigger question is: How are you going to respond?”

Cooper doesn’t consider himself to be special. In fact, he’s the first to admit he’s just another regular guy trying to make it like the rest of us. But he also didn’t want to waste this experience. His tears have a purpose.

While he may never fully understand why cancer became his burden to bear in life, he does hope that his story will encourage others to keep the faith and to finish strong. 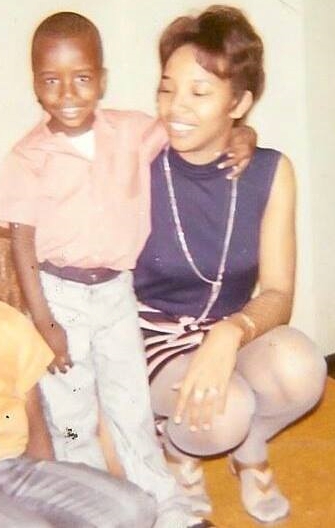 Tim smiles for a picture as a child, alongside his mother, Loretta, who also has multiple myeloma. 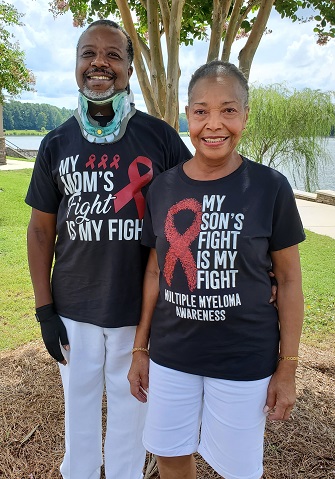 Common myths about cancer and nutrition

How cancer patients and their caregivers can embrace healthy cooking

Want a second opinion? Here’s how to ask.

He went from planning his funeral to ‘doing just fine.’