How a patient squashed fears of COVID-19

Tami Whiteside tugged on an ivy vine in her Charlotte yard last April. It gave way too easily, causing her to stumble. She remembers thinking in the second-and-a-half it took to smack onto the brick walkway “This could be bad. Head, shoulder, elbow, or maybe I won’t hurt anything.”

She instinctively extended her left arm to break the fall. Her wrist snapped on impact. 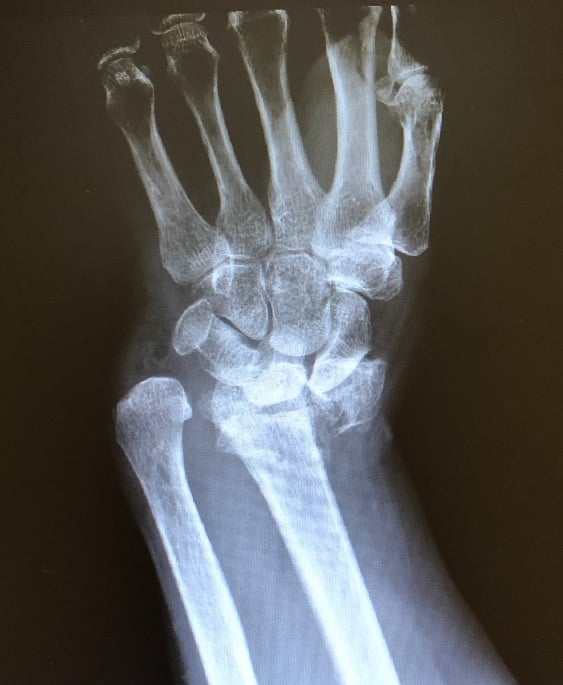 What happened next, in a relatively short time, left Whiteside amazed and satisfied. She, like many at the beginning of the COVID-19

pandemic, was wary of an emergency room. Instead, Whiteside discovered that she had nothing to fear because of enhanced safety measures that she encountered and have remained in place during the pandemic.

Emergency care in a timely manner

Whiteside’s son Beau (he was inside) arrived at her side in the yard. It was shortly before 9 p.m., so they opted for the emergency room at Novant Health Presbyterian Medical Center. Beau drove, as a crying Whiteside cradled her arm, wrapped with an ice pack.

A medical team of five worked quickly to stabilize her arm and fingers soon after arrival.

“They were just very caregiving, focused, sympathetic and empathetic,” said Whiteside. She’d noticed that it was 9 p.m. when she arrived. Twenty minutes later, she’d been X-rayed and diagnosed with a broken radius, chipped ulna and a dislocated hand. An IV line with pain medication brought intense relief.

Novant Health orthopedist Dr. James Romanowski arrived in about 15 minutes. Whiteside had a quick procedure to reposition part of her arm, a prelude to the surgery she’d face in a few days. She was wrapped up, braced and wheelchaired out, where Beau was waiting with the car running.

They were home before 11 p.m., an ER visit of less than two hours.

“The speed with which I was cared for was the most amazing thing,” Whiteside said. “Novant Health’s emergency department was spotless, perfectly staffed and COVID-19-protocolled. It was an awesome experience and I’m grateful. While the world is often avoiding emergency departments, my experience was a rare case of a COVID benefit.”

A return to pushups

Thirty-six hours after the accident, Romanowski (“My hero,” Whiteside said) surgically repaired her wrist and arm. She said she spent a week being “one-handed,” then began recovery work with Novant Health occupational therapist Sarah Reymann to regain range of motion, strength and flexibility in her arm.

“Sarah was wonderful and well-suited to her task,” Whiteside said. “She very much has a passion for what she does.”

Six months after surgery, Whiteside says her arm is about “95 percent.” She works from home as a technical administrator for clients. Typing isn’t a problem. And she’s recovered enough to do pushups.

What advice would Whiteside give to someone hesitant to go to an emergency room or clinic during the pandemic?

“When you walk through the glass doors, there are people there to separate you, take your temperature, screen you and send you in the right direction,” she said. “I would say their fears (of COVID-19) are unworthy. It is understandable, but completely false. If anything, they are safer there.”

How screening helps keep everyone safe at Novant Health