How teams adapted to get patients, families everything they needed
By Ken Garfield

Even in a pandemic, hospice patients are finding the comfort they need. From taping flowers to a window to helping a grandmother meet newborn great-granddaughter Ansley, Novant Health Hospice & Palliative Care has seen to that.

At any given time, 250 hospice patients are cared for by a team that includes doctors, nurses, social workers, chaplains and grief counselors. The goal: helping hospice patients feel the love that often is their best medicine. Palliative care is also extended to those with a serious illness, with the focus on managing symptoms and pain.

Whether hospice patients are at home, in skilled nursing or one of Novant Health’s three hospice units, the mission is to make their days as comfortable as they can be.

And when COVID-19 swept in this spring, it instantly changed everything, said manager Sheri Lowe. “The thing about hospice is, it’s all hands-on. Everyone is a toucher, a feeler, a hugger. They want to make people feel better. And that all had to stop on a dime,” she said.

Afterall, the patients’ condition put them all in a much higher risk category for the coronavirus. Almost overnight, she said, they had to come with new protocols for wearing personal protective equipment, and switch many visits from personal to virtual or phone. Volunteers, just as passionate about care as team members, had to stop making in-home visits, though those have now resumed with a family’s permission, and then with extensive safety equipment.

“We basically had to throw everything up in the air,” Lowe said, “and figure it out one patient at a time.” These four vignettes are just a few examples of how they did it. 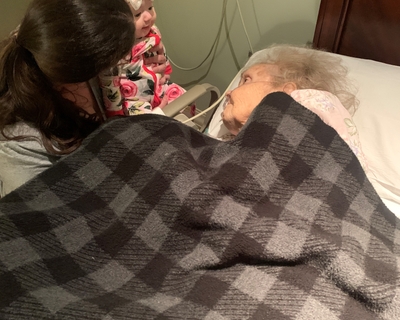 The photograph captures life in all its glory, from beginning to end. Joan Barrier was on her deathbed at the Glenn A. Kiser Hospice House in Salisbury. Her face could never hide what she was thinking. When someone would pronounce her first name “Joan,” she’d frown and say, “It’s “Jo-Ann.” Nearing death, she was at peace, except for one piece of unfinished business. She wanted to meet her sixth great-grandchild, Ansley, born on June 19. Thanks to the Hospice team and particularly Dr. Chetan Amin and nurse Jessica Isbanioly, Joan and Ansley had their moment.

Whitley Barrier carried her baby to the bedside, then placed Ansley in Granny’s arms. That’s what the family called her. Granny didn’t let her oxygen tube get in the way. Ansley wore a pink bow for the occasion. As the two – one 89 years old, the other four months old – got to know each other, Whitley had the presence of mind to pull out her phone and snap a picture (main photo at top). She captured Ansley’s smile. And she captured a look that reflected Granny’s feistiness. In addition to telling everyone she loved them that day, Granny said, “Don’t you let her spit up on me.” Four days later, Joan Barrier died. When Ansley is old enough to appreciate it, Whitley will tell her about the day she met her great-grandmother. And she’ll show her the picture.

The first time Barry Sams watched the parade of cars meant to lift the spirits of skilled nursing residents, there was no vehicle there for him. Barry is 67. He has no living family. His cancer is everywhere. When he mentioned to hospice chaplain Kathy Turner that no one drove past waving for him, she went to work. She and her daughter, Natalie, 12, created a poster declaring “We love you.” She attached it to her minivan with a helium balloon. Then she drove past Barry, blowing the horn for all she was worth. Standing outside the facility, Barry hollered and waved. Turner waved back, the meaning of her gesture clear. Somebody showed up for Barry.

Advanced dementia has robbed Robert (not his real name) of his ability to talk. But he could still hear his wife call him by his pet name, Honey, and say “I love you” through the window of the skilled nursing facility. With her cellphone, chaplain Amanda Lewis has facilitated nearly a dozen video calls connecting Hospice patients and loved ones during the pandemic. For the video call with Robert, she stood with his wife in the shrubs outside his window. Lewis could see where the wife’s walker left an impression in the mulch. The call lasted 15 minutes. Robert’s wife talked about the cat that Robert loved deeply. Robert opened his eyes at the mention of the cat’s name. She shared memories of their favorite restaurants. When they were done, Lewis prayed aloud for healing and safety, and for Robert to be able to feel his wife’s love through the window.

Flowers for the florist

Alice Smith was a no-nonsense woman who always spoke her mind. When Alice knew that hospice social worker Denise McKnight was coming to see her, she would put on the same brand of red lipstick she wore for years. McKnight knew that Alice loved fresh flowers so she’d bring her a bouquet each time she visited.

Greg Smith said his mother’s love of flowers dated back to the 1940s when she and his father ran a florist shop back home in Buffalo. When Alice moved south to be closer to family, she kept up a garden until she couldn’t. McKnight didn’t know this back story. She just knew that the flowers she brought brightened Alice’s room. And that not even COVID-19 was going to put an end to this.

A week or so before the virus claimed Alice at age 96, McKnight taped flowers to her window at the skilled nurse facility. She included a note to Alice explaining why. “To let you know the sun’s still shining outside.”

“Hospice is not about giving up, but about embracing a treatment plan that will allow patients and their loved ones to have the support and care that they need to continue living life to the fullest,” said Sheri Lowe, hospice business development manager. Studies show that individuals who elect hospice can often live longer, as they are free from pain and anxiety and able to have a better quality of life. Here’s how to learn more.

*In the course of doing interviews for the story on Novant Health Hospice & Palliative Care, Ken Garfield had the privilege of talking with Barry Sams. In the last days of his struggle with cancer, Barry shared that he has no living family members. Barry passed away on Nov. 22. With no one to write his obituary, Ken lifted up Barry’s life and legacy. Here is what he wrote.

CHARLOTTE – Every good soul deserves to be remembered.

Wherever life took Barry Sams, he went with a hopeful spirit, even during his final days under hospice care. The activities director at the skilled nursing facility where he lived a few months back said Barry got out of bed every day with a smile no matter how much pain he was in. That was his legacy, and the lesson he leaves us. 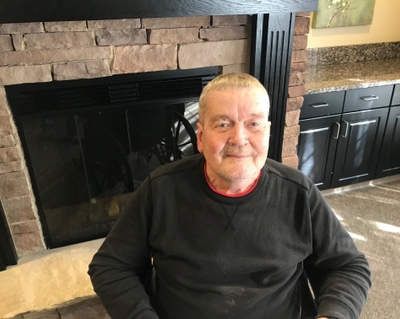 Barry died of cancer on Nov. 22, 2020. He was 67. He believed heaven would be a beautiful place. Barry had no living relatives. He never married nor had children. The love he received came from Novant Health Hospice & Palliative Care and the skilled nursing staffers who cared for him since February.

About the sweetest thing that ever happened to Barry came a few months back. During COVID-19, a parade of cars was organized for skilled nursing residents. No one came for Barry. For the next parade of cars, hospice chaplain Kathy Turner attached a “We Love You” sign to her minivan and honked for Barry. He stood outside, waving back.

Barry was born and raised in Charlotte. He worked in computer operations for banks. He suffered from bipolar disorder. It shaped his life, as it does the lives of 5.7 million other Americans who face this challenge.

You know the paragraph in obituaries in which the deceased has designated a charity to support in his memory? Let us remember Barry not with the gift of money but the gift of kindness for others, especially the lonely and the hurting.

Barry didn’t ask for this obituary. A writer who took an interest in him near the end felt called to tell his story. Everyone’s life is worth celebrating. Everyone has something to teach us in death. That includes Barry Sams, who had no family and suffered from mental illness, but who got out of bed every day, no matter the pain, smiling.

How hospice is about connecting to life

What makes chaplains a key part of your healthcare team?