From ‘orderly’ to ER doctor – a physician’s journey

Aaron Blackshaw’s path to becoming an emergency room physician started at a crossroads that rarely leads to medical school. It was the summer of 2009 and he was wrapping up his freshman year at the College of Charleston in South Carolina. He still hadn’t declared a major and needed to come home to a summer job to put some money in his pocket and somehow keep his battered 17-year-old Ford on the road.

On a lark, he reached out to a family friend at Novant Health Matthews Medical Center who suggested he apply for a “patient transport” position. Once known as orderlies, transporters wheel hospital patients to and from surgery, to various procedures and tests, and finally, out the front door at discharge. (Not one to put all his eggs in one basket, he also applied for jobs at a deli, a movie theater and smoothie shop.)

Blackshaw got the hospital job, and soon found himself learning every corner of the facility – and loving the interaction with patients. He’d been thinking about medicine as a career and his first encounter whetted his interest. “Everybody has a story,” he said. “Patients come from all walks of life.” Blackshaw liked putting people at ease with friendly chit-chat, the tension of a busy night in the ER, stepping in to help when he could, and walking out the door at 3 a.m. into a humid North Carolina night as the rest of the world slept. “I just thought it was really cool,” he said. 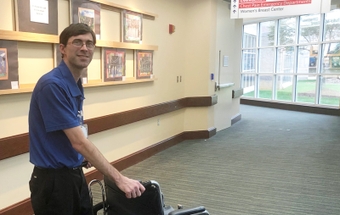 Jimmy Howie, a patient transporter at Matthews, said Blackshaw was a natural. "He went out of his way to make patients feel at ease, put a smile on their face. It’s something you can’t teach – it’s just embedded in some people,” he said. “It doesn’t matter if you’re a janitor or a doctor – making people feel that they are loved, respected and cared for is what we do.”

When Blackshaw returned to school, he declared biology as his major. He’d decided to become a doctor. There was no ah-ha moment that lead to the decision. He just loved the idea of combining science, a lifetime of learning, and working with a team of people. “It’s hard to put into words,” he said. “It just felt right.”

Blackshaw – his mother is a teacher, his father is an insurance underwriter –  graduated undergrad in 2012. He got his M.D. at Medical University of South Carolina in 2016, and then had a three-year residency with the University of Virginia in Charlottesville, which he completed in June 2019. And today he’s back at Novant Health, dividing his time mostly between the new Mint Hill Medical Center and Matthews, where he occasionally bumps into team members who still remember him as a college kid.

On the end of his very first, day, when it came time to hand off to the incoming doctor, it just happened to be Dr. Matt Zban, whom Blackshaw had spent hundreds of hours shadowing as an undergraduate to get a feel for the life of a doctor. Now, they were equals: attending doctors in the ER. The symmetry was fitting.

Or as Blackshaw put it: “My whole first shift, it was just surreal.”

Life in the ER

There are more than 140 million annual ER visits in the U.S. and the numbers are expected to increase as the population continues to age. Substance abuse and mental health issues are among the most common reasons for visits. In some cases, patients have nowhere else to turn.

Zban, 56, describes the job of an ER doctor this way: “We vacillate between the mundane and ‘This person is going to die in the next 3 minutes.’”

He said emergency room physicians need to be quick thinkers who are decisive and always looking several steps ahead. “You’ll make hundreds of decisions every shift.”

He said Blackshaw has a double gift of being “wicked smart,” while also having a soft touch with patients and team members alike. “He’s as humble as he can be,” Zban said.

‘Bit of a sleuth’

On a recent shift at Mint Hill, the patients with complex medical conditions kept coming for Blackshaw.

His first case involved a 51-year-old financial services professional who drove himself from work to the hospital with  severe abdominal pain, which became even worse when he sneezed or coughed. The patient rattled off other conditions: he’d had a kidney clot in July and already had a pacemaker.

In the next room, Blackshaw found a young woman complaining of severe chest pains that had started a few days earlier. She had a history of migraines, once passed out behind the wheel while driving, and had has seen several other doctors – specialists she called “my team” – for various complicated medical issues.

Moments later, he walked in a room to see a patient whose blood pressure was spiking, who felt tingly and was hyperventilating. The patient had suffered a cardiac arrest and stroke in the last year. Team members who knew the patient also suggested he wasn’t telling the full story, making the case harder to manage. 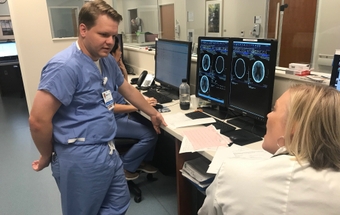 Between patients, Dr. Aaron Blackshaw consults with colleagues on cases.

While many of us think of the ER as filled with cases of flu, simple traumas like stitches or broken bones, Blackshaw said the cases are often complex, with layers of mystery to unravel. “You have to be a bit of sleuth to figure things out,” as Zban said.

But Blackshaw likes the challenge and enjoys specializing in emergency medicine. It keeps him in the action, and provides a lifestyle he appreciates. While there may be plenty of nights and evenings to work, he doesn’t have to worry about the business side of a medical clinic, and isn’t on call, unlike many physicians.

After eight years of college and three years in residency with nonstop training, Blackshaw is relishing the chance to read something other than a medical textbook. He loves having time to himself, and hanging out with his wife Lauren, who has a master’s in counseling and plans to work in the nonprofit world.

As a young physician, Blackshaw knows there’s still plenty to learn and he continues to soak up knowledge by the day. But his early days as a patient transporter still serve as a North Star of sorts. When patients roll into the hospital he quickly learned, they may be sad, scared and anxious about their future. “Try to treat everybody the same,” he said, “and help them out on what might be the worst day of their life ever.”

When the unexpected happens, you need emergency care that you can rely on. Novant Health emergency departments are equipped to care for any medical emergency, 24 hours a day.