For 30 years, Fran Salone-Pelletier has heard the fears and concerns of Brunswick County patients
By  Page Leggett

Fran Salone-Pelletier has been serving Novant Health Brunswick Medical Center patients for so long, she can’t recall when she started.

Her best guess is 1990. That was two years after she and her husband, Jean W. Pelletier, moved to the area. Jean is a married Roman Catholic priest who was looking for a way to minister to the community. He got involved first and encouraged Fran, who has a master’s degree in theology and spent two years as a pastoral counselor, to join him.

She was hooked almost immediately. “It grabbed me more than I grabbed it,” she said. She and Jean share their ministry – along with 12 other volunteer chaplains – and generally schedule their shifts for the same day. But that doesn’t mean they always visit patients and their families as a pair. Each of them sees patients individually. “We divide our time so we can be more effective,” said Fran, the lead volunteer chaplain.***

Discussions around grief and loss are common. “It could be the loss of a limb, a marriage, an animal,” she said. A spouse, parent or child. Or a pregnancy. Pain and suffering are other recurring themes.

Being present for people during a painful, uncertain time is the most important thing she can do, she said. “People often don’t want to talk; they just want someone to be there.” When someone is ready to talk, Fran is ready to listen. “I’m not there to fix anything,” she said. “I’m there to listen to the pain and to reflect the pain.”

But she can also empathize – and from a deeply personal place.

Fran was seriously ill in 2011, and doctors told Jean he should begin planning her funeral.

She survived her illness but still bears the physical evidence of it. She has an ileostomy, an opening in the belly through which intestinal waste passes. It’s collected in an external pouch adhered to the skin.

She’s willing to show it to patients who are fearful about how an upcoming procedure may upend their lives. “There was a woman who was getting ready to have the same operation I had,” Fran said. “I thought it might put her at ease if I showed it to her. I’m at ease with it. Life experience is the most effective source for our work as ministers.

“And I do call this a ministry,” she added.

But that doesn’t mean her counseling sessions are religious experiences. Fran ministers to people of all faiths, as well as people of no faith. “We don’t have any preconceived notions when we visit people,” she said. “I don’t identity myself as a Roman Catholic. If someone asks where I go to church, I’ll give them the name of my parish. We take our cues from patients.” 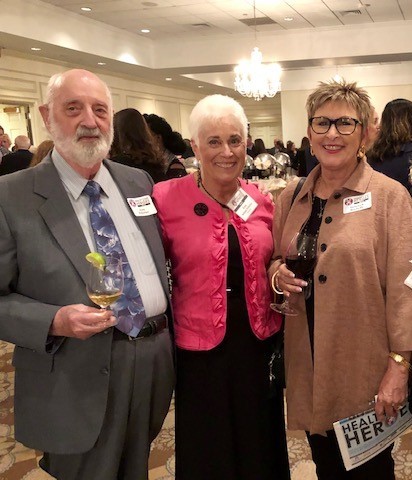 Deborah Rochelle, corporate manager of volunteer services, gift shops and health and humanities, said patients feel comfortable with Fran immediately. Rochelle has known Fran for nearly 20 years and served as her manager for several of those. “Fran shines her light everywhere she goes,” Rochelle said. “When she looks at you, you feel you’re in the presence of a holy person. She’s a beautiful writer, a deep thinker and has been a mentor for me. She’s my safe place.”

Fran’s last question before she leaves a patient’s room: Is there anything else I can do for you? Very often, the patient asks Fran to pray for him or her. She’ll ask, “Would you like me to do that now?” If the patient does, they’ll pray together.

Fran is well-known in the community for her decades of service. She’s won awards and been written about in local publications. And she and Jean were there in the aftermath of one of the community’s greatest tragedies – the 2007 four-alarm fire in an Ocean Isle Beach home that killed seven of the 13 college students staying there for a weekend vacation.

Family members of the victims gathered at the hospital, awaiting news. “They were too traumatized to talk,” Fran recalled. “But Jean and I let them know we were there. The fact of our presence, we hope, was a balm during that tragedy.”

From respiratory therapist to hospital president

What makes chaplains a key part of your healthcare team?