Dr. Ophelia Garmon-Brown’s energy and commitment to serving others long amazed her patients, colleagues and community. So, it shouldn’t have come as a surprise when she refused to let cancer interfere with her life of service.

And yet, “Every time I show up somewhere,” she mused, “somebody’s surprised.”

The Novant Health family physician was treated for cancer in 2012, 2014 and again in 2016. That’s when she learned she had a brain tumor and cancer in her right kidney. She continued to receive treatment in a long and valiant battle with the disease. She passed away on Nov. 17, 2021.

She thought her journey may prove useful to others. So, she set out to share her story and those of other survivors. “The Unexpected Gift: Profiles in Courage from Cancer Survivorship” speaks directly to people who have gotten a cancer diagnosis, as well as their families and friends.

The book explores the stories of 20 other cancer survivors. Every one illustrates how adversity can become an opportunity.

About that unlikely title, she said, “cancer itself is not a gift, but how you deal with it can turn it into one.” Her book is uplifting, empowering and hopeful.

The book was conceived as a way to help “people who have had this devastating diagnosis placed upon them … to find some hope in it, somewhere,” Garmon-Brown said.

You can readily find hope in Garmon-Brown and the way she continued to live life, even as she underwent years of treatment. She wanted to inspire people living with cancer to do the same – and to be able to say, “OK, I have this diagnosis. But this diagnosis is not me.”

“Don’t bury yourself in the fear and pain of it,” she said. “Be inspired.”

It’s totally in keeping with Garmon-Brown’s outlook that she would use her own experience to offer hope to others who need it. 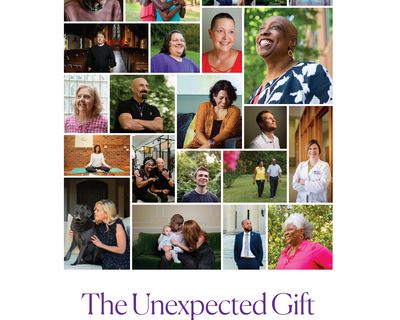 “The Unexpected Gift: Profiles in Courage from Cancer Survivorship” speaks directly to people who have gotten a cancer diagnosis, as well as their families and friends.

“I remember the day she received her diagnosis,” Carl S. Armato, president and CEO of Novant Health, wrote in the book’s foreword. “We hugged each other; we cried. But I watched her quickly take that diagnosis and turn it into something that became a gift through which she could help others. I had watched her convert challenges before, but this was the ultimate example of seeing something positive in something so apparently devastating. And with that transformation, she has lifted up our entire community.”

Garmon-Brown was always a leader. Not just at Novant Health, but in the Charlotte community. Along with U.S. Bank executive Dee O’Dell, she co-chaired the Charlotte-Mecklenburg Opportunity Task Force.

The task force was formed in early 2015 in response to a 2014 study that found Charlotte was dead last among the 50 biggest cities in the U.S. for economic mobility – the ability to improve one’s economic status. The task force’s goal: Nothing short of breaking the cycle of generational poverty.

Garmon-Brown addressed poverty from two angles. As a physician, she was concerned with public and individual health. As an ordained Baptist minister, she looked at the problem from a spiritual perspective. For her, eradicating poverty is a moral imperative.

Her own cancer diagnosis made her think of those for whom cancer is a one-two punch – a scary disease with treatment whose costs are unfathomable. In a 2017 Charlotte Observer story, she said, “I don’t fear cancer. I have faith. And I have health care … When one does not have access to health care, what can one hope for?”

Garmon-Brown always exuded hopefulness. Armato said she “has a knack for opening emotional, intellectual and spiritual doors to usher you into a quiet place of hope.”

She received many accolades for her work. (The Charlotte Observer’s “Woman of the Year” in 2010, the North Carolina Academy of Family Physicians’ family physician of the year – one of two – in 2012, among others.) But she never clung to those awards. She had the simplest wish for her legacy.

She hoped people will say: “She served.”

All proceeds from the sale of The Unexpected Gift, available on Amazon, will benefit the Novant Health Foundation.

Here's what a lot of us get wrong about grief