Woman beats the 'other' incontinence – and you can too

‘You talk about crying out of embarrassment. It was always in the back of my mind.’
By Josh Jarman

More than 5.5 million Americans have fecal incontinence, the inability to control bowel movements, causing stool to leak without warning from the rectum. It’s more common in older adults and in women, according to the American College of Gastroenterology.

Milagros had multiple episodes each week – sometimes two or three times a day. That was until earlier this year when she met with Dr. John J. Smith III, a urologist at Novant Health Pelvic Health Center in Winston-Salem. Smith recommended a minimally invasive surgical solution that changed her life forever.

Life in the big city

Milagros, 61, grew up as a proud, first-generation Puerto Rican in the Bronx, New York. As the oldest of five, she often helped her dad, who was the superintendent of their apartment building, paint walls, change light bulbs and shovel coal in the winter.

“Our neighborhood was very diverse,” she said. “I’ll never forget one block party we had in 1969, that’s when I learned about afros, platform shoes and bell-bottoms. Growing up in my diverse neighborhood I had many Hispanic friends, as well as black and white friends, of Jewish and Catholic backgrounds. There was no prejudice. We all did life together.”

After graduating high school in 1975, she married and had two children. After the birth of her oldest, she landed a factory job in the city – this was not her dream job. Then a co-worker said, ‘Milagros, you are too smart for this kind of work. Go, and do more.’”

More than a calling 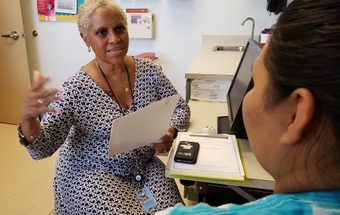 Milagros Amaro at the health department.

In 1999 she landed in High Point, North Carolina, where she became a bilingual international account manager for a large furniture company.

“I loved what I did, and I had a lot of success with that, but I knew I wanted to do more in life to help people.”

She found what she was looking for at the Guilford County Health Department in 2005, where she became an interpreter to help non-English speaking patients feel comfortable during clinic visits. Today, she is the Multilingual Services Coordinator for the Limited English Proficiency Program. She also serves as an HIV counselor, as a phlebotomist and as an instructor at Forsyth Technical Community College in Winston-Salem.

As an interpreter, “I often remember going with my father to social services to apply for food stamps and unemployment,” she said. “I have seen it all first-hand and so for me, it is extremely gratifying when I’m able to help people feel comfortable and get the care they need.”

As part of her plan to ‘do more,’ Milagros went back to school to complete her bachelor’s degree at the University of North Carolina at Greensboro (UNCG) in 2014. 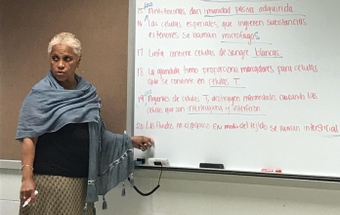 For Milagros, everything was back to normal, or so she thought. It was not until 2013, a year after her cancer treatment that urinary and fecal incontinence developed as a side effect. “You know that feeling when you need to go to the bathroom, and you squeeze your pelvic muscles together to hold it until you can make it? I realized I could not do that anymore on either end, and as a result I had accidents all the time.”

Unwilling to wear diapers out of fear that someone would see them, she spent hundreds of dollars on pads and often brought multiple backup outfits to work each day. She also had to change her eating habits and avoid going to restaurants or social events with friends and family.

“You talk about crying out of embarrassment,” she said. “It was always in the back of my mind, what if I am with a client and it happens, will I make it to the bathroom in time? More times than not, I didn’t.”

Despite countless trips to specialists, every treatment option ended with another increasingly frustrating accident. “For six years, I lived in constant fear and embarrassment.” 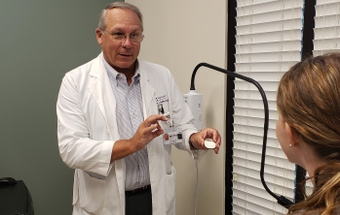 Desperate for answers, she attended an open house at the Novant Health Pelvic Health Center in Winston-Salem where Dr. John Smith explained that urinary and fecal incontinence are both common issues that patients are sometimes afraid to bring up. These symptoms are often caused by neurologic issues and in Milagros’ case, as an unfortunate side effect of her cancer treatment.

At the Pelvic Health Center, fecal incontinence is assessed by a simple physical exam and a diagnostic test known as an anorectal manometry. This test helps the surgical team of urologists, colon-rectal surgeons and gynecologists determine the best treatment option for the patient.

Treatment can vary from surgical repair to physical therapy to InterStim, a neurologic input solution also referred to as sacral neuromodulation therapy.

“When you put your hand over a candle you sense heat,” said Smith. “And because of that sensation, you pull away. Sensation and motor function go together. In the same way, we can modulate nerves to function with muscles. Thanks to this device, we can stimulate the sacral nerve to help the brain, spine and bladder better communicate.”

Milagros felt encouraged but not yet ready to make a decision. “At that point, I was still working with other doctors and trying new diet modifications.”

It was not until three years later that she became so disgusted after yet another disheartening accident that she decided to go back to the Novant Health Pelvic Health Center. “I remember meeting with another specialist who told me that I had two choices,” she said. “I could either wear a colostomy bag for the rest of my life, or I could try the bladder pacemaker procedure to treat both my urinary and fecal incontinence.”

After experiencing another embarrassing accident that resulted in an infection, she made the decision to go back to Smith to give the bladder pacemaker a try.

Smith explained that the pacemaker procedure, known as Medtronic Bladder Control Therapy delivered by the InterStim system, involves a two-step surgical process. The first step allows patients to “test the results” by inserting a wire in the patient’s lower back and connecting it to the sacral nerve. The other end of the wire is attached to a handheld pacemaker that is discreetly taped to the outside of the body. The patient is then asked to sample the therapy for about a week to see if it helped reduce their overactive bladder symptoms. If successful, the second minimally invasive outpatient procedure is scheduled to insert the pacemaker into the patient’s lower back.

Milagros’ first procedure was successfully completed on Feb. 19, 2019, at Novant Health Medical Park Hospital in Winston-Salem. During the trial period, she recalls trying to temper her excitement. “I used to talk about my frequency of accidents, now I was measuring my infrequency of them.”

Pleased with the outcome, Smith completed the concluding procedure on Feb. 26, 2019, at Medical Park Hospital. Today, her incontinence issues are a thing of the past. 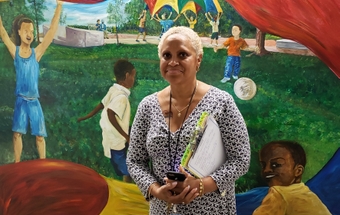 “Dr. Smith gave me my life back,” she said. “I have been to a lot of doctors over the years, but when I walked into the Pelvic Health Center, something was different. I had renewed hope and I could tell those doctors and nurses truly cared about me.”

Milagros wants to get back to focusing on making a difference in the world. “I want to make a mark in somebody’s life the way everyone else has done for me. You know my name [Milagros] means miracle and my last name [Amaro] is from the verb for love. If I can be that miracle of love for someone else, that would make my day.”

Milagros has been asked by several community groups to share her story. “I want to tell people that they can stop living in fear. Help can be found right here in our backyard.”

As opinions shift on prostate cancer, here's what men should know